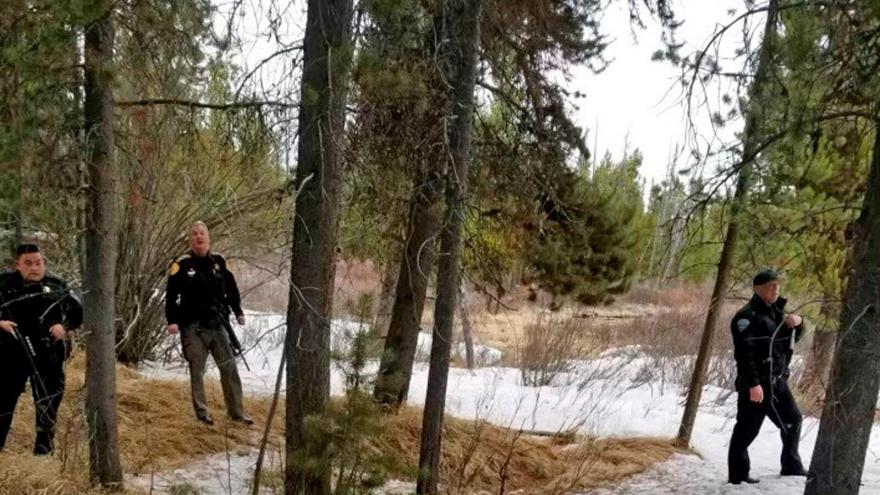 In this photo provided by the Gallatin County Sheriff's Office, officers from the sheriff's office and West Yellowstone Police Department are seen near the scene of a grizzly bear mauling just outside Yellowstone National Park near West Yellowstone, Mont. on April, 15.

(CNN) -- A backcountry guide died Saturday after being attacked by a grizzly bear near Yellowstone National Park, according to officials.

Charles "Carl" Mock, 40, of West Yellowstone, was alone fishing west of the park in Montana on Thursday when the bear attacked, according to a release from the Montana Fish, Wildlife & Parks.

"The man had bear spray with him, but it's unclear whether he was able to deploy it during the attack," according to a release from the department. He was transported to Idaho Falls for treatment of severe injuries.

Mock had two surgeries before suffering a stroke and passing away Saturday from injuries sustained during the mauling, according to the Facebook page for Charles Mock's employer, Backcountry Adventures -- which provides snowmobile rentals, guide services and snow coach tours in the area.

A group of seven investigators, including Forest Service personnel and bear specialists, returned to the attack site on Friday to assess ongoing public safety risks and conduct an investigation. Before reaching the location of the mauling, a bear described as an "older-age male grizzly" began charging the group.

"Despite multiple attempts by all seven people to haze away the bear, it continued its charge. Due to this immediate safety risk, the bear was shot and died about 20 yards from the group," according to the news release.

Investigators later found a moose carcass within 50 yards of the site of Mock's attack. This would indicate the grizzly was likely defending a food source, the statement said.

The National Park Service says that since 1979, Yellowstone has hosted over 118 million visits. During this time, 44 people were injured by grizzly bears in the park.

For all park visitors combined, the chances of being injured by a grizzly bear are approximately 1 in 2.7 million visits. The risk is significantly lower for people who don't leave developed areas or roadsides, and higher for anyone hiking in the backcountry.

Grizzly bears in the lower 48 states are listed as threatened under the Endangered Species Act, according to Montana Fish, Wildlife & Parks.