Back to the doctor's office? Here's what's next for telehealth after the pandemic 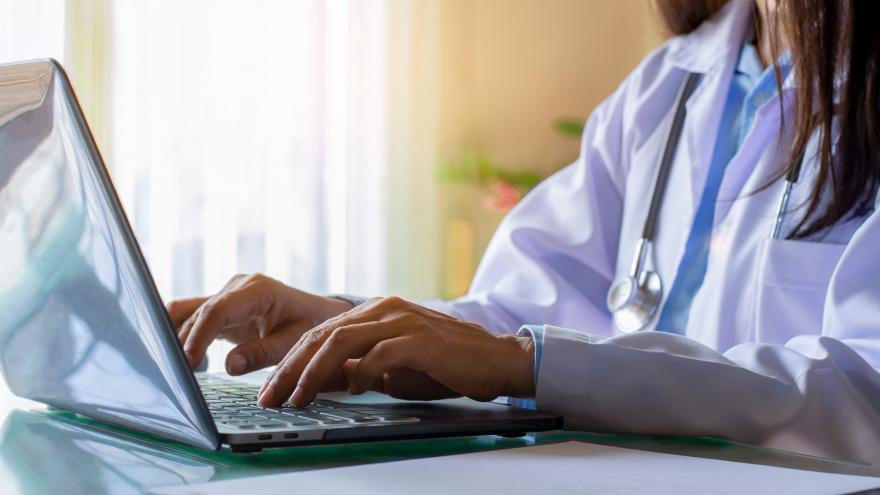 (CNN) -- It all started with a toothache.

That's what brought Gary Poteat into the doctor's office. But several appointments and a biopsy later, Poteat discovered that he had malignant kidney cells in his jaw, the result of stage IV kidney cancer -- something that only 14% of people survive with in the first five years of diagnosis.

Fifteen years after a diagnosis that felt like a death sentence, Poteat continues to beat those odds. However, that means he is a complicated patient requiring specialized care that can require him to travel thousands of miles from his home in Central Ohio.

When Poteat's cancer recurred, he found that one pandemic-era change made a crucial difference in his care: telehealth.

Poteat had been cancer-free for two years until January 2021, when his cancer spread to his liver, pancreas and lung. He found a doctor who could do the type of specialty surgery he needed -- but who was also a four-hour drive away, in Cleveland.

Amid the Covid-19 pandemic and an Ohio winter, the idea of traveling so far for multiple appointmentswas daunting.

"It's just harder for us to travel, and of course, most cancer patients are older people. And travel is not easy ... especially if you're a long-term cancer patient, you may have some medical problems," said Poteat, 69.

But then came the option to do his appointments remotely and from the comfort of his own home, through telehealth.

"They got back and said 'we can do all this [through] telemedicine instead of you having to drive an eight-hour round trip, spend the night -- three times,' " Poteat said.

Over the span of a week and a half, Poteat saw three specialists through telehealth.

"It's hard to describe how the little aggravations of life, like traveling in the snow, fighting cold weather and staying in hotels, how much stress that puts on someone who's already at maximum stress from the fact I have new tumors and we don't know what we're going to do," Poteat said. At such a critical point in his cancer journey, telehealth felt like a "blessing."

For millions of people like Poteat, pandemic-era telehealth flexibilities have made health care much more accessible.

However, those flexibilities are set to expire 151 days after the Covid-19 public health emergency ends, outlined as part of the $1.5 trillion omnibus spending bill signed by President Biden in March. The emergency was last renewed April 13 for another 90 days.

Expanding telehealth in a crisis

Over the course of the pandemic, use of telehealth has grown exponentially, necessitated mainly by efforts to minimize person-to-person contact.

According to a report from the US Department of Health and Human Services, more than 2 in 5 Medicare beneficiaries used telehealth services in the first year of the pandemic, amounting to at least 28 million people. The number of telehealth visits also grew 63-fold in 2020. And the trend continues; 20% of US adults used telemedicine during the first two weeks of March,according to the US Centers for Disease Control and Prevention.

Before March 2020, people had to be in a rural area or a place with medical personnel shortages to qualify for telehealth services under Medicare, and services could be accessed only through specific medical facilities.

However, during the Covid-19 public health emergency, coverage expanded to allow people to receive telehealth services in urban areas and from their own homes for the first time -- sometimes even across state lines. Another big change was the introduction of audio-only services, in which health care could be provided through a phone call.

Likewise, most people who are covered under private health insurers should expect similar coverage. In 42 states and the District of Columbia, private insurance providers are required to reimburse telemedicine costs.

"I can actually see more people in suburban or rural areas that otherwise may not have had the same level of access before," said Dr. Stephen Parodi, an infectious disease physician and executive vice president for the Kaiser Permanente Federation. "We want to preserve that."

When stay-at-home orders went into place and addiction recovery centers closed across the country, telehealth served as a bridge to continuity of care.

"What the flexibility of telehealth allows during Covid was to shift gears extraordinarily rapidly," said Dr. Shawn Ryan, a regional director of the American Society of Addiction Medicine. "We were basically able to further our mission of barrier reduction and meeting the patient where they're at."

Transportation is one of the most common barriers to receiving addiction treatment and one that won't disappear once the public health emergency ends, Ryan said.

During the pandemic, the US Drug Enforcement Administration temporarily relaxed rules around prescribing controlled substances such as buprenorphine, a treatment for opioid use disorder. Doctors can now prescribe the medication after a video visit with a patient, rather than an in-office one.

"As far as we can tell from what data is being collected, [that] resulted in better patient care and retention," Ryan said.

However, this is another flexibility that patients are at risk of losing once the federal public health emergency ends.

There are certain challenges that come with making addiction care virtual. For one, it's difficult for addiction specialists to monitor whether their patients begin using again or are taking their medication as directed.

"So my encouragement is for folks to be nimble and objective in assessing, what should it look like going forward? And not just pushing the dial one way or the other," Ryan said.

The future of addiction care will probably benefit from a combination of telehealth and in-person care, but that won't be possible if rigid prepandemic telehealth restrictions continue, Ryan said.

Some changes are here to stay. According to the federal Medicare Payment Advisory Commission, mental, behavioral and neurodevelopmental health accounted for 25% of the charges for telehealth in the first year of the pandemic. Now, behavioral health services,like individual and group therapy, will be permanently available through telehealth, even after the end of the public health emergency.

The White House says ithas recognized the impact that telehealth has had in improving access to mental health care, and it's even one of Biden's key strategies to addressing the country's mental health crisis.

Dr. Andrew Booty, a psychiatrist and volunteer clinical faculty at the UCSF School of Medicine, said telehealth expansions helped eliminate some barriers to access for his patients. Gone were long wait times, commutes and transportation costs.

"When we don't have to rely on particular physical exam findings ... video can be almost as efficient as seeing somebody in person, and in some ways better, given the access issues," Booty said.

Booty noted that somethings are harder to observe over a screen, like nuances in body language or how someone carries themselves into a room.

Still, he said he would rather be able to see patients "with increased frequency over video than either not be able to see them or see them much less frequently because of [limited] access."

Seeing the benefits afforded by the expansion of telehealth, some lawmakers are pushing Congress to consider making more telehealth flexibilities permanent.

The Telehealth Response for E-prescribing Addiction Therapy Services, or TREATS, Act would permanently allow certain controlled substances, such as buprenorphine, to be prescribed online after a video consult with a provider.

The CONNECT for Health Act has also received bipartisan support in Congress. The bill was introduced in 2016 by Hawaii Sen. Brian Schatz, and a revamped version was reintroduced last year in response to the overwhelming use of telehealth over the pandemic.

According to Schatz's office, the earlier version of the bill didn't garner much interest, but that changed over the course of the pandemic, as lawmakers realized the dramatic role telehealth has played in expanding access to care.

"The last year has shown us that telehealth works, it's popular, and it's here to stay," Schatz said in a statement in April 2021.

But given the time it often takes bills to move through Congress, providers and patients alike have depended on renewals of the Covid-19 public health emergency to keep the telehealth expansions going.

In the meantime, according to a CMS spokesperson, individual states can choose to make telehealth expansions permanent. Illinois became one of the first to do so last year, when Gov. J.B. Pritzker signed a bill that allowed coverage of telehealth expansions made during the pandemic to continue into 2027.

For Poteat, the expansion of telemedicine was a silver lining of the Covid-19 pandemic. But now, faced with the possibility that all those expansions may not be permanent, he worries that he won't be able to get the same quality of care he's gotten these past two years.

"Covid made telemedicine possible," he said. "It would be such a shame if we've lost that tool for patients to get the best specialist care."

In keeping with goals to increase access to health care, there is still work to be done to make telehealth equitable.

HHS found that rural and Black Medicare beneficiaries had fewer telehealth visits than other groups during the first year of the pandemic.

"The issues of hardware, software, data connection, Wi-Fi -- all those things came to bear when [patients] were at home. Where could they go if they didn't have it at home?" Ryan said.

The future of telehealth is thus dependent on assessing each person's needs.

"If we just think of a one-size-fits-all model, it's very likely you're going to end up increasing inequities," said Sinsi Hernández-Cancio, vice president for health justice at the National Partnership for Women & Families, during a Kaiser Family Foundation discussion on the future of telehealth in March.

Ensuring that people have access to broadband and that medical centers have software that can protect patient's privacy will be expensive. Hernández-Cancio said that although the upfront cost of improving the technology may be steep, it is an investment that could save money in the long term as more people get the care they need.