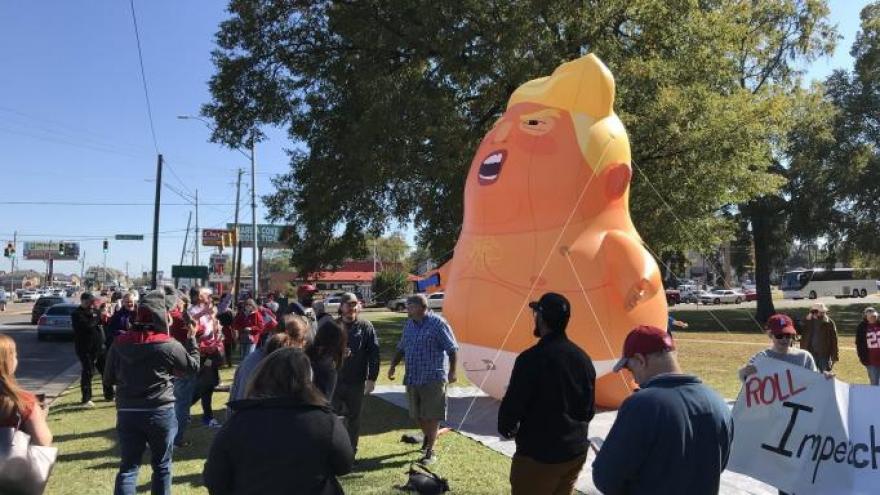 A 20-foot tall balloon resembling President Trump has made an appearance at the highly anticipated college football game between the University of Alabama and Louisiana State University.

(CNN) -- The "Baby Trump" balloon has been slashed -- and as a result, deflated.

The popular protest symbol against President Donald Trump was floating among the throngs of college football fans in Tuscaloosa, Alabama, on Saturday when it was attacked by a man, an organizer of the protest told CNN.

At about 2:30 p.m. ET, before the kickoff between Alabama and Louisiana State, an unknown man came up to the balloon and stabbed it, according to Nic Gulas, one of the people who organized the "Baby Trump" balloon appearance at the game. The balloon deflated after the gash, Gulas said.

"It was a random dude just ran up to the balloon, stuck a knife in it, and ran off. We had police close by because of another driver earlier, so they went over and arrested him and his getaway driver," Gulas told CNN through Twitter.

Tuscaloosa Police Department officers responded to the incident and observed Hoyt Deau Hutchinson, 32, of Tuscaloosa, cut into the "Baby Trump" balloon, and then attempt to flee the area, according to a statement released by police.

Officers apprehended the suspect and took him into custody on a charge of criminal mischief first degree, the statement reads. Hutchinson was booked in Tuscaloosa County Jail where he was held on a $2,500 bond.

The balloon stood roughly a mile from Bryant-Denny Stadium where the Crimson Tide and Tigers -- two of the top teams in college football according to the Associated Press -- battled to a 46-41 victory for LSU. Trump attended the game and received overwhelming cheers from the crowd in what was his third time appearing at a major sporting event in the past two weeks.

In preparation for Trump's appearance, Gulas helped organize a GoFundMe campaign to raise $4,000 in order to bring the "Baby Trump" balloon to the game. The campaign ended up collecting $7,882 in two days.

Ahead of the game, Gulas told CNN earlier that the balloon could be found near the corner of Hackberry Lane and 15th Street.

"So the atmosphere is good, honestly. Have a lot of protesters out in front of it. Every now and then a car will shout out like 'Trump 2020!' or 'Keep America Great!,' but it's been mostly positive," Gulas told CNN via Twitter.

The "Baby Trump" balloon quite literally rose to prominence in July 2018 after it was seen floating over Britain's houses of Parliament for two hours during widespread protests against Trump's visit to the United Kingdom. Leo Murray, an activist who organized the blimp's appearance in London, told CNN at the time that the giant balloon had been designed to speak to Trump "in a language that he understands, which is personal insults."

Since then, the balloon designed by Matt Bonner has appeared in a number of places, including New Jersey and Scotland.