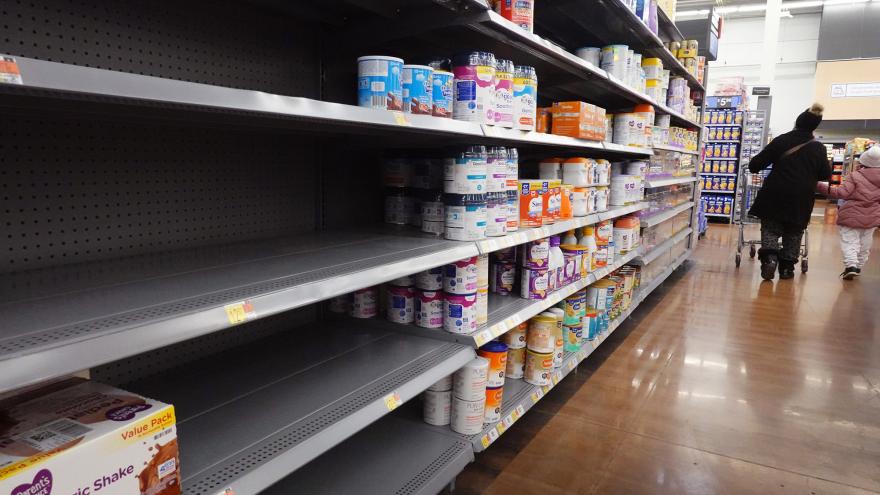 (CNN) -- Loan Nguyen is a new mom living in a constant state of anxiety.

For the past several weeks, following the premature birth of her twins, Maxine and Lawrence, Nguyen has spent hours every day searching the internet or making phone calls trying to find more baby formula to buy for them.

"I'm a first-time mother. There's already enough anxiety with that," she said. "My husband sees my stress level and he's worried."

The twins require a specialized, hypoallergenic formula to help them gain weight and get the nutrients they need.

"I just can't find that formula anywhere," Nguyen said. She's doing daily checks at nearby Walmart, Target and CVS stores only to find the product is either out of stock or on back order, with no clear indication of when it will arrive. She's even had to deal with a confirmed order getting canceled.

"It's very frustrating and scary," Nguyen said. "I've been searching for it in towns three hours away from where I live. Why can't I just go into a store and be able to buy formula?"

Nguyen's concern has been echoed by many parents on Facebook, including those relying on nutrition assistance programs, such as the federal Special Supplemental Nutrition Program for Women, Infants and Children (WIC). They are sharing stories of their frantic efforts to obtain infant formula.

Retailers nationwide have struggled to keep shelves fully stocked with all kinds of everyday necessities as supply chain problems persist, slowing down both production and distribution of goods. At the same time, consumer demand remains robust.

According to market research firm IRI, stores' infant formula inventories in mid-January were down 17% from where they were in mid-February 2020, just before the pandemic hit US shores.

Drugstore chain Walgreens, which had alerted its customers about isolated formula shortages at its stores nationwide in November, said it is still facing tight inventory.

"We continue to see greater demand for baby formula nationwide, and as a result Walgreens has worked diligently with our suppliers to ensure we have enough supply to cover customer demand," the company said in a statement to CNN Business. The retailer said shoppers could continue to see temporary or isolated shortages of specific formula products.

An Amazon spokesperson said the retailer is working closely with its vendors to get formula products back in stock as quickly as possible, and Walmart said any shortages of formula at its stores were related to capacity issues on the manufacturers' end.

"We're continuing to work with our national brand baby formula vendors to address this issue and we regret any inconvenience that our customers may be experiencing," the company said in a statement to CNN Business.

Meanwhile, a spokesperson for the US Department of Agriculture, which runs WIC, said its Food and Nutrition Service is in regular communication with state agencies and has met with infant formula manufacturers about the issues they're experiencing and their plans for mitigating the supply chain challenges.

The spokesperson said state WIC agencies have been able to resolve localized issues with formula availability, but that the federal agency will continue to closely monitor the situation.

For Jennifer Hood, not being able to easily find formula for her eight-and-a-half-month-old daughter is more than an inconvenience.

Hood, who works as a speech-language pathologist in a newborn ICU at a DC-area hospital, said she was left scrambling to find specialized formula for her baby, who is allergic to cow's milk, when a recent order for it was delayed by over a month.

The formula is vital to feed her daughter who isn't able to tolerate breast milk and has been fed with the formula since she was two months old.

"I drove two-and-a-half hours away to find it," Hood said, "and there was just a can or two left of the formula at the store."

Hood said she's aware of families mixing brands, or even watering down formula to make it last longer. Both tactics can cause digestive issues and be dangerous for infants.

In a statement, the group acknowledged reports of challenges across the supply chains, including impacts on transportation, labor and logistics. "Members of INCA are committed to meeting the needs of families who rely on infant formula — it is their top priority," the group said.

Reckitt Benckiser, maker of Enfamil, said it's aware that some parents are having a difficult time finding the brand of formula they need.

"We have taken steps to ramp up production and are currently shipping 30% more product to address issues as fast as possible," the company said in a statement. It added it has ample supply of its products, but noted that "US baby formula industrywide sales are up 17%, which is more than double what birth rates and other indicators predicted."

Similac-maker Abbott stated it's running its production facilities at full capacity 24/7 and is "manufacturing more than we ever have." "We encourage families to purchase only what they need to ensure that all families are able to access these critical products to feed their babies," said a company spokesperson.

That may be, but parents of young infants for whom formula is the only source of their current nutritional needs don't have the option to wait for supply chain gaps to get filled in.

Nguyen's twins will need their specialized formula for a few more months. Formula accounts for 90% of their current diet.

She has been able to get formula samples from her pediatrician's office and estimates she has a couple weeks worth of formula in reserve.

"Vendors need to communicate clearly to stores about when they are shipping formula, what day and month," Nguyen said. "Retailers have to do better to communicate this with families."