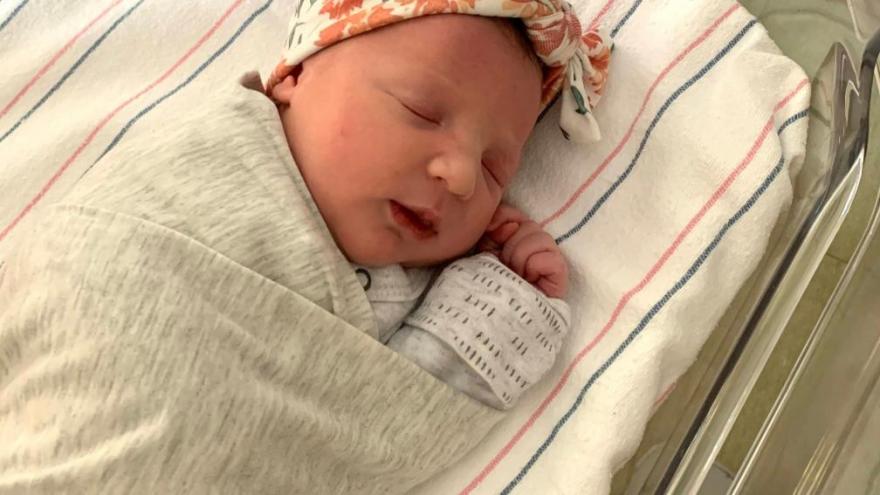 Molly Everette Gibson, seen adorably sleeping, has set what's thought to be a record. The embryo from which she was born was frozen for 27 years.

(CNN) -- Though Molly Gibson is just over one month old, she could've been born at any point in the last 27 years.

Her embryo was frozen in October 1992 and stayed frozen until earlier this year in February, when Tina and Ben Gibson of Tennessee adopted her embryo. Tina gave birth to Molly in late October -- nearly 27 years after her embryo was first frozen.

Molly's birth is believed to have set a new record -- one previously held by her older sister, Emma -- for the longest-frozen embryo known to have to resulted in a birth. Not that records matter to the Gibsons.

"With Emma, we were just so smitten to have a baby," Tina Gibson told CNN on Tuesday. "With Molly, we're the same way. It's just kind of funny -- here we go again with another world record."

Gibson became pregnant with both Emma and Molly with the help of the National Embryo Donation Center, a faith-based nonprofit in Knoxville that stores frozen embryos in vitro fertilization patients have decided not to use. Families can adopt those unused embryos, which are then transferred to an adoptive parent's uterus.

Emma, the Gibsons' older daughter, was born in November 2017 and set the previous record for the longest-frozen embryo known to have resulted in a birth, according to the center. Hers was frozen for 24 years.

Before Emma and then Molly set records, little was known about the viability of older embryos. And when she found out Emma's embryo had been frozen for so long, Gibson worried the age would lessen her chances of becoming pregnant.

But Dr. Jeffrey Keenan, the center's president and medical director, assured her that age likely wouldn't affect the outcome. He said in a release both Emma and Molly's births are proof that embryos shouldn't be discarded because they're "old."

"This definitely reflects on the technology used all those years ago and its ability to preserve the embryos for future use under an indefinite time frame," said Carol Sommerfelt, the center's lab director and embryologist, in a release.

About 75% of all donated embryos survive the thawing and transfer process, and between 25 to 30% of all implants are successful, Sommerfelt told CNN in 2017 when Emma was born.

Questions still remain about the difference age makes in an embryo's successful birth, but the center says that the Gibson girls' births are both positive examples of using older embryos.

Molly's birth was a bright spot during the pandemic

The second embryo the Gibsons adopted wasn't thawed and transferred to Gibson's uterus until February. Gibson said she found out she was pregnant with Molly just days before Covid-19 was declared a pandemic.

Born at the end of October at 6 pounds, 13 ounces, Molly lit up her family's world. And though she and her sister are medical marvels, Gibson said the thing that still surprises her the most is the fact that they're both hers.

Gibson told CNN in 2017, upon Emma's birth, that she and her husband had struggled with infertility. The couple had their hearts set on traditional adoption, but after her parents suggested checking out embryo adoption, their path changed in unexpected ways.

"You would think that throughout pregnancy that I would just be used to it, but I'm still completely blown away that they are ours," she said.

Correction: An earlier version of this story listed the wrong first name for the president of the National Embryo Donation Center. He is Dr. Jeffrey Keenan.