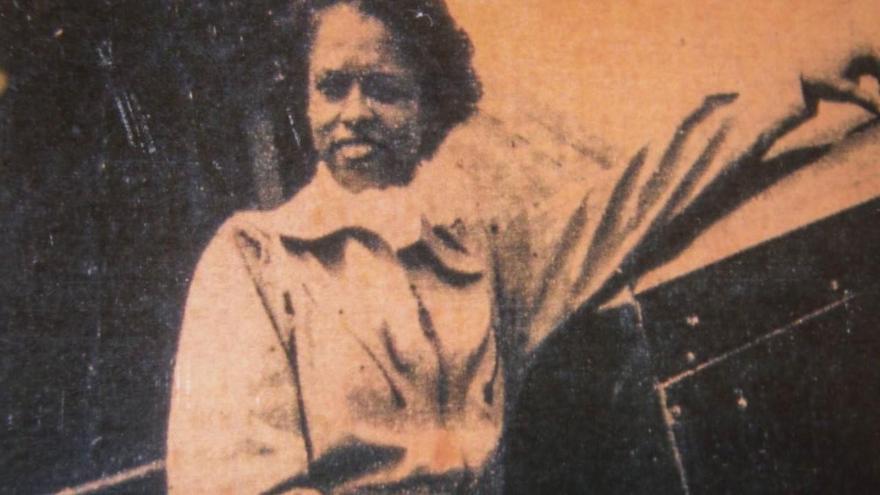 (CNN) -- Azellia White, one of the nation's first African American female pilots, earned her pilot's license just after World War II and found freedom flying in the skies above the Jim Crow South.

"She says you just felt free up there, just free. There weren't any racial barriers or things like that when you're in the skies," her great-niece, Emeldia Bailey, told CNN affiliate KTRK.

White died of "natural causes" September 14, Bailey told CNN. She was 106. Her funeral was held September 21, and she was buried in a cemetery just outside Houston.

Though White is regarded as racial pioneer, she flew in the contrails of other African American women who took to the skies.

She was born in June 1913 in Gonzales, Texas, about 75 miles east of San Antonio, and would have been a little girl when America's first black female pilot, Bessie Coleman, earned her wings in 1921, according to the National Women's History Museum.

But in that time of racial prejudice, Coleman had needed to earn her license from France's Fédération Aéronautique Internationale before touring America and Europe giving flight lessons.

White married in 1936 and five years later moved with her husband, Hulon "Pappy" White, to Tuskeegee, Alabama, where he would work as an airplane mechanic, according to the Lone Star Flight Museum in Houston.

First lady Eleanor Roosevelt visited Tuskegee in 1941 and an instructor for the famed Tuskegee Airmen training there took her up in the air in a plane for an hour.

"Mrs. Roosevelt helped us," White told KTRK last year. "She said, 'I'm going back and tell them to let those black guys fly,' and she did it, and we took over."

She helped start a flight school

After World War II, White and her husband, along with two other Tuskegee Airmen, created the Sky Ranch Flying Service, which was a flight school, delivery service and airport with a mission to serve the black community during segregation.

White earned her pilot's license in 1946 and flew with Tuskegee Airmen who had come home from the war, according to the Lone Star Flight Museum.

Bailey, her great-niece, told CNN she grew up not far from White and "saw her almost every day."

At family gatherings, White regaled relatives with tales of her aerial adventures. "We would sit and listen to all her stories, about places where she'd flown," Bailey said.

Though she herself never got a chance to fly her great-aunt, Bailey recalled White flying her mother from Tuskegee to Birmingham on shopping trips.

In 2018, White was inducted into the Organization of Black Aerospace Professionals Hall of Fame and Texas Aviation Hall of Fame according to the Lone Star Flight Museum.

Following her inductions, White summed up her journey to KTRK: "I just had a good time in life."