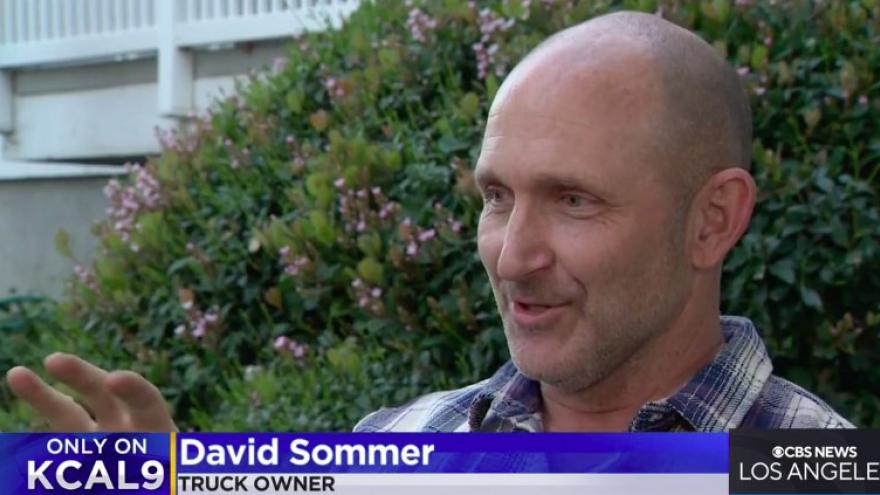 NORTH HOLLYWOOD, Callifornia (KCAL/KCBS) -- Authorities across Los Angeles County are warning the public to be more aware of where they park their car overnight, as the rate of catalytic converter thefts have skyrocketed in recent months.

Though Los Angeles Police Department officials didn’t have exact numbers, they were confident that the number of crimes centering around stolen car parts — with an emphasis on catalytic converters — have jumped in a drastic manner.

David Sommer was sleeping Thursday evening when his home alarm system and motion-sensor outdoor light alerted him that someone or something was in his front yard.

Upon further investigation, he saw three individuals surrounding his work truck. He immediately confronted them asking, “You stealing my cat?!”

Security camera footage from Sommer’s front yard shows one man idling by his work truck before two more pull up in another vehicle. One of the men, wielding what appeared to be an electric drill of some sort, can be seen crawling under the vehicle just before they were confronted.

“I started screaming at these guys, ‘What the hell are you doing? You trying to steal my catalytic converter?’ And they just jumped in the truck and they took off,” Sommers recounted.

They weren’t taking his pet though, but rather his catalytic converter.

This attempt was just one in an insane number of recent thefts that have plagued Los Angeles County, an unfortunate incident that many residents don’t realize until they get in their car in the morning to head to work or take the kids to school.

Authorities disclosed that catalytic converter thefts are indeed on the rise, due to the valuable metals that the car part is made out of — both Palladium and Rhodium, which go for a pretty penny if sold to the right scrapper.

“The police informed me that when you have a diesel truck, it has a bigger catalytic converter. Therefore, there’s more of this precious metal,” Sommers continued.

He went to file a police report the next morning, but since he was able to stop the thieves before they actually made off with anything, there was nothing they could do.

“It’s frustrating,” Sommers said. “To see people trying to just take your stuff when you work hard for it.”

Especially when that stuff they’re trying to take is normally upwards of $3,000 to replace.

Since the authorities are left with their hands tied behind their backs, Sommers joins a list of other Angelenos who are sharing their like security footage and stories to help raise awareness about this latest crime trend.

Officers recommended that if you do need to park your vehicle on the street, they recommending finding a very well-lit area, and parking as close to the curb as possible to make it more difficult for someone to crawl underneath. They also made it clear that security devices are available for purchase, including cages you can place around the catalytic converter to prevent its theft.