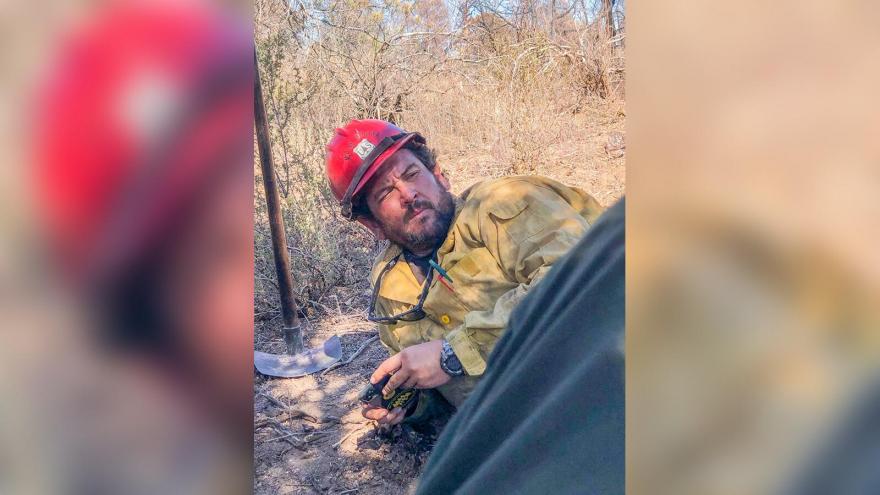 Charles Morton, a Big Bear Interagency Hotshot Squad Boss, was battling the El Dorado Fire Thursday when he was killed, the US Forest Service announced in a press release.

(CNN) -- A firefighter killed while battling a wildfire that was sparked by a gender reveal party has been identified by authorities.

Charles Morton, a Big Bear Interagency Hotshot Squad Boss, was battling the El Dorado Fire Thursday when he was killed, the US Forest Service announced in a press release Monday.

The blaze -- one of at least 27 fires in California -- continues to burn in San Bernardino County and has charred 22,588 acres since it started on September 5. It is now 60% contained, according to Cal Fire. Evacuation orders remain in place for several areas as dry, hot conditions continue.

The 39-year-old firefighter "died while engaged in fire suppression operations," the US Forest Service said.

Hotshots are the firefighters on the frontlines who walk directly into dangerous fire on steep terrain to strategically plan the best course of action to tackle the flames.

"Charlie was a well-respected leader who was always there for his squad and his crew at the toughest times," US Forest Service Chief Vicki Christiansen said in a press release.

"Our hearts go out to Charlie's loved ones, coworkers, friends and the Big Bear Hotshots. We will keep them in our thoughts and prayers," she added.

Morton had been working as a firefighter for the last 18 years, including 14 years with the Forest Service, according to the release.

He is survived by his wife and daughter, his parents, two brothers and cousins, the press release said.

"He's loved and will be missed," Morton's family said in the press release. "May he rest easy in heaven with his baby boy."