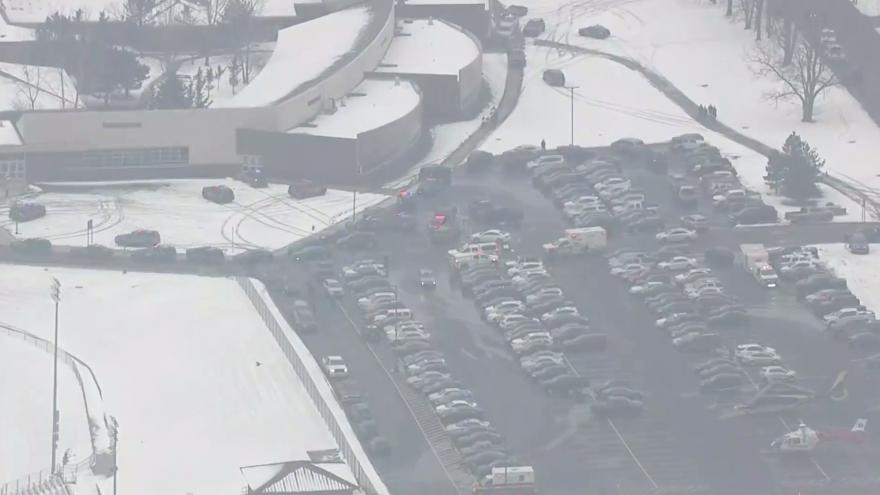 (CNN) -- A 15-year-old boy is in custody after three students died and eight were injured in a shooting Tuesday afternoon at a high school in Oxford, Michigan, authorities said.

Eight others were shot, one of whom is believed to be a teacher, McCabe said. Of the eight injured, two are currently in surgery and the other six are in stable condition with various gunshot wounds, McCabe said.

LIVE UPDATES ON THE SHOOTING

"I think this is every parent's worst nightmare," said Gov. Gretchen Whitmer, who added that shootings at schools are "a uniquely American problem that we need to address."

"My heart goes out to the families. This is an unimaginable tragedy. I hope we can all rise to the occasion and wrap our arms around the families, the affected children and school personnel and this community," Whitmer said.

The suspect, a sophomore at the school, was taken into custody without incident five minutes after authorities responded to the shooting, McCabe said. His parents have hired an attorney and have not permitted him to talk to police, McCabe said.

McCabe said calls for an active shooter came in around 12:51 p.m. ET. Oxford is about 45 miles north of Detroit.

The deputy who is assigned to Oxford High School and another deputy took the suspect into custody, McCabe said.

"At this point in time, we believe he acted alone," McCabe said. He said that authorities are aware of how the suspect allegedly got the gun into the school, but declined to divulge those details.

All evacuated students were relocated to a nearby store for reunification with relatives. About 25 agencies and close to 60 ambulances responded, according to John Lyman, public information officer for the Rochester Hills Fire Department.

The families of the victims have been notified. It is not currently known whether the three students killed were targeted, McCabe said.

"We've done three sweeps of the high school to make sure there's no other victims," he said. "We don't have a motive at this point in time. We are still investigating that."

A search warrant has been executed at the suspect's home, McCabe said.

McCabe said the suspect could be charged as an adult, but that is up to the Oakland County Prosecutor's Office. Prosecutor Karen D. McDonald said in a statement Tuesday her office has "begun the process of receiving information regarding the investigation" into the shooting.

"I was both horrified and saddened to learn about the shootings at Oxford High School this afternoon. My office and I have been in constant communication with the Sheriff's Office, the Oakland County Juvenile Court and other governmental and law enforcement bodies," McDonald said. "It is our intent to review it thoroughly and issue appropriate charges quickly."

"Oxford High School students and staff are systematically being evacuated to the Meijer Garden Center and may be picked up there. Any students with their own transportation have been allowed to leave. All other district schools are in lockdown for safety purposes and are in no danger," read the statement, obtained by CNN affiliate WDIV.

Superintendent Tim Throne said at the news conference the shooting left him shocked. "It's devastating," he said.

Throne declined to say why there were no metal detectors in the school, but did say that to his knowledge, metal detectors never came up in conversation prior to the shooting.

Aiden Page, a senior at Oxford High School, told CNN's Anderson Cooper on Tuesday the shooter was so close to his classroom that a bullet pierced one of the desks Page and other students used to barricade the door.

Page said everything kicked into high gear when he, other students and his teachers heard two gunshots.

"We heard two gunshots and after that, my teacher ran into the room, locked it, we barricaded and then we covered the windows and hid," he said.

The class was on lockdown for an hour, Page said. During that time, some students armed themselves with whatever they could find.

Page said the entire experience was "insane" and he contemplated whether he would live through the ordeal.

"The very first thing in my head was, 'Is this actually happening? I'm going to text my family, say I love them just in case, if I were to die.' Then when everything calmed down for a second, I was able to catch my breath and rationalize things," he said.

"It's definitely going to be weird coming back, especially knowing people were injured and a couple of students died as well."

President Joe Biden addressed the shooting Tuesday while in Minnesota, saying, "My heart goes out to the families enduring the unimaginable grief of losing a loved one."

"You've gotta know that that whole community has to be in a state of shock right now," Biden said.

Michigan Attorney General Dana Nessel said her department has offered assistance to local law enforcement and that she extended her "sincere gratitude" to the first responders on the scene.

"My heart goes out to the parents who have lost their children and to the students, teachers, staff, and families reeling from the tragedy of a school shooting within their community," Nessel said. "We must act to properly address gun violence in our schools and the ongoing threat of another unconscionable tragedy if we continue to only offer thoughts and prayers. Our kids deserve better."

The professional sports teams of Detroit -- including the Tigers, Red Wings, Pistons and Lions -- released statements about the shooting.

"We share in the heartbreak felt by all of those impacted by today's tragic events in Oxford," the Detroit Lions tweeted. "We as an organization extend our prayers to the victims and offer support to the entire Oxford community during this painful time."