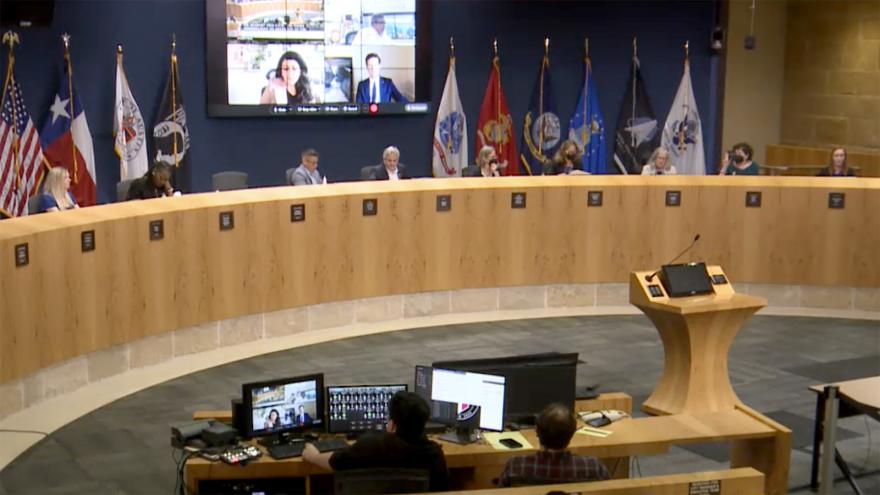 (CNN) -- The city council in Texas' capital approved a resolution to explore raising the age for purchasing AR-15-style rifles and other semi-automatic weapons from 18 to 21 during a meeting Thursday.

The resolution directs Austin City Manager Spencer Cronk to "explore every option" to would allow the city to restrict the sale of such guns to people under the age of 21, despite a Texas statute prohibiting local governments from setting their own restrictive gun measures.

Local municipalities in Texas lack the authority to regulate the sale, ownership, transfer and registration of firearms and ammunition, according to Texas' local government code.

The action comes during a national debate about gun laws following mass shootings at an elementary school in Uvalde, Texas and a New York supermarket. In those shootings, each teenage suspect allegedly used a legally purchased AR-15-style rifle.

A bipartisan group of US senators has announced an agreement in principle for gun safety legislation to address mental health resources, school safety and access to firearms. The framework includes a more thorough review process for people between ages 18 and 21 who go to buy a gun like an AR-15, but it would not call for raising the age requirement to purchase such rifles.

Texas Gov. Greg Abbott, a Republican, has said there is a mental health problem which leads to gun violence, not an issue with firearms. At a news conference after the Uvalde shooting he said, "People who think maybe we can implement tough gun laws, and we can solve it; Chicago, New York and LA disprove that thesis."

Cronk, who recommends policies and programs to the Austin City Council, must return his findings about the city's gun restriction options by July 26, the resolution states. His office will conduct a "legal analysis" in conjunction with Austin's law department division to address the concerns about disagreement between the resolution and Texas law, Cronk spokesperson Andy Tate said.

Lee Crawford, the chief of Austin's legal department division, said at the meeting a business owner could sue the city by arguing state law would preempt city law, including after receiving a misdemeanor citation for their gun sales in Austin. Identifying the legal grounds to sue the city over the proposed gun restrictions would be "speculative," because the proposals have yet to become law, he said.

Kelly said the legislation could jeopardize the council's resources and encouraged other council members to advocate for gun law changes at the state or federal level instead of greenlighting city-level restrictions which would break Texas law.

"I believe that any attempt by Austin to restrict, regulate or hamper the sales of firearms does violate state preemption laws and that violation of the present preemption law risks a lawsuit from the attorney general, which I think is a needless waste of taxpayer resources," she said at the meeting.

Kelly's opposition was met with swift rebuke from other council members, including council member Alison Alter, who sponsored the resolution.

"Nobody should have to worry about an 18-year-old walking into a school with an AR-15 and shooting up the school, and that is not a far-fetched scenario," she said.

Austin gun shop owner Joseph McBride said his business only sells firearms to customers who are 21 years and older. But he said federal and state lawmakers should set regulations on firearms instead of local governments.

"We're going to have a hodgepodge of, God knows if you're going to be OK to carry one or to have one in certain cities in the state ... and that's just not the right way to go," he said.

The legal age to purchase a handgun in Austin is already 21, according to Texas law.

Lawmakers in at least one state, New York, recently have passed a bill raising the minimum age to 21 to buy a semi-automatic rifle. Gov. Kathy Hochul signed the measure, which was part of a 10-bill gun control package, earlier this month. Six other states require a minimum age of 21 to purchase long guns like the AR-15.

One of those states is Florida. Not long after the massacre in Parkland in 2018, the state raised the legal age to buy rifles and shotguns to 21. The National Rifle Association has sued the state over the change in the law, called the Marjory Stoneman Douglas High School Public Safety Act.