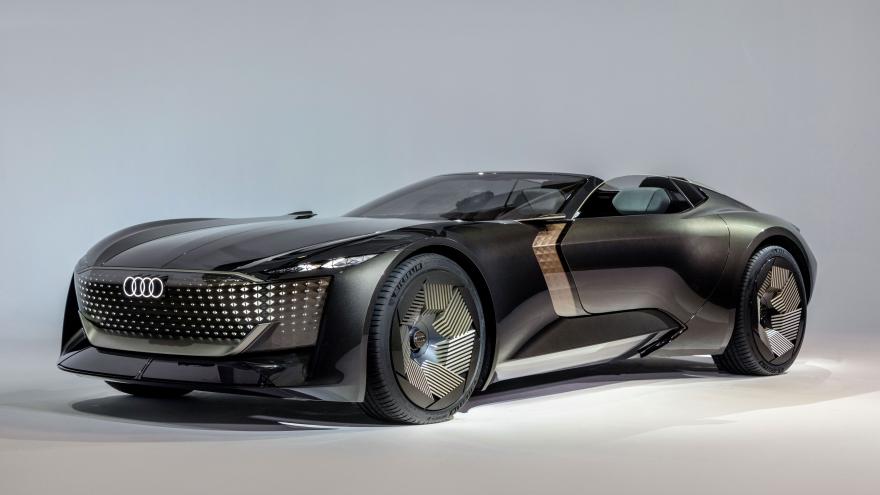 (CNN) -- Audi's latest concept car, the Skysphere, will be able to drive itself, the company claims. But the real hook is that, as it changes from human driving to self-driving, the body of the Skysphere expands by 10 inches from end-to-end.

The concept car's long hood extends forward and the steering wheel and pedals fold away. The driver's side of the dashboard, really a glass display panel, and the gear selector also pull away, creating a more comfortable space for the driver to relax.

All this is possible because the Skysphere is an electric car powered by a motor that's mounted behind the seats. That means there's not much under the hood to get in the way as the front end moves forward andbackward.

In its self-driving mode, the Skysphere acts like a touring car, an elegant two seater designed for fast comfortable long distance travel. A longer wheelbase -- the distance between the front and back wheels -- is good forroad trips because it can give the car a more stable feel on the highway. And without a steering wheel or pedals, the driver can stretch out, relax and enjoy the scenery.

In regular human driving mode, it's more like a sports car. The much shorter wheelbase can give the car a quicker, more responsivedriving feel. The car also lowers on its suspension almost a half inch closer to the ground. When put in its sports car mode, a steering wheel unfolds from underneath the dashboard and a set of pedals moves into position in the driver's footwell.

This shape-shifting is Audi's attempt to answer a conundrum facing automotive designers. Their advocates say self-driving vehicles can, theoretically, be safer than human drivers, and offer opportunities to rethink what a car can and should be. But among the challenges they face is consumer adoption from people who actually enjoy driving. And Audi, which boasts about the power and performance of its cars, considers those people to be among its core customers. So this car offers them a comforting compromise.

"We are still convinced driving is a beautiful experience and we will provide it also in the future," said Henrik Wenders, head of the Audi brand, during a presentation for journalists.

The Skysphere has no actual grille, since electric cars don'trequire nearly as much cooling as a gasoline-powered car. Instead, a grille-shaped aluminum screen under a clear cover displays light effects that punctuate changes from one driving mode to another.

Specially designed accessories accentuate the car's different roles. A pair of blankets are rolled up behind the driver's seat, ready to be used if the occupants would like to nap while the Skysphere drives itself. When the steering wheel extends, it also reveals a storage compartment behind the steering wheel holding a pair of leather driving gloves.

Since this is just a concept car, the Skysphere cannot actually drive itself, Audi executives said. It's just an idea of how a car like this could potentially be used. It's also not clear whether a length-changing car could be made to pass crash safety tests, they said.

With its long hood and the rearward opening doors, the Skysphere is loosely modeled on the Horch 853 roadster of the 1930s. Founded in 1904, Horch was Audi founder August Horch's first car company. He founded Audi in 1909 after being forced to leave Horch. (Audi is a Latin translation of Horch's name which means "listen" in German.)

Both companies later became part of Auto Union, which was formed in 1932 from the merger of four different German automakers. Of those four, Audi is the only one that survives and it still uses Auto Union's logo, four interlinked rings.Today, Audi is part of the Volkswagen Group, which also still owns the Horch brand name.