Auction bids are topping $57,000 for a rare $20 banknote with Del Monte sticker on it 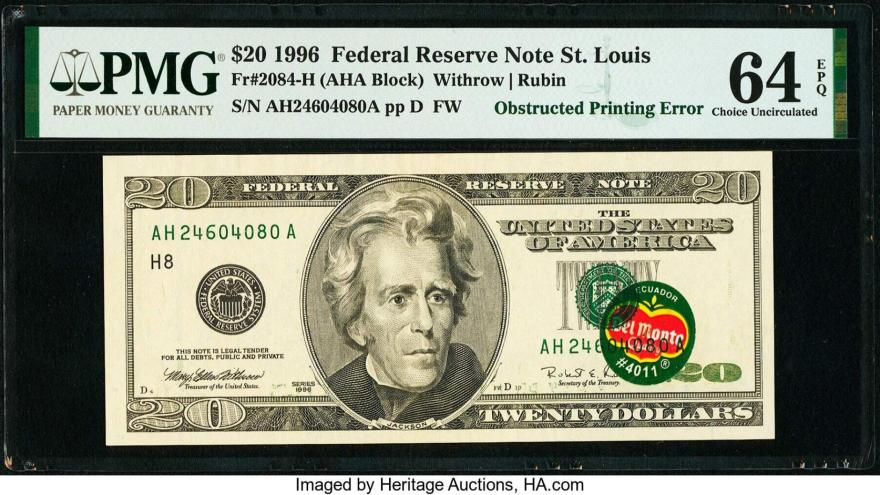 The "Del Monte note," a rare $20 banknote with a banana sticker on it, is currently for sale through Heritage Auctions, a Dallas-based auction house. Currency collectors are paying close attention and breaking previous bidding records with their offers, according to Heritage Auctions.

"The note has been viewed on our website over 4,300 times," Dustin Johnston told CNN. He's the vice president and managing director of the currency department with Heritage Auctions.

The banknote, from the 1996 series, is unique because of the sticker, which found its way onto it between stages of the printing process, and has part of the Treasury seal and the note's serial number printed over it.

The auction will wrap up on January 22. On that day, the note will be offered among other items during a live event that starts at 6 p.m. Central Time and will be streamed on Heritage Auctions' website.

This type of printing error on currency is referred to as an "obstruction."

"Most 'obstructed error' notes result from a loose piece of paper, scotch tape, band-aid, or other detritus becoming attached to the currency stock during the printing process and later falling off. Most notes of this class thus exhibit a blank area somewhere on the note," said Leonard Augsburger, the project coordinator of the Newman Numismatic Portal at Washington University in St. Louis.

He said most banknotes featuring obstructions will sell for between $100 to $1000.

According to Heritage Auctions, the note, printed at the Fort Worth Western Currency Facility, first surfaced in 2003 when a college student in Ohio listed it for sale on eBay. He'd gotten it from an ATM.

"A lot of errors that come through and come out of the ATM are very hard to notice," Johnston told CNN.

"This is one of those really incredible errors that is immediately obvious. It's tactile, so if you're pulling [money] out and you're just counting it, you're probably gonna feel just the increased height of the sticker. And then of course the color just jumps out at you," Johnston added.

Johnston told CNN that the note is so important that, for both auctions, he flew to pick it up in person and bring it back to the auction house.

How the sticker made its way onto the note is mysterious, but it's possible the action was deliberate.

The printing of federal currency happens in three stages: the back first, then the front, then a third stage when the serial number and federal seal are added.

"By examining the sticker and the overprint, it is clear that the sticker was applied after the front was printed and before the serial number and seal were applied," Augsburger said.

"The placement of the sticker is intriguing -- if it were placed in most areas of the note it would not be possible to prove that it was applied between the second and third stage. This suggests a deliberate placement," he added.

Johnston told CNN the sticker could have been affixed to the note for testing purposes.

"Over the last 20 to 30 years, the Bureau of Engraving and Printing has started using optical recognition to review the notes as they come off the printing press. Previously people did that," Johnston explained.

"It's very possible that sometimes they'd do things like this purposely, to test their procedures, and maybe this still got out."

With the increased use of digital tools to weed out errors, retained obstructions on banknotes are rarely found. Johnston's says it's a one-in-a-million chance.

"This is maybe one of the last really great retained obstructions that we'll see," he said.

Johnston also thinks it's possible the sticker was placed on the note as a joke.

"For a sticker to make it onto the printing floor, and get stuck to something else, and make it so cleanly on to the note... you'd almost have to suspect it was done on purpose, you know, a prank or practical joke, whatever it may be."

The item has attracted the attention of so many collectors, monitoring the current auction on the site. What makes it so special?

"We're always attracted to things that go wrong. This is one of those things that -- not only did it go wrong, it's visually fantastic. And it's fun on top of it," Johnston said.