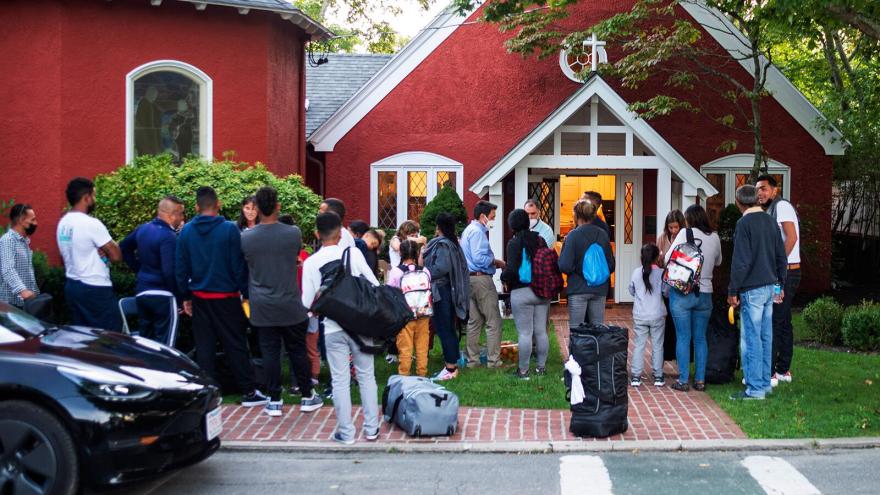 Migrants gather with their belongings outside St. Andrews Episcopal Church on September 14, 2022, in Edgartown, Massachusetts, on Martha's Vineyard.

(CNN) -- Attorneys representing more than 30 of the migrants flown to Massachusetts this week asked the US Attorney for Massachusetts and the state's attorney general to open criminal investigations into the flights.

DeSantis sent two planes carrying migrants to Martha's Vineyard earlier this week, in a move that infuriated Democratic politicians and underscored ongoing efforts by Republican governors to transport migrants to northern liberal enclaves to protest what they say are inadequate federal efforts on southern border security.

Located off the coast of Massachusetts and long known as a posh summer destination for wealthy vacationers, Martha's Vineyard provided an unusual and unexpected place for the migrants to be sent.

James Hagerty, the Edgartown town administrator, told CNN on Thursday that officials believe all of the migrants originated in Venezuela. A local fire chief said earlier in the day that the migrants included seven families, with four children ranging from 3 to 8 years old.

Community members from the island quickly rallied to help the migrants by donating food and clothing. Additionally, residents and others from different parts of the country raised more than $175,000 after the migrants' arrival, according to Beth Folcarelli, CEO of the nonprofit Martha's Vineyard Community Services.

The migrants' attorneys said that their clients were not aware that they were being taken to Martha's Vineyard specifically.

They were induced to board the planes with "representations of work assistance and immigration relief in Boston," the attorneys said in a news release.

US Attorney for Massachusetts Rachael Rollins told reporters Thursday she would be speaking with members of the Department of Justice about DeSantis' actions, saying she did not yet have enough information to say whether he broke any laws in sending the migrants to Martha's Vineyard. She added that their first priority is making sure the people who arrived were treated respectfully.

A spokeswoman for Rollins' office in Massachusetts told CNN on Saturday they did not have any further comment.

Chloe Gotsis, a spokeswoman for the Massachusetts Attorney General's Office, told CNN on Saturday that the office is working to "review all information relevant."

"We are in touch with our federal and state partners, along with attorneys representing the migrants, as we gather facts and evaluate all legal options," Gotsis said.

CNN previously reported that the migrants were taken to a military base Friday morning to receive shelter and humanitarian support, according to officials.

DeSantis has vowed to continue his efforts in relocating migrants.

"These are just the beginning efforts," the Florida governor said. "We've got an infrastructure in place now. There's going to be a lot more that's happening."