Attacks against people of Asian descent are on the rise in NYC. The city is pushing to combat it. 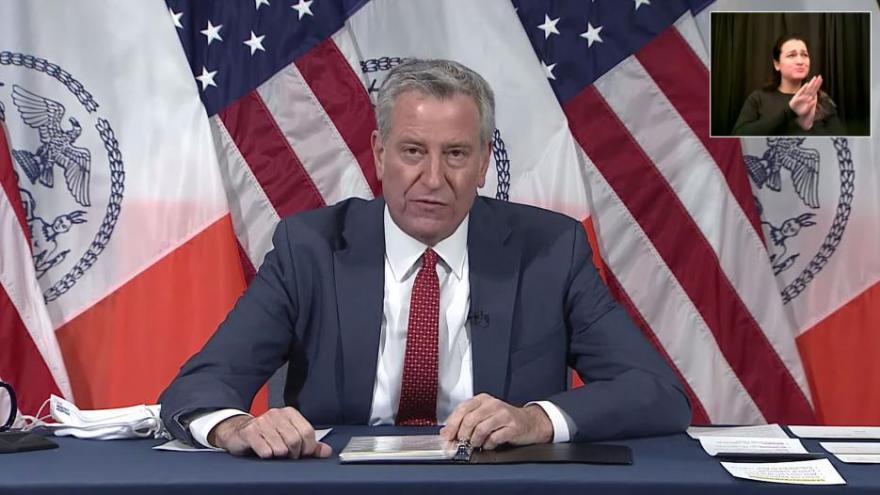 (CNN) -- The stabbing of a 36-year-old man on Thursday is the latest in a number of attacks in New York City against people of Asian descent, a surge that has sparked a call for action from advocacy groups.

Mayor Bill de Blasio said Tuesday that the city's Office for Preventing Hate Crimes and other agencies are meeting with Asian community leaders to discuss the recent incidents.

The city has also launched a new webpage -- "NYC.Gov/StopAsianHate" -- through which people may report bias incidents or hate crimes. The new webpage has fostered a social media campaign using the hashtag #StopAsianHate.

Earlier this month, video footage of a man shoving a 52-year-old Asian woman into a metal newspaper box in Queens went viral, and advocates highlighted the February 16 incident in the context of a rise in anti-Asian attacks.

A 47-year-old man has been charged with assault and harassment in connection with the incident, according to a criminal complaint, during which the woman sustained a laceration to her face and lost consciousness. Prosecutors, however, have not brought hate crime charges. While the NYPD's Asian Hate Crimes Task Force investigated the incident, the altercation appeared to have been related to social distancing, according to NYPD.

Even incidents with no hate crime charges like the one in Queens have caused authorities and advocates for the Asian community to speak out, as they say hate and violence against Asians has been brewing for several months -- and needs to be addressed.

This week, Congresswoman Grace Meng, who represents Queens, said "since the beginning of this pandemic our Asian American community has been suffering and fighting basically two viruses." She adds that "we have already seen our members and small businesses fight the pandemic of Anti-Asian hatred."

Actress Olivia Munn, appearing on CNN last week, said "Within the Asian American community, we don't tend to report a lot of these things. We usually take it on the chin and keep going."

"People care" she told CNN, after having tweeted about the assault in Queens to draw attention to it. "When you ask them to see what our suffering is doing to us, they do step up and stand up for us."

The NYPD had investigated at least four potential hate crimes in the last week, according to Deputy Inspector Stewart Loo, head of the NYPD Asian Hate Crime Task Force. He attributed the spike in 2020 to greater willingness among the younger generation of Asian Americans to report attacks.

"This is not a problem that's new. This should have been reported many years ago," Loo told CNN, referencing the recent coverage of attacks against Asian Americans.

Loo said that he sees children of older people victimized in attacks encouraging their parents to come forward and report crimes against them.

The investigation into the February 16 attack is ongoing, according to the Queens District Attorney's Office, and said they would welcome anyone who may have additional information to contact their office's Hate Crimes Bureau.

"Queens residents should be vigilant in reporting and speaking out against any acts of hate. The District Attorney is committed to making sure everyone in Queens -- the most diverse county in the nation -- is safe regardless of race, religion, ethnicity or who they love," a spokeswoman for the office said Friday.