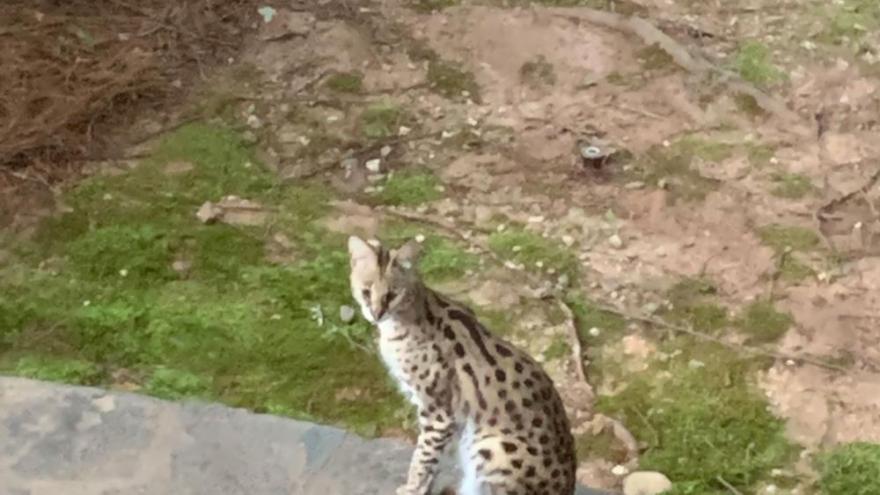 The woman took this photo of the serval after it ran out of her house.

(CNN) -- An Atlanta woman woke up to a surprise when a cat -- that was not hers -- jumped onto her bed Wednesday morning.

She was even more shocked to discover the cat was a serval -- an exotic cat native to Africa.

Kristine Frank, who lives in the Brookhaven neighborhood, told CNN that the cat came in the house shortly after her husband took their dog outside, leaving a door open.

The cat was just 6 inches from her face, Frank said. She scared it off the bed.

"I said, 'That's not a normal house cat. I don't know what that is, but I am terrified right now,'" she said.

Frank said she slowly got out of the room and her husband opened a bedroom door that led outside, allowing the cat to leave the house.

"Afterwards I was like, 'Was that a bobcat? Was it a leopard? Was it a baby? Was it a mom?'" Frank said.

She called animal control, which told her to contact the Department of Natural Resources, which is now investigating.

"It still kind of terrifies me because that cat is illegal and there's a reason it's illegal. So I really don't know what it's capable of doing."

The cat is still on the loose. Frank thinks the serval, which she estimated to be about 2-and-a-half feet tall, is someone's pet.

Owning a wild cat is illegal in Georgia, but there are no federal laws against it, according to the Animal Legal Defense Fund.

"Wild cats are not meant for private possession," Prygoski said. "The wild cat trade in this country is really not well regulated, which results in many species of wild cats, including servals, living out their lives in private homes which are not adequate environments for the natural behaviors that they exhibit."

The DNR has been working to set up traps in Frank's neighborhood, Prygoski said.

"When law enforcement is hopefully able to trap her we hope that she is then set to an accredited sanctuary where she can live out the rest of her life in an appropriate habitat," Prygoski said.

Prygoski says anyone who sees the serval should stay away from the cat and contact animal control or the DNR.