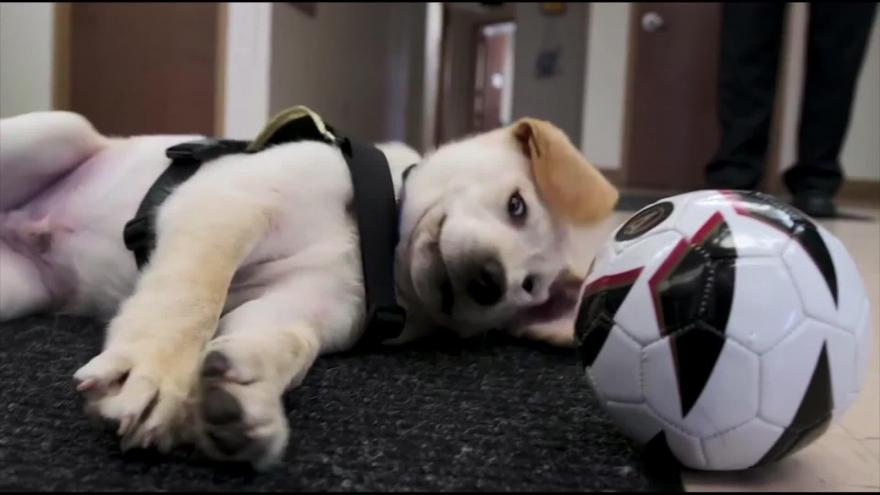 Atlanta United has added Spike, a 12-week-old yellow Labrador retriever, to its roster. He isn't a mascot but a puppy training to be a service dog.

(CNN) -- Atlanta United is making history with its new addition to the team and it's not a new midfielder.

The city's Major League Soccer team has added Spike, a 12-week-old yellow Labrador retriever, to its roster. He isn't a mascot but a puppy training to be a service dog.

"We're really excited to have him as our new star signing. He's from America's VetDogs and we're going to help train him, socialize him, and then he's going to be, you know, of great use to a veteran," Darren Eales, president of Atlanta United, told CNN.

Spike is the first service dog to represent a Major League Soccer club. It's a partnership that John Miller, the President and CEO of America's VetDogs, says just makes sense.

"He'll be socialized, we call it, and working with the team and the stadium and all the events, being exposed to as many different atmospheres as possible. Because our veterans that we work with lead very active lives, the more experience they [the dogs] have on the front end, the easier it is to train and the more adaptable they are when they actually get placed with a veteran," Miller said.

Spike will be trained in the Atlanta area for the next 14-16 months. The pooch will be on the pitch on match days and at Atlanta United's community events.

His name stems from the team's ritual before each game, when a local celebrity hammers a golden spike that represents the founding of Atlanta. In 1837, a spike was driven into the ground as the terminus of the new Western & Atlantic Railroad. The settlement that was built up around the railroad became the city of Atlanta.

"We have our ritual with the Golden Spike that we get the celebrities to hit before a game, so Spike with his color was a perfect choice for the name," Eales said.

After his time with the team, Spike will return to the America's VetDogs campus in Smithtown, New York, to further his training with a certified service dog instructor. He'll learn a host of tasks, like how to help open doors, interrupt nightmares, and how to rest on a veteran's lap to provide comfort and piece of mind.

"All of our services are free of charge. It costs us about $50,000 to raise and train and place one dog. And, the partnership with Atlanta United is going to help us raise awareness and raise funding and (Spike) is going to be a star," Miller said.

The first-of-its-kind partnership is something Atlanta United hopes catches on with other Major League Soccer clubs.

"We're hoping it's going to be a trend. Because, you know the idea here is to increase awareness and you know we'll have more trainers out there being able to train these pups so it's something that would be good if other MLS clubs follow," Eales said.