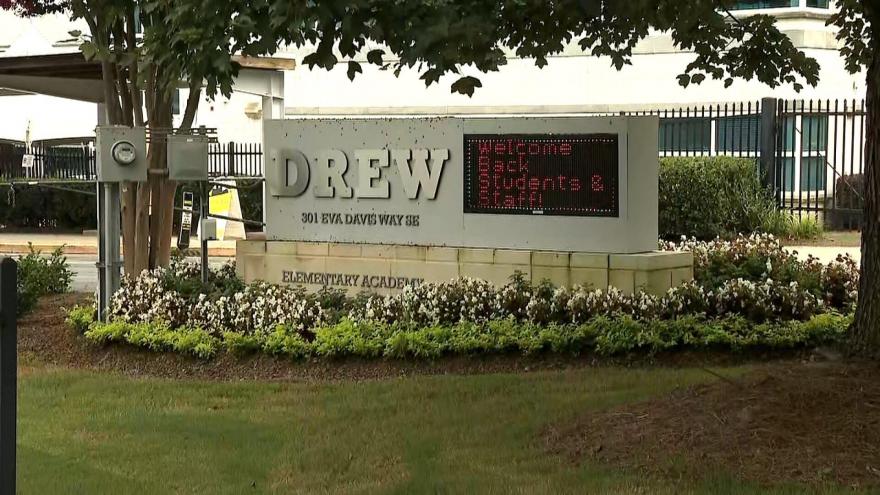 More than 100 students at Atlanta's Drew Charter School have been asked to quarantine after two staff members and a student tested positive for Covid-19.

(CNN) -- More than 100 students at Atlanta's Drew Charter School are in quarantine after nine students and five staff members tested positive for Covid-19, the head of school said Friday.

The school had informed parents in a letter Thursday that two staff members and a student had tested positive. The school said it was "working closely with local public health officials to ensure we follow the proper recommendations to quarantine."

Peter McKnight, Drew's head of school, revised the number of positive cases in a statement Friday afternoon and said discussions about a staff vaccination mandate were underway.

The initial positive tests and the quarantining of more than 100 students, just two days after the start of the school year, were first reported by the Atlanta Journal Constitution.

Five cases were detected before the start of the school year on Tuesday following the testing of about 1,900 students and staff, according to McKnight.

Only one of the five staff members who tested positive had been vaccinated, he said.

Eighth grade classes were being conducted online because of the number of staff from that grade in quarantine, the school said.

A parent whose children attend Drew said he had anticipated positive cases given the recent rise in COVID-19 and the spread of the Delta variant. CNN agreed not to publish his family's surname because of the sensitivity of the situation.

The timing of the positive tests was concerning, said Brandon, the parent.

The parent said he would have preferred if only vaccinated students and staff had been allowed to return to school.

"I figure they shouldn't be in the school if they're not vaccinated," he said. "That's why they should have held off until we got everything under control."

Brandon said his daughter learned at school Friday that classmates had been asked to quarantine. It's unclear if any of Brandon's children at Drew were in close contact with those who tested positive, but he said his children would stay home as a precaution.

He said his daughter is eligible for the vaccine and expects to get the shot soon.

His daughter, who left school to return home on Friday, told CNN she had been excited about the start of in-person learning because online study was challenging.

The girl said she understood that staying home was safer option but the disruption days into the new school year was upsetting.

The first day of school was Tuesday, according to the school website, and "students identified as having close contact with those who tested positive began to quarantine" days later, the AJC reported.

None of the cases appeared to be linked to the campus, according to McKnight, who told AJC the school was still investigating.

School employees were required to be tested prior to the start of the school year, with weekly testing once classes started, according to the school website.

At least six dates were provided for student testing on campus in the days before school began.

The school "strongly encourages" parents to have their students tested weekly, according to the letter.

Three quarters of the staff have received the vaccine and a third of the vaccine-eligible students are vaccinated, a school official told CNN in an email Friday night.

The school is urging eligible students to get vaccinated.

"I am hopeful that we will be able to partner with our families to increase vaccination rates," McKnight told Decaturish.com. He called on officials to "promote vaccination and limit community spread of the virus."

McKnight told AJC, "Vaccinations are hands down our best strategy to protect ... health and safety."

"We also plan to focus on vaccination, mask wearing and social distancing as the most important mitigation strategies," he said.