Autopsy report says Rayshard Brooks was shot twice in the back, lists manner of death as homicide 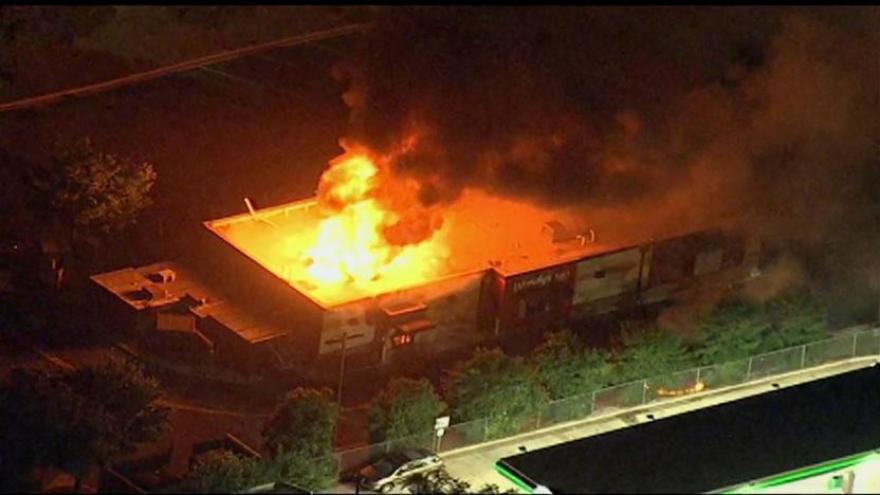 The Wendy's where an unarmed black man was shot and killed Friday was set ablaze the next day. Rayshard Brooks, 27, was shot dead by an officer Friday night at the Wendy's drive-through in the city.

(CNN) -- Rayshard Brooks was shot twice in the back, according to a release by the Fulton County, Georgia, Medical Examiner's Office.

Brooks died from organ damage and blood loss from the two gunshot wounds, according to the office.

The autopsy, performed on Sunday, lists Brooks' cause of death as gunshot wounds to the back. The manner of death is listed as homicide.

Protesters took to the streets of Atlanta -- and elsewhere around the country -- again Sunday. In Atlanta, they gathered at the fast food restaurant where Brooks died Friday. The restaurant was torched by protesters Saturday.

The Fulton County District Attorney criticized the police officers' handling of Brooks' fatal shooting and said that a decision on whether to bring charges could come around Wednesday.

"(Brooks) did not seem to present any kind of threat to anyone, and so the fact that it would escalate to his death just seems unreasonable," DA Paul Howard told CNN's Fredricka Whitfield on Sunday.

"It just seems like this is not the kind of conversation and incident that should have led to someone's death."

Brooks, 27, was shot dead by an officer Friday night at a Wendy's drive-through in the city after police moved to handcuff him for suspected driving under the influence, according to videos from the scene. The videos show that Brooks took an officer's Taser during the attempted arrest and then fired the Taser at the officers as he ran away.

On Saturday, Atlanta Mayor Keisha Lance Bottoms said she did not believe Brooks' death was a justified use of deadly force.

"While there may be debate as to whether this was an appropriate use of deadly force, I firmly believe that there is a distinction between what you can do and what you should do," Bottoms said.

Garrett Rolfe, the officer who killed Brooks, was terminated Saturday, police said, and a second officer involved in the killing, Devin Brosnan, was placed on administrative duty. Rolfe was hired in 2013 and Brosnan has been with the department since 2018, police said.

Howard, the district attorney, said the possible charges could include murder, felony murder or involuntary manslaughter.

"Specifically, (the question is if) Officer Rolfe, whether or not he felt that Mr. Brooks, at the time, presented imminent harm of death or some serious physical injury. Or the alternative is whether or not he fired the shot simply to capture him or some other reason," Howard said. "If that shot was fired for some reason other than to save that officer's life or to prevent injury to him or others, then that shooting is not justified under the law."

An attorney for Brooks' family, L. Chris Stewart, said that officers did not have to shoot Brooks and noted that the Taser is intentionally not a deadly weapon.

"If the officer had been a bit more empathetic and a bit less scared, we probably wouldn't have a dead client," he said.

Brooks' wife told CBS she wants the officers to go to jail.

"That's a very hard thing to charge," Miller told CNN's Ana Cabrera Sunday. "You know, you just look at all the other cases that were a bit clearer and, you know, just as deadly to the client, and they were not charged with murder."

On city leaders taking action, Miller said, "It's good that people are taking steps to mitigate problems, but it is not justice, and we don't really think it can ever be justice because a man's life was taken, children lost a father, and a wife lost a husband."

Brooks has three daughters who are 1, 2 and 8 years old, and he also has a 13-year-old stepson, according to his attorneys. Earlier in the day, Brooks had spent time with his oldest daughter ahead of a planned birthday party on Saturday.

How the fatal shooting unfolded

The incident began when police responded to a call Friday night about a man sleeping in a parked vehicle in the Wendy's drive-through lane, causing other customers to drive around it, the Georgia Bureau of Investigation said in a statement.

When Brosnan arrives to the scene, Brooks is asleep behind the wheel in the drive-through lane, according to his body camera video. Footage from both officers' body cameras and from their vehicles shows them speaking with Brooks for nearly 30 minutes outside the Wendy's.

Brooks says he does not have any weapons on him and the officers pat him down to confirm as much, the videos show. Howard said their interaction was "cordial" and noted that Brooks answered the officers' questions.

After Brooks takes a breathalyzer test, one officer tells him to put his hands behind his back and they move to handcuff him, the videos show.

Brooks then resists the arrest and begins struggling with the officers as they tussle on the ground for about 30 seconds, according to videos from the scene.

During the struggle, Brooks grabs an officer's Taser, escapes their grasp and starts running away from the two, the videos show.

"He's got my f---ing Taser," an officer says, according to the body camera footage.

Surveillance video provided by the GBI shows Brooks running from the officers, and he appears to point the stun gun in their direction before falling to the ground. Brooks was shot and taken to the hospital, where he died, the GBI says. An officer was treated for an injury and released.

The GBI kicked off an investigation into the incident at the request of the Atlanta Police Department, officials said Saturday. Once that investigation is completed, the case will be turned over to prosecutors.

Howard said Brooks' autopsy was performed on Sunday, and investigators are still working to speak with other witnesses and obtain a preliminary report from the Medical Examiner before coming to a decision. In addition, Howard said his office is "still experiencing some difficulty" getting all of the body-camera and dashcam footage from Atlanta Police.

The shooting reignited the anger and frustration undergirding the mass protests over the past few weeks. The Wendy's where the shooting took place was set aflame on Saturday night, and in another part of the city, a major interstate was shut down after protesters marched onto a connector and were met by lined up police vehicles.

"I just want to make enough noise that they investigate the situation," one protester told WSB. A large crowd remained on the streets of southwest Atlanta into early Sunday morning, the news station said, facing off with police.

At least 36 people were arrested during the protests, an Atlanta police spokesman told CNN.

"I was very disturbed with what happened," protester Marquavian Odom told CNN. "This is something that keeps happening over and over again. We've been protesting about George Floyd and I thought there was going to be a change, but there wasn't a change, it was still the same old thing."

"I thought the message was clear, but obviously we're still not heard," Odom said.

Crime Stoppers of Atlanta is offering a $10,000 reward for information leading to the arrest and indictment for those involved in the Wendy's fire.

Correction: An earlier version of this story misspelled the last name of the officer placed on administrative duty. It is Devin Brosnan.