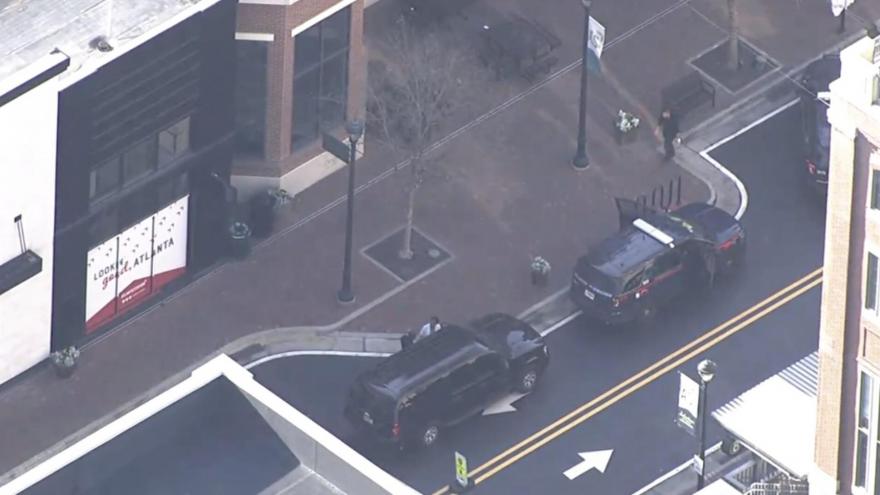 Atlanta police said they detained a man with five guns and body armor at the Publix at Atlantic Station Wednesday.

(CNN) -- A man armed with a rifle entered an Atlanta Publix Supermarket Wednesday in Midtown at Atlantic Station, a commercial and residential area in the city, police said.

A witness saw the man entering "the location openly carrying a rifle and entered the bathroom" and alerted the store management and then notified police, according to a preliminary investigation.

Officers immediately located and detained the man. During the investigation, officers recovered six firearms (two long guns and four pistols) and body armor, according to the Atlanta Police Department.

"When the male exited the bathroom, arriving units immediately detained" him, according to a statement from Atlanta Police Department.

Police identified the suspect as Rico Marley, 22. He has been charged with reckless conduct and will be transported to the Fulton County Jail for further processing.

The firearms, body armor and property recovered during the investigation will be placed into APD evidence.

The incident comes just two days after a gunman killed 10 people at a supermarket in Boulder, Colorado, and just over a week since a shooter killed eight people at spas in the Atlanta area.

Publix in 2019 joined a number of retailers who ask that customers not openly carry guns in their stores in states where open carry is legal.

Atlanta Police say that health officials are conducting a mental health evaluation of the man in custody and that the investigation is still preliminary and continues at this time.

Atlanta police also responded to a call of a suspicious package shortly after Marley's arrest at the same location.

The area has been evacuated and they are investigating. Atlanta police said.

It is unknown if the package is related to the earlier incident at Publix.