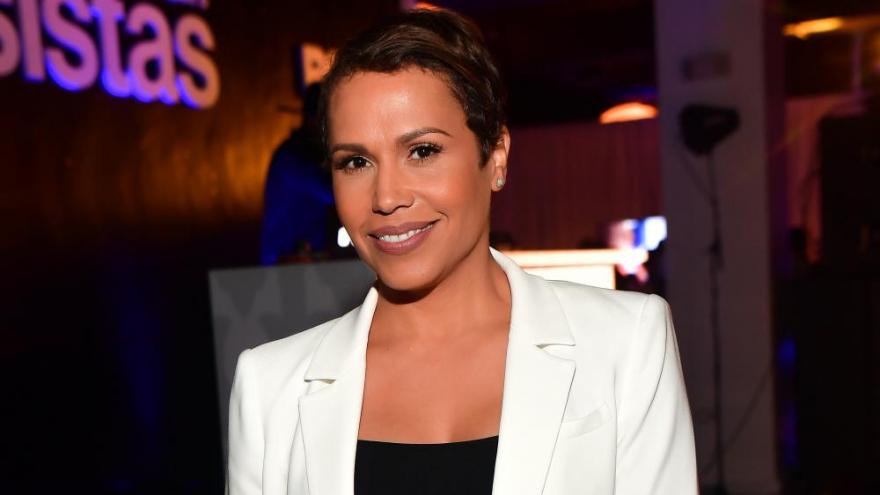 Jovita Moore attends a screening in October 2019 in Atlanta. Moore died on October 28 at 53 after a months-long battle with cancer, WSB announced.

"Jovita died overnight, seven months after being diagnosed with an aggressive form of brain cancer," the station's statement said.

"Back in April doctors discovered two masses on Jovita's brain. After surgery, they diagnosed her with glioblastoma, the most common type of brain cancer," WSB said. There is no cure, said the statement.

Moore had been with Channel 2 Action News since 1998, where she anchored evening newscasts, WSB said. Before moving to Atlanta, the native New Yorker was on the air at WMC-TV in Memphis and KFSM in Fayetteville and Fort Smith, Arkansas, where she started her career, WSB said.

She earned a master of science degree in broadcast journalism from Columbia University Graduate School of Journalism in New York. She had a bachelor of arts degree from Bennington College in Vermont, WSB said.

Moore was known for her contributions to the Atlanta community.

"She donated countless hours to civic associations and non-profit organizations across metro Atlanta. She mentored students and sat on several boards of directors," WSB said.

Atlanta Mayor Keisha Lance Bottoms and her husband are "deeply saddened by the loss of our friend," the mayor said in a statement. "Even those who did not know her personally felt a deep and personal connection to Jovita. She loved Atlanta dearly.

"May her beautiful spirit soar. Jovita will be truly missed."

Moore is survived by her mother and two children.

Tributes poured in on social media following news of her death.

Georgia Gov. Brian Kemp said he was "heartbroken" to learn of her passing.

Moore was a "Georgia icon and world-class journalist," the governor wrote on Twitter, adding she "will live on in the hearts of everyone who welcomed Jovita into their homes countless times to inform them about their community and keep them and their families safe."

"Her professionalism and dedication to her audience made Georgia a better place. It has been a true honor and pleasure knowing and working with her."

Bernice King, the daughter of Martin Luther King Jr. dedicated several posts on Twitter to the news anchor, writing in one post, "I will miss you, Jovita. Rest, sister."

"She was a tremendous blessing to metro Atlanta and the world, but her family was most precious to her. Praying for those closest to her, including her beloved @wsbtv community. A well-lived life," King wrote in another.

Filmmaker Tyler Perry, wrote, "We know you fought with all you had! I will miss your beautiful smile and warm laughter, let alone seeing you in my living room everyday. You will be missed greatly my friend."