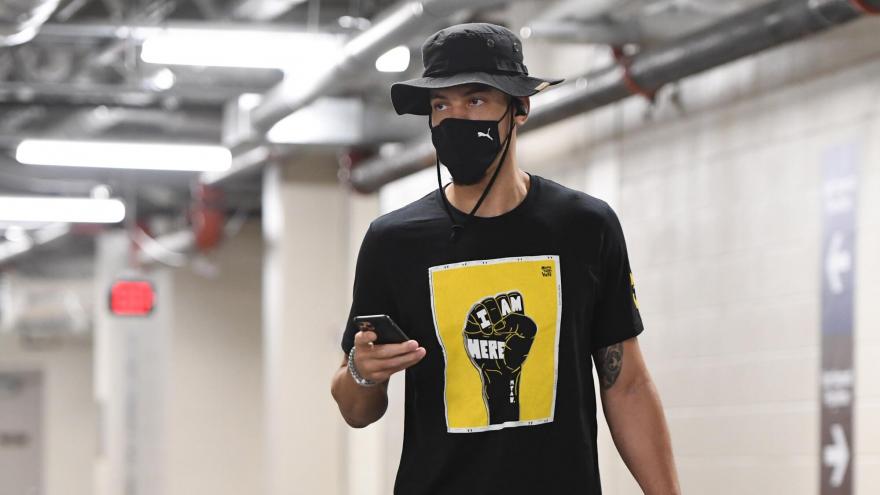 (CNN) -- Athletes -- many who have used their platforms to take stances against police brutality over the past few months -- expressed their disappointment Wednesday after a grand jury in Louisville, Kentucky, decided not to charge officers with killing Breonna Taylor.

"The white supremacist institution of policing that stole Breonna Taylor's life from us must be abolished for the safety and well being of our people," Colin Kaepernick wrote on Twitter Wednesday.

Taylor, a 26-year-old Black emergency room technician and aspiring nurse, was shot to death in March after Louisville police officers broke down the door to her apartment while executing a late-night warrant in a narcotics investigation.

Former police officer Brett Hankison, who one of the officers involved in the shooting, was indicted on first-degree wanton endangerment charges for his actions on the night Breonna Taylor was killed. Two other officers who also fired shots during the botched March raid were not indicted, meaning no officer was charged in the killing.

"I'm devastated, hurt, sad, mad! We want Justice for Breonna yet justice was met for her neighbors apartment walls and not her beautiful life. Was I surprised at the verdict. Absolutely not but damnit I was & still am hurt and heavy hearted! I send my love to Breonna mother, family and friends! I'm sorry! I'm sorry! I'm sorry!!"

In a separate tweet, James wrote, "JUST SAY HER NAME" in all caps.

James, who has been leading the way in setting an agenda of racial justice among the sport's most influential players, is among the many in the sports world to show their support for Taylor's family.

For months, athletes across leagues, including the NBA, WNBA, MLB and NFL, have taken unprecedented action in showcasing their solidarity with the Black Lives Matter movement. From refusing to play their regularly scheduled games to wearing attire with messaging demanding justice for Taylor, players have been vocal in their calls for social justice.

Los Angeles Lakers players Danny Green spoke out in a news conference with reporters Wednesday. He called the decision a "disappointment," but said the team would keep fighting.

"I think we're being heard, but obviously the goals that we're trying to achieve we're very far away from after seeing today's verdict. Like I said, it's a disappointment," he said.

He said he will continue to fight to "try to make things better, not just for us but for our future children, future grandkids. We want it to be a better place here for them to live."

WNBA player Kayla McBride, a guard on the Las Vegas Aces, said the news is "a tough pill to swallow, because it's a large part of why we're here."

The league dedicated its 2020 season to Taylor and the Say Her Name movement, which raises awareness for Black female victims of police violence.

All season, in Bradenton, Florida, WNBA players have worn warmup shirts with the words "Black Lives Matter" displayed on the front and "Say Her Name" on the back, along with Taylor's name on their jerseys.

"Obviously, this is one step," McBride said. "It's a small step. It's not enough by any means for Breonna Taylor and her family. It's tough when you're fighting for something bigger than yourself, maybe not get the result you want. You've just got to keep on fighting. That's what we're going to do."

The Denver Nuggets head coach Michael Malone also shared his disappointment with reporters on Wednesday, connecting the shooting of Taylor to Elijah McClain in Colorado.

"When I think about the tragedy of those police officers getting off, it also makes me think a lot closer to home, Elijah McClain, his case in Aurora, Colorado, how we're still demanding justice for the police officers who were involved in the death of Elijah McClain. That is still not the case," Malone said.

"That's just been tragic. I know we've been using our platform down here to try to bring about education and a voice in a lot of players on our team, especially also spoken out on justice for Breonna Taylor. We have not gotten that justice. That's a shame. Hopefully that will change at some point."

"It's really disappointing because justice should be served for her death, Breonna Taylor, and this movement in general, this Black Lives Matter, and understanding the neglect of not only Black people, but colored people in general," he said. "We have to do better as a country and as people."

"My heart is with the family of Breonna Taylor right now. My god," Rapinoe wrote on Twitter. "This is devastating and unfortunately not surprising. Black and brown folx in this country deserve so much more."