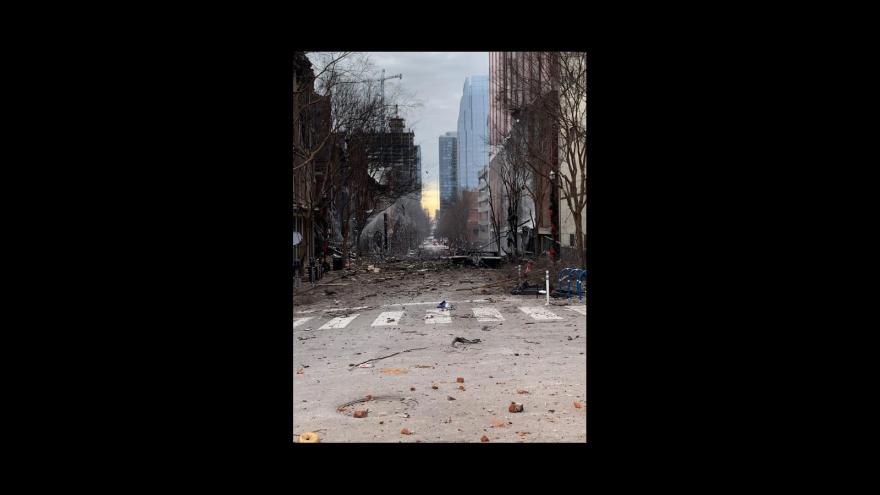 Burned cars and debris are seen on a street in downtown Nashville, Tennessee following an explosion on Friday, December 25, 2020.

(CNN) -- AT&T on Saturday continued working to restore outages caused by the Christmas Day explosion of an RV parked near a transmission building in Nashville that disrupted service in the region, officials said.

A statement posted on the company's website said that they were still facing challenges, including dealing with evacuations of the building due to a fire reigniting overnight.

Emergency responders are working with telecommunications workers to get communications up and running after the explosion, Nashville Fire Chief William Swann said during a press conference Saturday.

Swann said telecommunications workers were trying to get generators back in order so mobile phones will be back in operation. They are hoping that within the next day or so everything will be back online, Swann said.

AT&T says that they have teams on site working with safety and structural engineers. They said that the focus continues to be on safe and secure power restoration to the equipment.

According to the AT&T statement, teams are working around the clock on the company's recovery efforts. There are two portable cell sites that are now operating in the downtown area. AT&T says there are "numerous additional portable sites" that are in the process of being deployed in Nashville and throughout the region.

The statement also said that teams are "attempting to reconnect power to critical equipment" at the building. They are also working to reroute additional services to other regional facilities in an effort to restore service, it said.

Additional updates will be provided by AT&T later Saturday, the statement said.

AT&T on Friday confirmed that one of its network hubs was damaged in the Christmas blast.

"We have mobilized additional resources including our National Disaster Recovery team and are bringing in multiple portable cell sites to assist in the recovery efforts," AT&T spokesman Jim Greer said as night fell in Nashville.

T-Mobile said it was seeing some service issues due to the explosion but was working "diligently with our partners" on restoration.

According to a tweet from technology chief Neville Ray, the carrier was seeing service issues in areas of Nashville and Knoxville in Tennessee, parts of Louisville, Kentucky, and Birmingham, Alabama, and in areas of metropolitan Atlanta.

Earlier Friday, AT&T confirmed that the company was "in contact with law enforcement and working as quickly and safely as possible to restore service."

When one network hub is disrupted, typically by a hurricane or other natural disaster, some internet traffic can be rerouted, but not all.

That's why customers across Nashville and other parts of Tennessee reported losing wireless phone service and other connectivity.

Network hubs rely on commercial power with battery and generator backups. The damage to the facility may have impacted these systems and caused service to degrade later in the day on Friday.

"Power is essential to restoring wireless and wireline communications and we are working with law enforcement to get access to our equipment and make needed repairs," AT&T said Friday night.

The disruption at the downtown network hub had cascading effects at the airport and elsewhere.

The FAA said the ground stop was lifted after about an hour. "Pilots never lost touch with air traffic control," the agency said in a statement.

The FAA website shows that the ground stop was issued due to a ZME Frequency Outage.

ZME is an FAA air traffic control facility in Memphis that is responsible for controlling aircraft in the area at higher altitudes.

Flight service at Nashville International Airport "continues to be impacted by telecommunications issues," a tweet from the airport said around 3:30 p.m. CT.

On Friday evening the airport said in a tweet that "most flights are resuming, but there may be some delays."