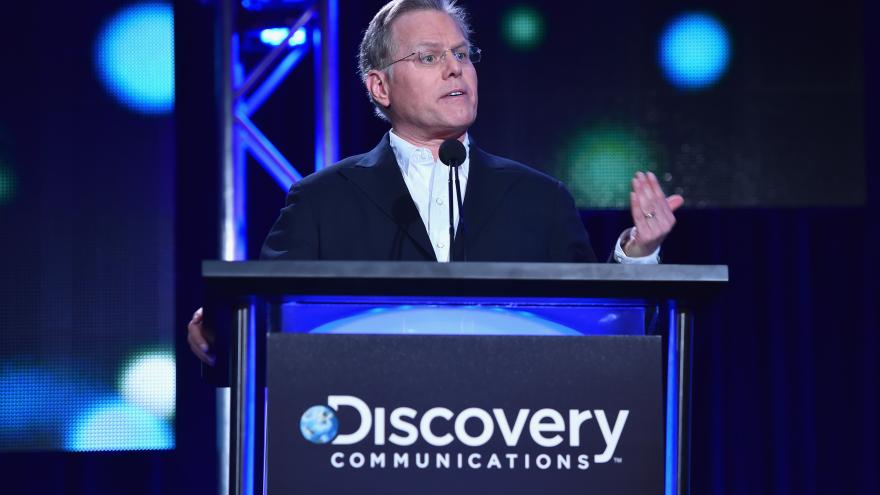 (CNN) -- The streaming TV race is about to get even more competitive.

On Monday morning AT&T and Discovery, Inc. announced a deal under which AT&T's WarnerMedia will be spun off and combined with Discovery in a new standalone media company.

The deal, subject to regulatory approval, will combine two treasure troves of content, including the HBO Max and discovery+ streaming services. CNN will be included in the transaction.

Discovery CEO David Zaslav will run the combined business, according to Monday's announcement. "I think we fit together like a glove," Zaslav said at a virtual press conference.

On one level, the tie-up is a logical way to better compete with Netflix and Disney, the two top streaming players. "Scale" is the word AT&T CEO John Stankey used repeatedly in interviews on Monday.

On another level, the transaction is also a complex way for AT&T to unwind its 2016 bid for Time Warner, which took effect in 2018, with the assets named WarnerMedia.

A spin-off will help AT&T prioritize its broadband business and pay down its huge debt load. "AT&T would receive $43 billion (subject to adjustment) in a combination of cash, debt securities, and WarnerMedia's retention of certain debt," Monday's announcement said. Zaslav said Monday the new media company will start with $55 billion in debt.

Shares of AT&T were up about 2% in morning trading. Shares of Discovery, which popped as much as 16% pre-market, were down about 2%.

The executives leading the transaction said they'll announce a name for the spun-off company later this week. They expect the deal to take effect in mid-2022.

In an interview with CNN's Poppy Harlow, Zaslav said that "'more' does make a difference," meaning more programming available in more ways.

"We think if you can take our content" at Discovery "together with the great content on HBO Max as well as the amazing production coming out of Warner Bros, that we'll have something that is truly unique," he said.

Added scale is also a factor in the cable television businesses that made both WarnerMedia and Discovery into media behemoths in the first place.

Cable remains hugely profitable, though the businesses are under pressure due to cord-cutting and streaming.

The Discovery-Warner portfolio will include six of the top-rated eight channels on cable in key advertiser demographics: CNN, TNT, TBS, ID, HGTV, and Food Network. This could give the company more leverage in negotiations with distributors and ad buyers.

Bloomberg News broke the news of the impending deal on Sunday. Zaslav and Stankey indicated Monday that the pairing had been in the works for months.

In many quarters the news is being seen as AT&T admitting defeat after an ill-fated attempt to bring content and distribution together.

Earlier this year AT&T also struck a deal to carve out its satellite business DirecTV at a significant loss from the 2015 purchase price.

And another telecom giant, Verizon, threw in the towel on its content efforts as well, agreeing to sell Yahoo and AOL for $5 billion.

Of course, the media world looks very different today than it did just a few years ago.

"We are now in a world where relevance and future success will be tied to greater scale and growth globally," Stankey said in a memo to WarnerMedia staffers. "To be one of the best global media companies requires not only broad and deep creative assets, but an investor base and access to capital to make it happen. The decision to combine WarnerMedia with Discovery is rooted in this conclusion."

Discovery's nonfiction-focused streaming service launched in January, utilizing a library of shows from channels like TLC and Animal Planet. At the time, Zaslav told CNN that discovery+ was a "great complement to someone who has Disney or Netflix, or HBO, Disney and Netflix."

Zaslav also emphasized Discovery's global reach. HBO Max, currently available in the US, is about to make an international push. Stankey said the combination will support HBO Max's global growth "and create efficiencies which can be re-invested in producing more great content to give consumers what they want."

Zaslav said Discovery and Warner currently spend a total of $20 billion a year on content. Netflix plans to spend at least $17 billion on content this year.

"Executives from both companies" will be in "key leadership roles," according to the press release. WarnerMedia CEO Jason Kilar was not mentioned in the announcement, but Zaslav signaled that Kilar may remain with the company. "Jason is a fantastic talent," Zaslav said.

Zaslav also affirmed the independence of CNN's newsroom. He said he commits to "the greatest editorial integrity" for CNN and intends to fund CNN's streaming service plans.

Zaslav, a longtime friend of CNN Worldwide chief Jeff Zucker, said at the press conference, "We love CNN... We think one of the true differentiators of the future is live news, live sports."