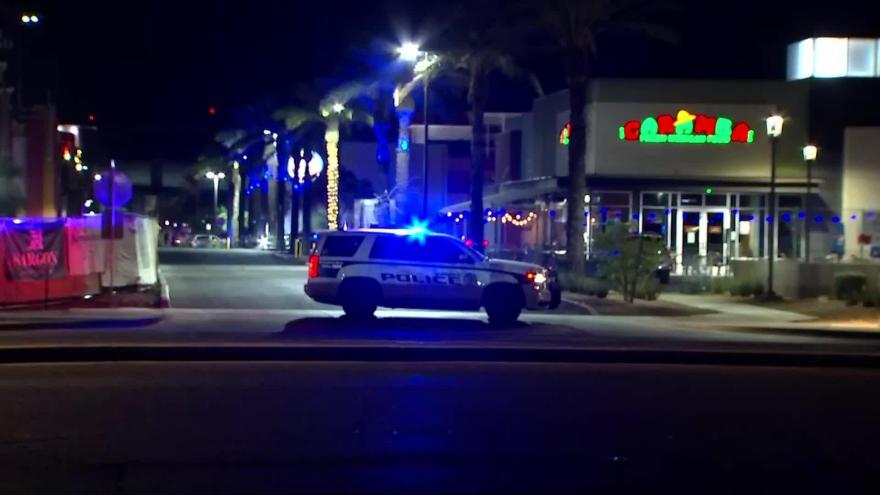 A suspect is in custody after three people were shot Wednesday night at the Westgate Entertainment District in Glendale, Arizona, police say.

(CNN) -- The 20-year-old suspect in a shooting at a Glendale, Arizona, entertainment district considered himself an involuntary celibate, or "incel," and was targeting couples, a prosecutor said Thursday.

Armando Hernandez Jr. "had the purpose of taking out his expressed anger at society, the feeling that he has been bullied, the feeling that women didn't want him," Maricopa County prosecutor Edward Leiter said at Hernandez's first court appearance.

A woman, 30, was injured but not transported to the hospital, while a 16-year-old girl was taken to a medical center with non-life-threatening injuries, he said.

Hernandez is charged with three counts of aggravated assault with a deadly weapon, three counts of aggravated assault with serious physical injury, five counts of discharging a firearm in city limits, one count of criminal damage-defacing property, one count of criminal damage-recklessly damaging the property of a utility, and a count of disorderly conduct, according to the Maricopa County Sheriff's Office.

Hernandez was being held on $1 million cash bond after his first court appearance, a spokesman for the sheriff's office confirmed to CNN.

Detectives have searched Hernandez's home and vehicle, Stewart said. A black assault rifle was recovered at the scene, he said.

'He felt that he had been bullied'

"The suspect did, in this case, admit to detectives that he was planning on going to Westgate to harm 10 victims with this horrendous act," Stewart said. "He wanted to gain some respect, and he felt that he had been bullied in his life."

Calls reporting a shooter at the Westgate Entertainment District came in to the 911 center about 7:25 p.m. Wednesday.

The second officer on the scene, a lieutenant, located Hernandez and took him into custody without incident, Stewart said. "He did mention to the investigators that he gave up when he saw the officers responding."

Though Hernandez acknowledged to police he was the gunman, Stewart said, it is not clear why he picked the number 10. It's also unclear why he allegedly chose to seek victims at Westgate.

The charge related to damaging a utility's property stems from Hernandez shooting a transformer, which caused power to go out, Stewart said. As the transformer was located near one of the victims, it may have been a stray round, the police spokesman said.

Devon Cordova, who says he is a friend of the alleged shooter, called police after he saw Hernandez post a video to Snapchat that appears to capture moments before and during the shooting, he told CNN. Cordova posted Hernandez's recording to Twitter and it has since been taken down, though CNN procured a copy before it was deleted.

In the video, the shooter identifies himself as Armando Junior Hernandez and in an eerily chipper voice says, "I'm going to be the shooter of Westgate 2020. This is to get back to mean society, so let's get this done."

The shooter is seen firing a weapon in an outdoor breezeway, and at one point in the video, a weapon is trained on a woman lying beside a car in the parking lot. She tells the person behind the gun, "You already got me, dude."

Westgate Entertainment District "will continue to work closely with the Glendale Police Department and in-house security to best ensure the safety of our customers, tenants and residents," the company said in a statement.

Shortly after the shooting, the Glendale police asked people still in the complex to shelter in place while they ensured there were no other shooters or victims.

Chipotle employee Isaac Osuna, who was among those caught in the lockdown, heard at least five shots before seeing people flee the scene, he said.