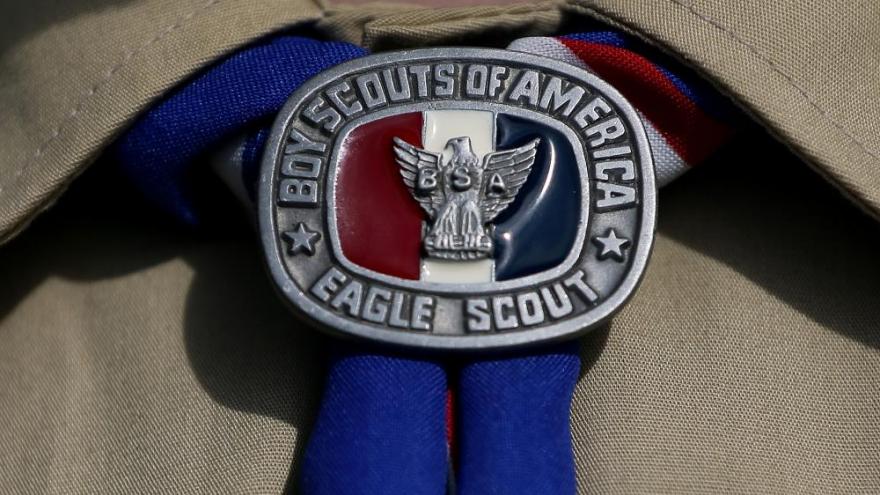 A detail view of a Boy Scout uniform on February 4, 2013 in Irving, Texas. The BSA national council announced they were considering to leave the decision of inclusion of gays to the local unit level.

(CNN) -- The Boy Scouts of America will be facing at least 92,700 claims of sexual abuse as former scouts submit filings against the bankruptcy-bound organization, said one of the lead attorneys for the legal team representing the claimants.

The initial estimate of 82,000 claims was released on Sunday. The updated number of 92,700 came from bankruptcy court after the 5 p.m. deadline for submitting claims Monday, attorney Andrew Van Arsdale told CNN in an email.

Gill Gayle, 58, who lives in Los Angeles but was raised in Alabama where he says he was twice abused as a scout in the 1970s, said this many people coming forward brings awareness to the issue in BSA.

"I'm not pleased there's that many men this has happened to," Gayle said. "I am glad this many reports is grabbing people's attention and will prevent other children from being assaulted like we were."

Gayle says he worked hard trying to be a part of the outreach to victims, saying he wanted "as many men to come forward as possible. I wanted them to know that what they went through would be recognized."

"We are devastated by the number of lives impacted by past abuse in scouting and moved by the bravery of those who have come forward," a BSA statement said. "We are heartbroken that we cannot undo their pain."

Sex abuse in the BSA was an "unspoken norm," according to Van Arsdale, one of the lead attorneys who says he has communicated with thousands of alleged survivors over the past 19 months.

"Based on what we are hearing from survivors, sexual abuse was a rite of passage in troops across the country, similar to other tasks where children had to ... perform certain duties to earn their coveted merit badges," he said in a statement.

BSA files for bankruptcy after lawsuits

When it filed for bankruptcy, the BSA said it was "outraged that there have been times when individuals took advantage of our program to abuse innocent children."

The bankruptcy filing, which effectively placed the lawsuits on hold, had been a matter of speculation since at least December 2018. In April 2019, court testimony indicated that the organization believed more than 7,800 of its former leaders had sexually abused at least 12,000 children since the late 1940s.

Alleged survivors will now have to pursue their claims in bankruptcy court rather than via civil proceedings, Michael Pfau, a Seattle-based attorney representing hundreds of alleged victims, told CNN in February.

"Their lives won't be scrutinized, but they lose their right to a jury trial. For a lot of abuse survivors, telling their story in a court of law and forcing the organizations to defend their actions can be cathartic. That won't happen with a bankruptcy," he said.

Pfau estimated at the time that the number of claims would surpass those targeting the Catholic Church.

"The Catholic bankruptcies are limited in geographic scope. Here there will be claimants from all 50 states and the American territories," Pfau said. "We can talk about files and numbers, but in reality if you step back and realize the scope of the human carnage, it's stunning."

After reportedly hiring a firm specializing in Chapter 11 bankruptcies, the Boy Scouts initiated several changes -- allowing girls to join, naming a new president and partnering with an organization for male survivors of sex abuse -- before making the bankruptcy filing official earlier this year.

In an open letter to alleged victims, BSA national chairman Jim Turley wrote that the bankruptcy filing was aimed at ensuring the organization "is able to equitably compensate all the victims of abuse." BSA had voluntarily restructured its finances and created a compensation trust, he wrote.

"The BSA cannot undo what happened to you, but we are committed to supporting you and to doing everything in our power to prevent it from happening to others," Turley wrote.

The bankruptcy filing, which came just days after the group's 110th anniversary, listed BSA assets of between $1 billion and $10 billion. Its liabilities were estimated at between $100 million and $500 million.

"The question remains if the BSA will make good on their word to do everything in their power to make the tens of thousands of lives they altered better. The BSA failed them once as children. We hope they do not do it again this time around," Van Arsdale said in an email.

The recent statement from the Boy Scouts said, "We intentionally developed an open, accessible process to reach survivors and help them take an essential step toward receiving compensation. The response we have seen from survivors has been gut wrenching. We are deeply sorry."

After Monday's deadline, the next step is for third-party advisers to review the claims, while BSA "works to develop a plan of reorganization to fund the proposed trust," the organization said.

"We are committed to working as expeditiously as possible to provide survivors of abuse with equitable compensation," the BSA statement said.

While many would see the claims as a step forward, Gayle says there's no winning in this situation.

"There's no winning a child sexual assault case," he said. "You don't ever really recover from this."