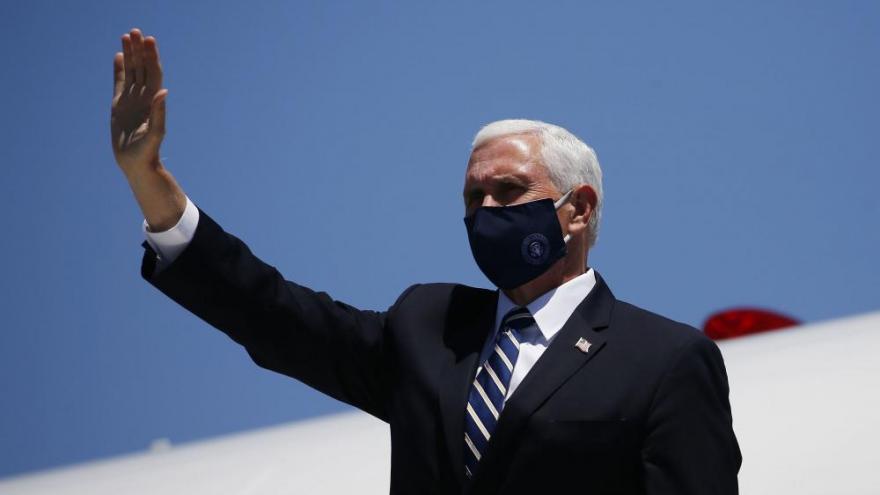 At least eight Secret Service agents are currently holed up in a hotel in Phoenix, some suffering the flu-like coronavirus symptoms after coming down with the disease while preparing for a visit by Vice President Mike Pence, two people familiar with the matter say.

(CNN) -- At least eight Secret Service agents are currently holed up in a hotel in Phoenix, some suffering the flu-like coronavirus symptoms after coming down with the disease while preparing for a visit by Vice President Mike Pence, two people familiar with the matter say.

Last month, up to 15 agents who tested positive for the virus loaded into cars and drove themselves home, avoiding flights after becoming infected while preparing for President Donald Trump's campaign rally, according to another source familiar with the situation.

And in South Dakota, agents have been on the ground for days preparing for Trump's visit to Mount Rushmore -- but also for what some view as the inevitability that one or many of them will contract the virus.

On Thursday morning, a group of approximately 20 security officers, including Secret Service agents, conducted a walk-through of the event clustered close together, surveying seating at the top of the Mount Rushmore amphitheater, the press area and the stage where the President will speak. Just two members of that group wore a mask; a separate group of a half-dozen uniformed officers assembling magnetometers at the park's entrance did not wear masks. But every agent screening attendees at the entrance was masked hours later.

As Trump and Pence resume regular travel schedules after months of pandemic-induced lockdown, the risks posed to the large contingent of US Secret Service personnel who accompany them have become obvious as roughly two dozen agents -- if not more -- have tested positive for the virus, sources familiar with the situation said.

The health peril has emerged as a sore point for many within the agency, where sources describe a heightened sense of anxiety and anger over being put at what some view as senseless risk. One agency source said there is "growing anger and frustration" among some in the Secret Service at what they consider to be "unnecessary trips and exposure" because of Trump and Pence's travel.

"Even ardent Trump supporters are fed up," one agency source said. "We signed up to take a bullet for him, we did not sign up to get sick for him for no good reason."

In addition to the agents who have become ill, many more have been required to quarantine after coming into contact with others who tested positive, putting a strain on the agency's numbers as Trump and Pence continue to schedule trips around the country. Each trip requires multiple teams of agents, who work in shifts to ensure proper rest.

White House spokesman Judd Deere said the President "takes the health and safety of everyone traveling in support of himself and all White House operations very seriously."

"When preparing for and carrying out any travel, White House Operations collaborates with the Physician to the President and the White House Military Office, to ensure plans incorporate current CDC guidance and best practices for limiting COVID-19 exposure to the greatest extent possible," he said in a statement.

Inside the agency, some have wondered just how essential the trips taken by Trump and Pence have been, particularly the campaign events sources have previously described to CNN as meant partly to improve the President's mood.

Pence's recent travel has all been focused on coronavirus -- including to Sun Belt states where cases are surging -- and aides have said it is important the vice president get an on-the-ground view of the crisis.

The vice president's office did not immediately return a CNN request for comment.

"President Trump wanted me to be here to say to you and to the people of Arizona that we're with you," Pence said Wednesday as he met with the state's governor. "We're going to make sure you have what you need, when you need it, to meet this moment."

But Pence's travel also has the effect of lending urgency to a pandemic response that Trump has been accused of alternately botching and ignoring. And previously Pence communicated extensively with governors via teleconference.

The duties required of agents often make following federal guidelines on social distancing difficult, though the agency has said it is working to keep its employees safe.

"The health and safety of our workforce, their families, and that of our protectees remains the agency's highest priority," Secret Service director of communications Catherine Milhoan said in a statement. "The agency continues to operate in compliance with the Centers for Disease Control and Prevention recommendations through the US Secret Service Office of Safety, Health and Environmental Programs."

Neither Trump nor Pence has commented publicly about the roughly two dozen agents who have tested positive. When news emerged ahead of his Tulsa event that some staffers and agents had received positive results, the President was enraged that it came out ahead of the rally, overshadowing the event itself.

At least eight Secret Service agents assigned to Pence's detail ahead of his trip to Arizona this week tested positive for the coronavirus right before the vice president was scheduled to travel there, a law enforcement source told CNN.

It's unclear if there's overlap with the agents from Tulsa and Phoenix.

The positive tests forced a one-day delay in the trip so the Secret Service could swap in a healthy team -- Pence had been scheduled to go to Arizona on Tuesday, but instead traveled on Wednesday. Ahead of Pence's trip, the state was reporting record highs for both new daily cases and deaths since the state started posting data publicly in mid-March.

After testing positive, the agents quarantined at a hotel in Phoenix, people familiar with the matter said. Some are symptomatic and are being attended to by a doctor, though haven't yet required hospitalization, the sources said.

Pence's trip originally included several more public stops, including in Yuma, but the trip was scaled back amid the recent spike of Covid cases in Arizona. While there, Pence received briefings and updates from local officials and did not leave the airport.

It came more than a week after Trump's rally in Oklahoma, which disappointed the President because of a low turnout but nonetheless prompted a flurry of cases among his staff and Secret Service detail.

Though the publicly released number of agents who tested positive while working at the Tulsa rally is two, a source familiar with the matter said the actual number is closer to 15.

The Secret Service agents were tested in Tulsa on June 19, one day before the rally, and those who tested positive received their results within 48 hours -- meaning some or all could have been at the rally itself without knowing they had tested positive. All were tested again in Washington six days after the rally.

In addition to the Secret Service personnel, a number of Trump campaign staffers tested positive for coronavirus while working on the Tulsa rally. Many campaign officials entered quarantine after the event as a precaution. All were tested again days after the rally.

At least one high-profile supporter of the President's who attended the rally, former presidential candidate Herman Cain, was hospitalized after coming down with coronavirus. His spokesperson said it was impossible to know whether he contracted the virus at the rally, where he was seen without a mask.

CORRECTION: This story has been corrected to reflect that not all of the individuals conducting the pre-event walk through were Secret Service agents.