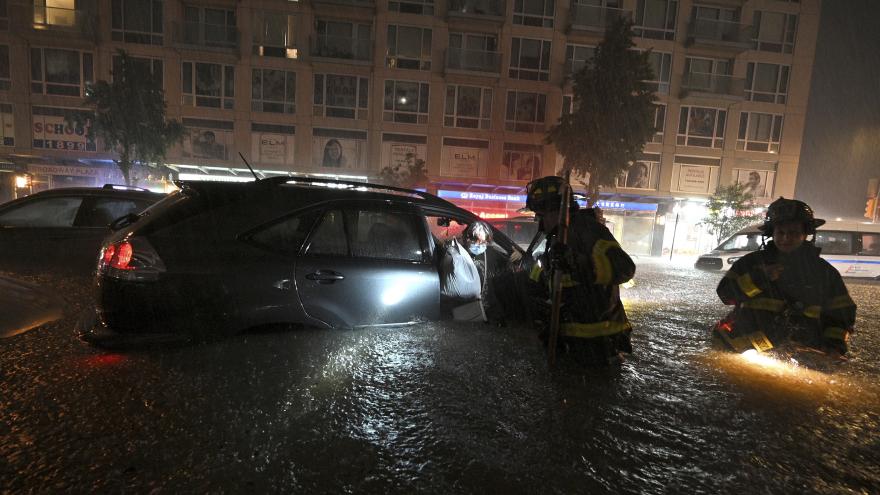 (CNN) -- At least eight people were killed due to flooding as the Northeast was slammed by torrential rain from the remnants of Hurricane Ida, officials said Thursday.

Seven of the deaths were reported in New York City and an eighth was in New Jersey.

Across the entire Northeast, roads were transformed into fast-flowing rivers, the nation's largest subway system was almost at a standstill and water rescues were reported after the record-setting downpour.

A 45-year-old woman and a 22-year-old man from the 183rd Street area were killed, the NYPD told CNN. At a different location in Queens, near Grand Central Parkway, a 48-year-old woman died due to the flooding in her home, NYPD said.

A 50-year-old man, a 48-year-old woman and a 2-year-old male child were all pronounced dead at the scene of their 64th Street residence after NYPD officers responding to a 911 call of flooding arrived and found them unconscious and unresponsive, police said.

In Brooklyn, a 66-year-old man was found dead in his flooded home near Ridgewood Avenue by a police officer, the department told CNN.

The tri-state region was deluged by the remnants of Ida.

The city's subway system was halted with the exception of two lines due to the flooding, leaving many people stranded and unsure of how they would get home.

Some were idled on asubway near Times Square around 1:20 a.m. after traveling from the US Open tennis tournament in Queens. Videos from the station showed a waterfall flowing off of the train car roof and onto people trying to get out as well as a drink kiosk being whirled around by the wind.

As water gushed into stations, first responders have been evacuating people from trains, Acting MTA Chair and CEO Janno Lieber said in a statement.

The city also instituted a travel ban for all non-emergency vehicles until 5:00 a.m.

"We will have a tough few hours coming up until we get the rain out of here. I want to really urge everyone moving around tomorrow, do not go into a street, a road, a highway with a lot of water accumulated. That can be super dangerous," New York Mayor Bill de Blasio said Wednesday night.

New York Gov. Kathy Hochul said the level of flooding was far more than anyone expected.

"We can take all the precautions in advance, and we did deploy our assets to be on the ground in anticipation, but mother nature will do whatever she wants, and she is really angry tonight," Hochul told CNN's Don Lemon. "We have to be prepared to cleanup tomorrow. I'll be on site in the morning to make sure this is going well, but right now we're in a very dire situation."

Tornado touches down in South Jersey

In neighboring New Jersey, the body of a man in his 70s was retrieved from the flooding after his vehicle was caught in rushing water, Passaic Mayor Hector Lora told CNN's Don Lemon.

Firefighters were swept under the vehicle, making it nearly "impossible" for them to reach the man, Lora said.

The firefighters were able to rescue two other individuals in the vehicle, according to the mayor.

Many towns in the North Jersey area reported massive flooding, damaging homes and businesses and forcing drivers to abandon their cars. In Clifton, a fire ambulance was seen submerged in the flood waters along with several other submerged vehicles.

In South Jersey, a tornado touched down in Mullica Hill, which is about 25 miles from Philadelphia. In two videos, debris can be seen twisting up in the tornado.

"I had just left the gym and headed in the same shopping area to a small sandwich shop. I parked my car and called my husband to see if he wanted me to bring home food," said Kristi Johnson who recorded the videos and shared what she witnessed with CNN.

"While I was on the phone I looked out my driver's window and saw the swirling clouds and debris flying toward me. I rolled my window down and it sounded like a train coming. I hung up on my husband and started to drive away from it. It was extremely scary."

Meanwhile, Newark, the state's largest city, recorded its all-time wettest day Wednesday. And in Trenton, the state capitol, officials advised residents in the Island neighborhood to evacuate by 8 a.m. Thursday.

The wrath of Ida's remnants was felt in other states before slamming the New York region.

In Pennsylvania, the storm had trapped a school bus in floodwaters in Shaler Township,. The school district and local volunteer fire company confirmed that 41 passengers were rescued from the bus.

Video shows a team of at least four wading through water nearly up to their waist to help the passengers onto a small boat. The rescued students were then transported safely to the high school, Shaler Area School District said.

"This is an extremely dangerous storm that is impacting the entire state," said Wolf according to a press release. "As we continue to monitor the conditions, I ask everyone to please stay home if you're able."

In Maryland, Ida's downpour flooded an apartment complex, leaving one person dead and another missing.

Fire and Rescue personnel evacuated dozens of people from the Rock Creek Woods apartment complex in Rockville, officials said Wednesday. From the storm, 50 apartments were impacted and 12 were flooded, according to police.

A 19-year-old man was found dead, but the cause of death has not been confirmed, Montgomery County Police Department Public Information Officer Casandra Durham told CNN. Three individuals and one firefighter were transported to area hospitals for non-life-threatening injuries.

The rest of the residents were transferred to a local recreation center where the Red Cross and Montgomery County Health and Human Services were stationed to help.

A tornado also touched down in the state, according to Bud Zapata, the Annapolis Fire Department Public Information Officer.

The tornado was reported to have touched down in a primarily commercial area of Annapolis. No injuries have been reported, but some private residences were damaged and there is an active gas leak in the area. Fire, police and other agencies are assessing damage, Zapata said.

The National Weather Service had tweeted that a radar-confirmed tornado was in the area and to "seek shelter if you are in the path of this storm!"