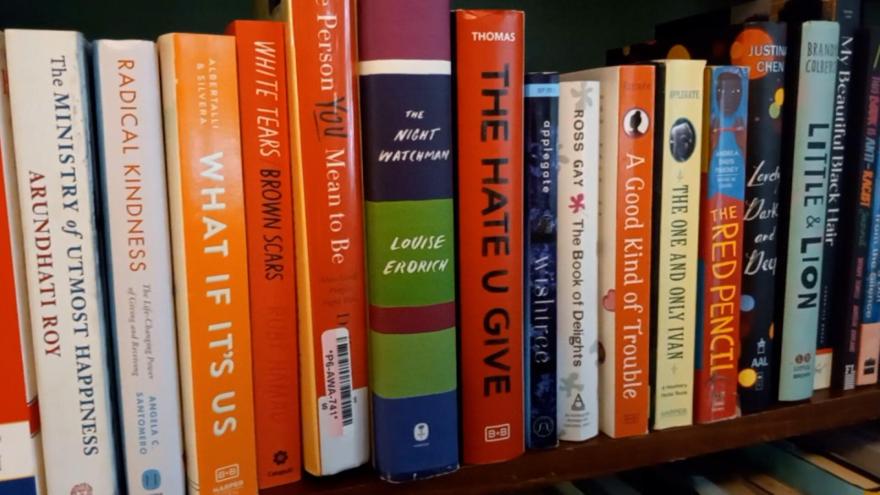 At least 50 groups have recently played a role in the evolving movement to have books removed from schools, a new PEN America analysis shows.

(CNN) -- At least 50 groups have recently played a role in the evolving movement to have books removed from schools, a new PEN America analysis shows.

PEN America, a literary and free expression advocacy organization, released Monday its latest analysis of bans on school library books and class curricula that have occurred in the 2021-2022 school year.

Jonathan Friedman, the director of PEN America's free expression and education programs and author of the report, said that in the past decade "there was never organization at this scale or with this kind of momentum" but it's important to understand that these censorship efforts, more often than not, are led by people who are not parents and who only learned about the books online without reading them but demand officials to remove them from shelves.

The organization identified 50 groups operating at the national, state, or local level that advocate for bans in K-12 schools and said it appears that the majority of those groups formed in the last year. They range from local Facebook or online groups to more established conservative organizations.

"While we think of book bans as the work of individual concerned citizens, our report demonstrates that today's wave of bans represents a coordinated campaign to banish books being waged by sophisticated, ideological and well-resourced advocacy organizations," said Suzanne Nossel, chief executive officer of PEN America.

One of those groups is Moms for Liberty, a conservative group that came together last year?to fight for?parental?rights in Florida and has since spread across the country. PEN America has identified another seven national groups with numerous chapters, as well as 38 groups operating at the state, regional, or community level that appear unaffiliated with the national groups or with one another, the report says.

"Some of the groups espouse Christian nationalist political views, while many have mission statements oriented toward reforming public schools, in some cases to offer more religious education," according to the report.

Friedman said some of the groups stem from the "anger fomented against schools during the pandemic" as some people shared their frustration over school closures, mask mandates, or vaccines. Other groups "have been around for a long time and have now moved into putting pressure on schools in new ways or with new success," he said.

Members of Moms for Liberty have taken to podiums at school board meetings and rallies to protest mask and vaccine mandates,?materials in books and curricula related to race and LGBTQ rights,?and?critical race theory (CRT), among other issues.

PEN America said the actions of these groups can be "linked directly" to at least 20% of the book bans enacted in the 2021-2022 school year. Those actions included members making statements at a school board meetings, submitting list of books for formal reconsideration, or filing paperwork to challenge books with school districts.

While people in America have the right to organize and advocate under the First Amendment, PEN America says it's concerned with how those tactics are being used with "the end goal of restricting or banning books" and how often schools are giving into the groups' demands without objection.

"Parents and community members play an important role in shaping what students learn in school but this goes far beyond organic expressions of concern or the normal give-and-take between parents and educators in a healthy school environment," Nossel said. "These groups have made it their mission to undermine educators, sabotage students' freedom to read and stoke divisive battles that distract from teaching and learning."

Politicians want to ban more books. Austin's library system is celebrating them instead

About 41% of those were books that tell stories related to LGBTQ people or that have a queer lead or prominent secondary character, the report says. Another 40% of the titles have main characters who are people of color, while 21% of titles directly address issues of race and racism, the report said.

The findings are similar to those released last week by the American Library Association, which said efforts to censor books in the US are on track to surpass last year's count.

The ALA's Office for Intellectual Freedom has tracked 681 attempts to ban or restrict "library resources" in K-12 schools, universities and public libraries nationwide between January 1 and August 31.

The group tracked 729 book challenges in 2021 based on direct reports to the ALA, news coverage and public records. The ALA has said it was the highest number of attempted book bans since the organization began compiling its list of the most challenged books.

The organization has been collecting data about banned books since 1990, but it has published a list of the most-challenged books since at least 2001.

"The unprecedented number of challenges we're seeing already this year reflects coordinated, national efforts to silence marginalized or historically underrepresented voices and deprive all of us -- young people, in particular -- of the chance to explore a world beyond the confines of personal experience," said ALA President Lessa Kanani?opua Pelayo-Lozada.