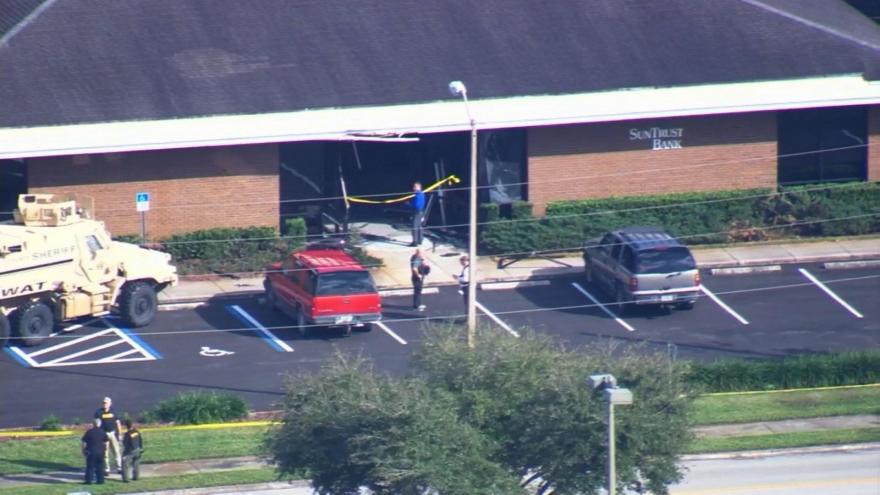 **Embargo: Tampa, Fla.** Highlands County Commissioner Don Elwell said that multiple people have been shot in a "hostage situation" at a SunTrust Bank in Sebring, Florida.

(CNN) -- A gunman who barricaded himself in a SunTrust Bank in Florida killed at least five people in the branch on Wednesday, Sebring Police Chief Karl Hoglund said.

The suspect called authorities to say he had entered the bank in Sebring, about 85 miles south of Orlando, and began shooting, according to Hoglund. Authorities identified the suspect as 21-year-old Sebring resident Zephen Xaver, who is in custody.

"This is a terrible day for Sebring, Highlands County and for the state of Florida," Gov. Ron DeSantis said.

'I have shot five people'

The incident began with the phone call to authorities from the suspect shortly after 12:30 p.m., officials said.

"I have shot five people," the caller said, according to Sebring Police. Sebring Police and Highlands County Sheriff's Office deputies responded to the scene.

Initial negotiations to try to get the barricaded suspect to leave the bank were not successful, so a SWAT team entered the bank and continued negotiations.

The suspect eventually surrendered to the SWAT team at the bank along US-27, between Lake Jackson and Little Lake Jackson, police said.

The FBI and the Florida Department of Law Enforcement are assisting in the case. Authorities are still investigating the motive.

Suspect's father says he is heartbroken for the victims

The elder Xaver said his son moved to Florida about a year ago.

"He wasn't raised to be like this. He's always been a good kid. He's had his troubles," he said without elaborating, "but he has never hurt anyone ever before."

Suspect worked as a correctional officer trainee for two months

Zephen Xaver was employed as a correctional officer trainee at Avon Park Correctional Institution and resigned two weeks ago, according to Patrick Manderfield, a spokesperson for the Florida Department of Corrections.

He was hired by the facility on November 2 and resigned on January 9, Manderfield said.

SunTrust Chairman and CEO Bill Rogers said company officials "are deeply saddened by the tragic shooting" at the branch.

"We are working with officials and dedicating ourselves to fully addressing the needs of all the individuals and families involved. Our entire team mourns this terrible loss," Rogers said in the statement.

Sebring in in Highlands County in the south-central part of the state, and had a population of just over 10,000 as of the 2010 US Census.