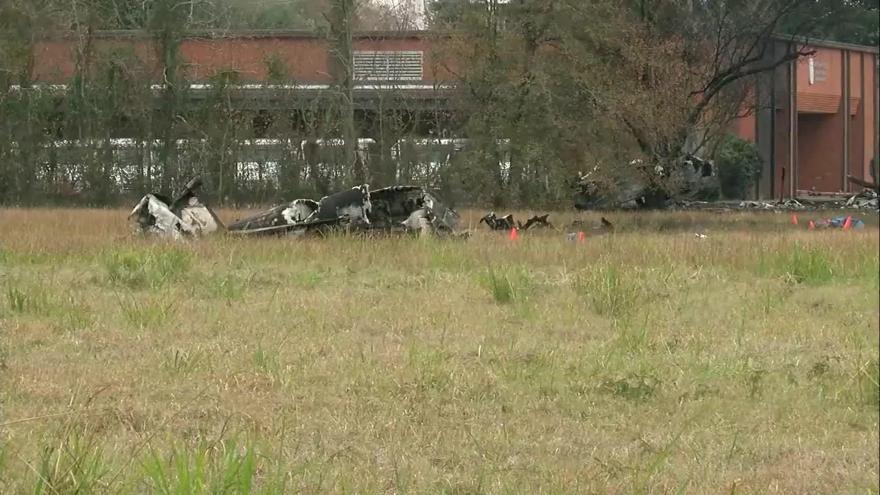 Wreckage of the eight-passenger plane is seen in a field in Lafayette, Louisiana.

(CNN) -- Five people died Saturday when a small plane that was headed to Atlanta for a college football playoff semifinal crashed near Lafayette Regional Airport in Louisiana, officials said.

A sixth person on board survived the crash, which occurred around 9:22 a.m. CT, Lafayette Fire Chief Robert Benoit Benoit said in a news conference.

One of the people killed was a sports reporter whose father-in-law is a coach for Louisiana State University's top-ranked football team.

McCord was a sports reporter with WDSU television in New Orleans. She was the daughter-in-law of Louisiana State University Offensive Coordinator Steve Ensminger, according to WDSU. LSU is playing in Atlanta on Saturday in one of the NCAA's two national championship semifinals and Ensminger is in the LSU coaches' booth.

McCord was a former employee of 104.5 ESPN Baton Rouge. During a pregame show, 104.5 ESPN radio host Matt Moscona said on-air that McCord was on her way to Atlanta to watch the LSU game.

"Steve and his wife and his family are very distraught," Orgeron said.

Afterward, Orgeron said he learned of the crash by text message about 12:30 p.m. ET, then told Ensminger. Two LSU stars, Joe Burrow and Justin Jefferson, said they didn't find out about McCord's death until after the game, in which LSU players set several college football playoff records in winning 63-28.

Joel Vilmenay, the WDSU's president and general manager, said his staff was devastated. He called McCord an amazing talent.

"Carley's passion for sports journalism and her deep knowledge of Louisiana sports, from high school to the professional ranks, made her an exceptional journalist," he said. "As we reflect on her impressive body of work, we offer our deepest condolences to her family."

The injured passenger was identified as Stephen Wade Berzas, 37. He is in critical condition, Lafayette Fire Department spokesman Alton Trahan said in a news release.

Three people were injured on the ground, including a person who was in or near a car and two employees of a nearby post office, Benoit said. The postal workers were treated for smoke inhalation and are doing fine, he said.

The eight-passenger aircraft was taking off from the airport when it crashed, Benoit said. The crash site is about 4 miles from the airport. The NTSB identified the aircraft as a Piper PA-31T.

Officials arrived at the crash site at 9:30 a.m., Benoit said. Several local and state agencies were on the scene cooperating, and the FAA has done a preliminary investigation, he said. Authorities expect the NTSB to arrive later Saturday evening, Benoit said.

Weather conditions at Lafayette Regional Airport were listed as foggy throughout Saturday morning, with a visibility of 0.75 miles, according to the National Weather Service. At 7 a.m. local time, visibility was listed at 0.25 miles, which the weather service designates as "dense fog."

Lafayette is about 130 miles west of New Orleans.