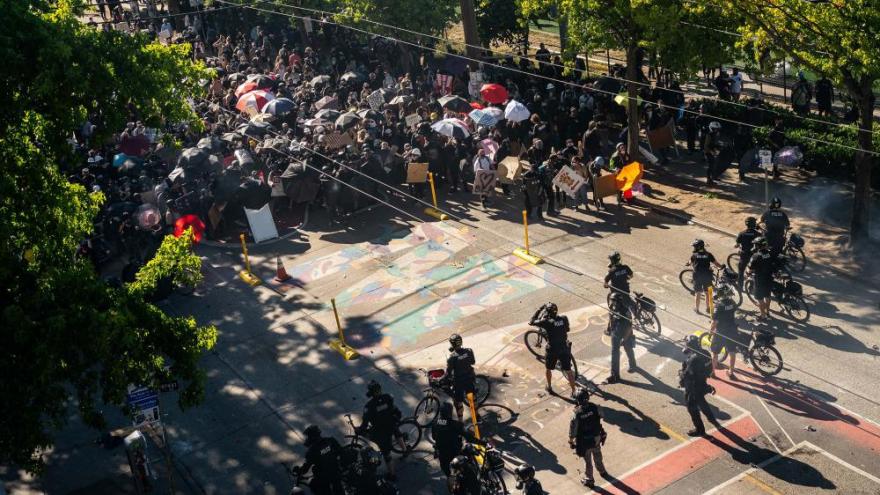 Police push demonstrators back atop a Black Lives Matter street mural in the area formerly known as CHOP during protests in Seattle on July 25, 2020 in Seattle, Washington.

(CNN) -- Seattle police arrested at least 47 people Saturday evening in demonstrations against police violence and the presence of federal law enforcement in cities like Portland, Oregon.

Police declared the protest a riot and said protesters threw large rocks, bottles, fireworks and other explosives at officers. Others set fire to a portable trailer and a construction site, police said in a series of tweets.

At least 47 people were arrested on charges of assaulting officers, obstruction and failure to disperse, police said.

Police said 59 officers were injured from having projectiles thrown at them, according to police. The injuries included abrasions, bruising, burns and a torn meniscus, according to a Sunday press release. Most officers were able to return to duty, the department's Twitter said. One officer was hospitalized with a leg injury caused by an explosive.

During the protest officers were struck with explosive, rocks, bottles and wood and an explosive device was thrown into the East Precinct, causing structural damage, the release said. The arson/bomb squad is investigating the incident.

The protests were held in solidarity with demonstrations in Portland, Oregon, where federal law enforcement officers and protesters have violently clashed in a small area near the federal courthouse. In Portland, local and state officials have said the federal officers, who wear camouflage fatigues and have used tear gas to disperse crowds, are exacerbating the protests.

Seattle has been the scene of protests over police brutality and systemic racism, including in a six-block area controlled by protesters after police abandoned their precinct -- the Capitol Hill Organized Protest or Capitol Hill Autonomous Zone.

The zone known as the CHOP was started by demonstrators calling for justice in the death of George Floyd. But the demonstration devolved over time, and after a series of shootings, police cleared the zone on July 1. As CNN wrote at the time, CHOP's failure was a case study in human nature, violence, mental illness, homelessness, and the difficulty in imagining a world without police.

On July 4, a 24-year-old protester was killed during a demonstration when a man drove his vehicle into a group of protesters.