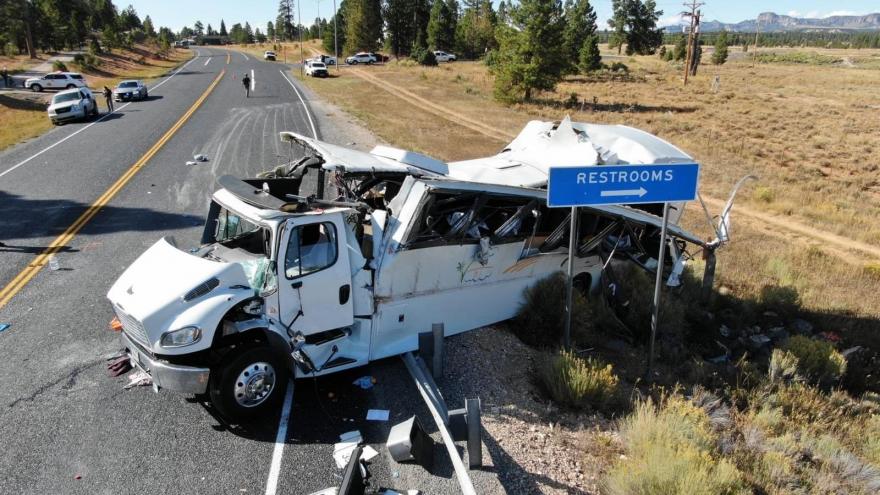 The tour bus crashed Friday morning near a rest area on Utah Highway 12 in Garfield County. Thirty people, including the driver, were on the bus when it "ran off the road and rolled into the guardrail," the Garfield County Sheriff's Office said in a statement.

Between 12 and 15 passengers suffered "very critical injuries" and 10 passengers had minor to serious injuries, the Utah Highway Patrol said. All the injured passengers were taken to area hospitals, including several by helicopter, the highway patrol said.

Photos provided by the highway patrol showed first responders treating passengers on the road, just feet away from the heavily damaged bus. Hours after the crash, the remains of the bus were still resting on the guardrail, surrounded by debris and with its top smashed in.

Employees of the nearby Bryce Canyon Resort told CNN their manager was called to crash scene to assist first responders with translating for the Chinese tour group. The manager is one of the few Chinese speakers in the area, the hotel staff said.

Nineteen people are being treated at Garfield Memorial Hospital in Panguitch, Utah, said Lance Madigan, a spokesman with Intermountain Healthcare.

Three people are in critical condition, 11 are in serious condition and three are in fair condition, Madigan said. He said he did not have information yet on the conditions of the other two patients.

Three passengers were taken to Sevier Valley Hospital in Richfield, Madigan said. Updates on the conditions of all the patients will be provided at a later time, he said.

The highway was closed in both directions approximately 3.5 miles west of the park for several hours while the Utah Highway Patrol investigated the crash. The National Transportation Safety Bureau said it is sending a 10-person team to assist the investigation. The team will arrive Saturday.

The Chinese Embassy in the Washington, D.C., said it has sent officials to the area to assist the victims.

"We are saddened to hear about the accident in Utah involving a bus carrying Chinese tourists. We are thankful to authorities in Utah for their assistance. The Embassy has initiated its emergency protocols, sent personnel to the area, and will assist the victims as needed," the embassy tweeted.

Utah Gov. Gary Herbert thanked first responders for their work and sent a message to the victim's families.

"My heart sank when I heard the news that a tour bus crashed near Bryce Canyon. I grieve with all who lost loved ones in this crash and I'm grateful for the quick work of first responders, as well as all those who are volunteering to act as translators," he tweeted.

The wreck took place about 7 miles northwest of the entrance of the Bryce Canyon National Park. Bryce Canyon is about 250 miles south of Salt Lake City and just over 40 miles north of the Utah-Arizona border.

Utah's Highway 12 is considered one of the most varied and scenic drives in the country. It connects a number of national and state parks, including Bryce Canyon National Park and Red Canyon on the Dixie National Forest.