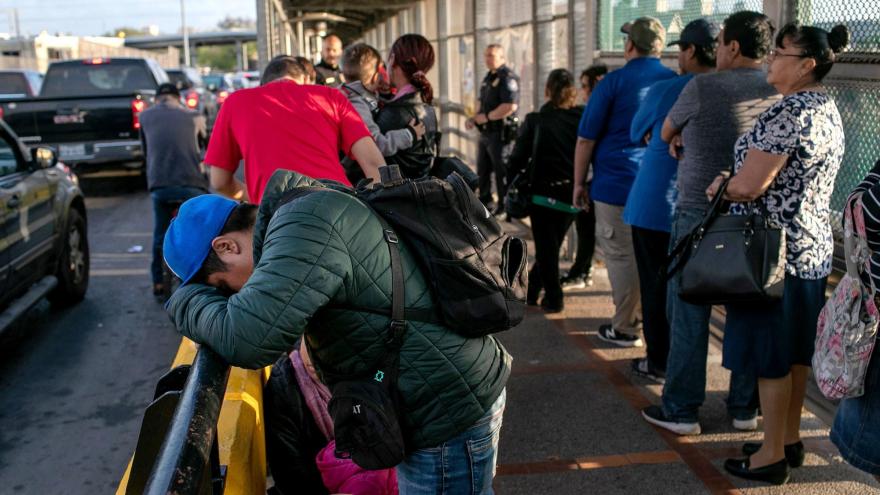 More than 300 migrant children who were previously waiting in Mexico with family as part of a Trump administration policy have crossed the US-Mexico border alone, marking a jump from the approximately 135 children who crossed last fall, the US Department of Health and Human Services told CNN.

(CNN) -- More than 300 migrant children who were previously waiting in Mexico with family as part of a Trump administration policy have crossed the US-Mexico border alone, marking a jump from the approximately 135 children who crossed last fall, the US Department of Health and Human Services told CNN.

Health and Human Services said that 352 children who "indicated that their family is in Mexico" had been referred to the Office of Refugee Resettlement, an office within HHS, between October 1 and January 13.

It's part of an ongoing trend of children, many of whom are from Central America, separating from their families after living in squalid and unsafe conditions in Mexico. Late last year, migrant families sent approximately 135 children across the US-Mexico border alone.

The administration's policy of returning migrants to Mexico to await their court date in the US does not apply to Mexican nationals.

The department provided the updated figure to congressional staffers on a call Thursday.

"In October, (Office of Refugee Resettlement) began to track referrals of children referred where there is any indication that their parents remained in Mexico as they entered the country unaccompanied," HHS said in the statement. "The primary reason for tracking this information is to ensure that parents and their children, in ORR care, are able to communicate and parents actively participate in the sponsorship process."

HHS cautions the figures are preliminary and is being reconciled with the Department of Homeland Security.

Nearly a year after the implementation of the administration's so-called "remain in Mexico" policy, the US has returned more than 57,000 migrants to Mexico. Administration officials argue the policy has helped stem the flow of migrants to the southern border.

But the perilous conditions many families find themselves in has resulted in children crossing the border alone despite initially arriving with a parent or relative.

The reasons behind why children believed to have previously fallen under the "remain in Mexico" policy have crossed alone vary -- from parents disappearing to relatives deciding the camps are too dangerous for children.

Unaccompanied children are exempt from the policy, which means children that cross the border are taken into custody by the Department of Homeland Security and referred to Health and Human Services. While in care, case managers work to place a child with a sponsor in the United States, like a parent or relative.

Two siblings -- a 4-year-old and 10-year-old from Honduras -- appeared at a port of entry on the border after their mother went missing, according to a source familiar with the cases.

The mother had gone to find chicken for the 10-year-old who insisted on having it for dinner but never returned, the source said. A friend at the camp where the family was staying took the brothers to a port of entry after the mother had been gone for a few days.

Their maternal aunt who lives in the US has indicated to case managers that the mother may be in a situation where she's being trafficked or extorted, the source said. Case managers are employed by shelters that work with HHS.

In another case, a 9-year-old boy woke up one morning and couldn't find his father. A local store owner directed him to the port of entry after the boy came asking for help, the source added.

"Every child deserves to remain with their family and we have a right to keep them together and protect them," the source said, adding that children often carry guilt for why their parents disappeared. "It's incredibly hard to see."

Human Rights First, an advocacy organization, has identified violent attacks against migrants who've been returned to Mexico in regular reports. In a newly-released report, the group found "at least 816 public reports" of murder torture, rape, kidnapping, among other attacks against asylum seekers and migrants waiting in Mexico.

Senior officials told acting Homeland Security Secretary Chad Wolf in a January memo that they were working on establishing and implementing measures regarding the number of parents or legal guardians returned to Mexico who "subsequently send minor children across the border to qualify as unaccompanied alien children."

The department did not return a request for comment on what steps were being taken.

A federal appeals court has allowed the policy to continue for the time being.