At least 30 wildfires have burned more than 30,000 acres in Oklahoma 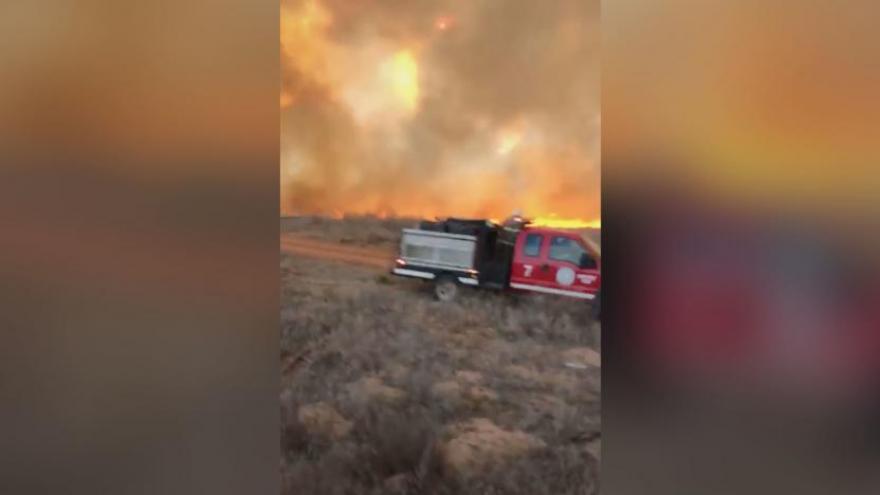 A still image from video posted by the Forgan, Oklahoma, fire department shows the scale of the flames.

(CNN) -- At least 30 wildfires have burned more than 30,000 acres in Oklahoma throughout the weekend.

Officials were still trying to determine how many buildings were lost or damaged in the fire, Michelle Finch-Walker with the Oklahoma Forestry Services told CNN Sunday.

The largest wildfire, dubbed the 412 Fire, has burned more than 29,000 acres in the state's panhandle, according to the Southern Area Coordination Center.

By Monday morning 50% of the 412 fire was contained, meaning half of the fire is surrounded by barriers that keep it from spreading at those points, the Oklahoma Forestry Service reported.

The 412 Fire started just before 1 p.m. Saturday, CNN affiliate KSNW reported, prompting officials to order evacuations in the towns of Beaver and Forgan in Beaver County.

A tweet from the National Weather Service in Amarillo, Texas, about a 160 miles southwest of Beaver, warned residents that homes were being threatened by the quick moving blaze.

There are about 5,000 residents in the county, according to the US Census Bureau.

A burn scar more than 15 miles long is visible on satellite images, NWS Amarillo said in a tweet Saturday.

Fires are not uncommon in the area during this month, CNN Meteorologist Michael Guy said. In Oklahoma, "March has the largest amount of acreage burned as well as comparable wildfires per month," Guy said.

High wind and low humidity in the area made for high fire risk Sunday and the small amount of rain expected Monday likely won't be enough to extinguish the flames, Guy explained.

"That weather system that caused the wind is pushing through right now -- the rain is not substantial with less than an ½ inch falling over the western portions of the state."