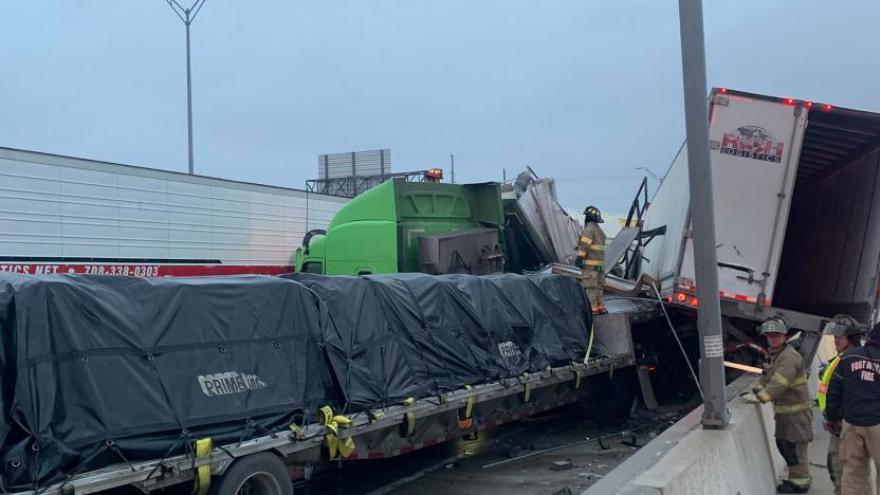 Police say, poor weather is a factor when at least 70 vehicles were involved in a crash in the Texas city of Fort Worth leaving at least three people dead.

(CNN) -- At least nine people have died in car crashes as of Thursday evening due to winter storms across the Dallas-Fort Worth area of Texas, according to a count by CNN.

A 133-car pileup on Interstate 35 West in Fort Worth on Thursday left at least six people dead, according to Fort Worth Police Chief Neil Noakes. The pileup was reported around 6 a.m. CT and spanned roughly a mile.

The incident was one of several reported in the Dallas-Fort Worth and Austin areas during dicey weather conditions Thursday that included freezing rain and accumulating ice.

There were at least three deaths in Dallas attributed to icy roads, according to crash information sent to CNN by Dallas Police Department spokeswoman Tamika Dameron.

One person died in an 18-vehicle crash on Julius Schepps Freeway around 11:15 p.m. Wednesday when a man was pinned against a retaining wall during the pileup, according to an incident report.

Less than two hours later and 3 miles down the road, a man was "driving at a high rate of speed" on the same icy freeway when he lost control and hit the median, according to an incident report of the crash. The driver and the passenger of that vehicle were pronounced dead at the scene and a third person who was in the back seat was taken to a hospital in critical condition, according to the report.

Authorities have not identified the victims in the Dallas crashes.

Numerous patients were treated and released on the scene, said Matt Zavadsky, spokesman for the MedStar ambulance service. While there were 65 patients who sought medical care, "that number is likely to continue to increase," Zavadsky added.

All victims on scene were adults, Zavadsky said.

Davis said 36 people were transported from the scene of the accident.

Also injured were four officers, three of whom were involved in the crash as they were heading to work. One was injured while working the scene, according to Noakes, the police chief.

Three victims taken to hospital in critical condition, Zavadsky said. Shelter buses arrived for victims who were not transported from the scene.

The pileup was over a 1.5-mile area, requiring multiple sectors to be set up including extrication, triage, treatment and transport, Davis said.

Many people were trapped in their vehicles, requiring hydraulic equipment to free them, according to Davis.

More than 80 police units responded, including the special events unit, which is meant to respond to large-scale incidents, he said.

Zavadsky said 13 ambulances were at the scene along with critical care paramedics and supervisor units.

"This is an incident that our agencies train for but hope and pray that never happens," Zavadsky said.

While the accident is under investigation, "ice was a factor," Noakes said. He could not say whether that area of the roadway had been treated for ice.

Areas of light freezing rain and some sleet were in the Dallas-Fort Worth area Thursday morning around the time of the wreck. About a tenth of an inch of ice accumulated just north of Fort Worth, the National Weather Service said.

The area was under a winter weather advisory until Thursday evening because of ice accumulation, which would result in "very slippery sidewalks, roads and bridges," the weather service said.

In Austin, roughly a 180-mile drive south of Fort Worth, five people were taken to hospitals because of a pileup involving 26 vehicles on State Highway 45 on Thursday morning, the Austin-Travis County Emergency Medical Services Department said.

Ice had been reported on an overpass where the wreck happened, department Capt. Darren Noak told CNN.