At least 263,000 customers without power as brutal winter storm slams parts of the US 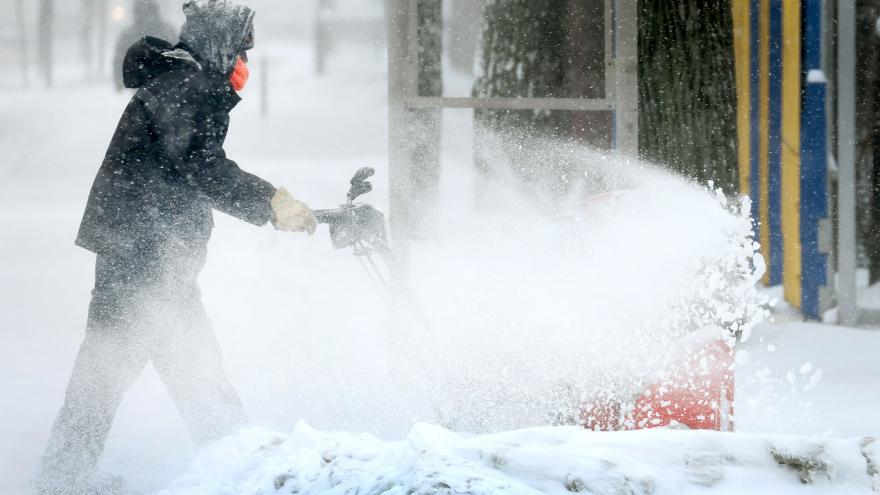 Editor's note: Caught in the path of the storm? Use CNN's lite site for low bandwidth.

(CNN) -- A triple whammy of sleet, snow and ice is bringing misery to millions across the US -- with many stuck in the huge winter storm without electricity.

The storm has already produced 2 feet of snow in parts of the Rockies and between 12 and 15 inches of snow across several Midwestern states. As of Thursday afternoon, snow was falling from the Southwest to New England, with additional snow expected into Friday.

Meantime, an ice storm is delivering dangerous conditions from Arkansas through Ohio. Over half an inch of ice accumulation could bring down trees and power lines, threatening access to power for large areas.

Many are already suffering that consequence. As of around noon ET, there were at least 263,000 customers without power across a massive swath of the US, according to Poweroutage.us.

The "significant winter storm is expected to impact much of the central and Northeastern U.S. through Friday night," said the National Weather Service's Weather Prediction Center.

More than 20 inches of snow had already piled up in the Colorado Springs area, the weather service said. Parts of Illinois and Indiana are buried under a foot of snow.

In Texas, the storm will test the state's power grid, which suffered catastrophic outages last February. The state said 246 people died -- most of them from hypothermia -- after a snow and ice storm left thousands of Texans without power for weeks.

Leaders of the state's power grid -- Electric Reliability Council of Texas, or ERCOT -- said Wednesday they believe they're prepared to handle the high demands during the storm but also warned there may be local outages due to ice on wires or fallen tree limbs.

Gov. Greg Abbott said in a briefing Thursday that the state's power grid has "plenty of power available at this time," calling the weather "one of the most significant icing events that we've had in the state of Texas in at least several decades."

"The power grid is performing very well at this time," he said. "At the expected peak demand, there should be about 10,000 megawatts of extra power capacity. To put that in context that is about enough extra power to supply about 2 million homes."

For Texans who have already lost power -- about 60,000 were without it early Thursday afternoon -- Abbott said the most probable cause was heavy winds affecting lines or icy conditions.

More than 10,000 linemen are already working to address power lines that aren't working, the governor said, with another 2,000 linemen coming from outside the state to help.

What 'several rounds of winter weather' will look like

As the storm system pushes farther east, forecasters say it will deliver a frigid mix of hazards.

"The system will be prolonged with several rounds of winter weather lasting through Friday for portions of the central U.S. before shifting to the interior Northeast," the weather service said Wednesday.

CNN meteorologists said these cities are among those under the gun:

"The combination of the volumes of snow, high winds, and frigid temperatures make travel near impossible in some areas of the state with several highways shutdown from vehicle crashes and jack-knifed semi-trucks," said Kevin Sur, spokesperson for the Illinois Emergency Management Agency.

In Springfield, a train crashed into a car that got stuck on the tracks due to snow Wednesday night. The driver -- the only person in the car-- was able to get out in time, Springfield police said. No injuries were reported.

Amtrak canceled multiple train routes Thursday in and out of Chicago, including the Cardinal Train 51 to New York. The route between St. Louis and Kansas City is also canceled, Amtrak said.

In Oklahoma, travel in most parts of the state "is strongly discouraged" the state's department of transportation said in a news release. Only two counties in the state remained unaffected as of Thursday morning, and portions of several interstates were closed, including I-40 and I-35.

The Missouri Department of Transportation also warned drivers that many roads across the state were covered with snow.

"Conditions remain hazardous ... Roads across the District are still covered with more snow expected through the morning," the MoDOT Central District tweeted.

The mammoth storm also snarled air travel Thursday, which is projected to be one of the 10 worst days for air travel over the past year.

Correction: A previous version of this story overstated the new February 2 snowfall record for Oklahoma City. The new record is 3 inches.