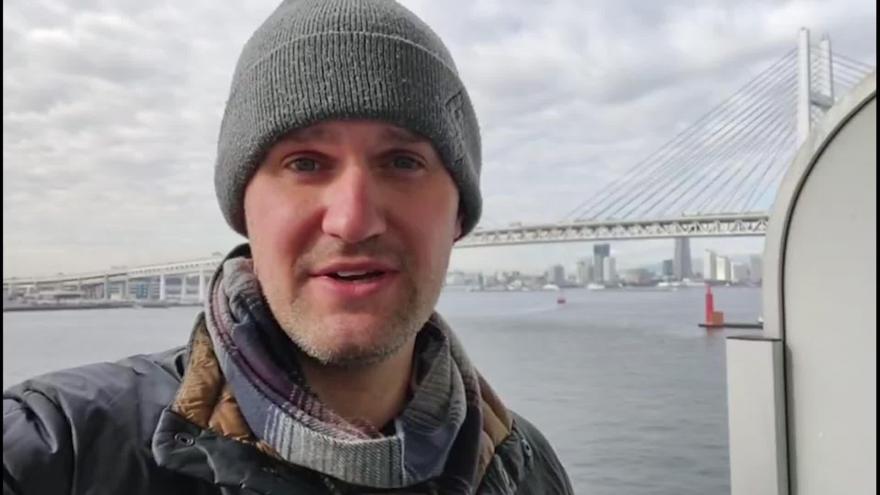 Spencer Fehrenbacher is under quarantine on a cruise ship in Yokohama, Japan.

(CNN) -- At least 24 Americans are among the 135 people infected with coronavirus aboard the Diamond Princess cruise ship in Yokohama, Princess Cruises said Monday, explaining it is using numbers from Japan's Health Ministry.

Princess has not released the nationalities for six patients who the cruise line said were added to the overall tally Sunday.

A growing number of people face 14-day quarantines as health officials around the world try to stem the tide of the outbreak, which has killed more than 900 people and infected more than 40,000 worldwide.

More than 3,000 people -- including 428 Americans -- are stuck on the cruise ship that became a floating quarantine zone after dozens of people tested positive for coronavirus.

Among them is Spencer Fehrenbacher, an American citizen and masters degree student in Tianjin, China, who wanted to celebrate Chinese New Year with his friends on the ship.

Now, he's confined to his cabin, spending his time reading and watching TV instead of enjoying all the amenities the ship has to offer.

Early in the week, Fehrenbacher said his mood was "pretty good." By the third day of quarantine, the ship's captain had laid out rules allowing passengers in interior cabins to get some fresh air, Fehrenbacher said. The passengers are allowed out for about an hour and a half, but have to wear masks at all times and stay one meter away from each other.

Rebecca Frasure and her husband, Kent, learned Friday that 41 additional people tested positive, she said in a video blog, "and come to find out that I was one of those 41 people." She had a slight cough, she said, but no other symptoms.

Footage filmed by Kent Frasure showed Japanese health officials at the door to their cabin, notifying Rebecca she would need to go to the hospital within the hour. Kent, who tested negative, couldn't come.

"I may be there for three days to I-don't-know-how-long," Frasure said. "I guess it depends on if I develop any further symptoms."

Newlyweds Milena Basso and Gaetano Cerullo are also on the ship, but instead of enjoying the honeymoon they'd planned for more than two years, they're worried about staying healthy and being trapped for longer than 14 days.

"We just don't feel like we're safe," Basso told CNN. "We should be quarantined in a sanitary environment that's safe, not on a cruise ship that's already infected."

Basso made a plea to US President Donald Trump: "Get us a government-based airplane. Get us off the ship."

American author Gay Courter, who is stuck in a cabin on the ship with her husband, Phil, said she's having nightmares about people she's been in contact with on the ship who may have been infected.

The Japanese government has said they can leave the ship on February 19, Courter said, but she's not optimistic.

"I'm not going to trust that statement, because so many more are getting sick," she said.

Watching ambulances come and go from her cabin's balcony and seeing people running around in hazmat suits, Courter told CNN's Erin Burnett it's "like I've landed in a B movie, and I can't wake up."

"I don't know what they're going to do with us," a weary Courter said. "Our wish, our fervent hope, is the United States government is working on a plan to get the 400 Americans out of here."