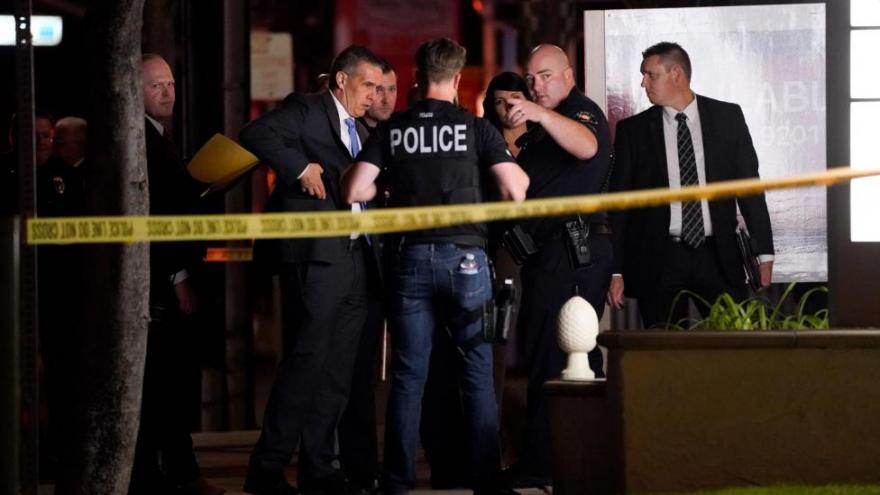 Investigators gather outside an office building where a shooting occurred in Orange, California, on March 31.

(CNN) -- Two weeks have passed since the three Atlanta-area spa shootings claimed the lives of eight people, and in that time at least 20 other mass shootings have taken place, from California to Washington, DC.

Analysis: A return to normal in America means a return to violence

At least seven mass shootings occurred in the week between the attacks in Atlanta and in a grocery store in Boulder, Colorado. In the week that followed, that number more than doubled.

CNN defines a mass shooting as a shooting incident that results in four or more casualties (dead or wounded), excluding the shooter(s).

Four people, including a child, were killed and another person wounded in a mass shooting at an office complex in Orange, California, according to authorities.

Five people were shot in Washington, the DC Police Department said. The incident started as a dispute and ended with two people dead and three injured.

Seven people were shot at a Cleveland nightclub, according to CNN affiliate WOIO. The victims, four men and three women, were all between 20 and 30 years old, and police believe several people fired inside the nightclub, the station reported.

Four people in an SUV were shot on the I-57 expressway, according to CNN affiliate WLS. All were taken to hospitals in critical condition.

Four people were shot in Chicago's South Austin neighborhood, according to CNN affiliate WBBM. The victims, which included men ages 42, 53 and 64, were near a sidewalk when they were shot, the station reported.

At least seven people were injured in a mass shooting at a nightclub, CNN affiliate WLBT reported. At least six people were shot and another person suffered a laceration, the station reported.

A shooting on a party bus left three people injured and one dead, according to CNN affiliate WLS. Police say the occupants of another vehicle fired at the bus while stopped at an intersection, the station reported.

Three shootings in the city left eight people injured and two dead, according to the City of Virginia Beach. Officers responded to shots fired and found the eight victims, who were transported to local hospitals with gunshot wounds ranging from serious to life-threatening. Officers heard additional gunshots nearby and found a female victim who died of injuries from gunshot wounds.

The suspected gunman succumbed to his wounds after a related officer-involved shooting, the city said.

A gathering in Chicago's Wrightwood neighborhood turned into a mass shooting, according to CNN affiliate WLS. Two gunmen opened fire inside the gathering, wounding seven people and fatally shooting a 26-year-old man, the station reported.

Michael Tucker, the man identified as the suspect, was found dead in a motel in Nashville Thursday. Police spokesman Don Aaron said it is believed Tucker died of a self-inflicted gunshot wound.

A shooting reported at an Aliceville home left two people dead and two injured, according to CNN affiliate WVTM.

Ten people, including a Boulder police officer, were killed in a shooting at a King Soopers supermarket, according to police.

One person was killed and another five were injured in a shooting at an illegal party, CNN affiliate KYW reported. "There were at least 150 people in there that fled and believed they had to flee for their lives," Philadelphia Police Commissioner Danielle Outlaw said.

Eight people were shot, one fatally, by an unknown assailant, according to police.

Five people were shot after a disturbance inside a club, according to police. One was in critical condition after being shot in the neck, and the rest were in stable condition, according to CNN affiliate KPRC.

Four victims were taken to the hospital after a shooting in the city east of Portland, police said in an initial report.

Five people who were preparing a vigil in Stockton, in California's Central Valley, were shot in a drive-by shooting, the San Joaquin Sheriff's Department said. None had life-threatening injuries.