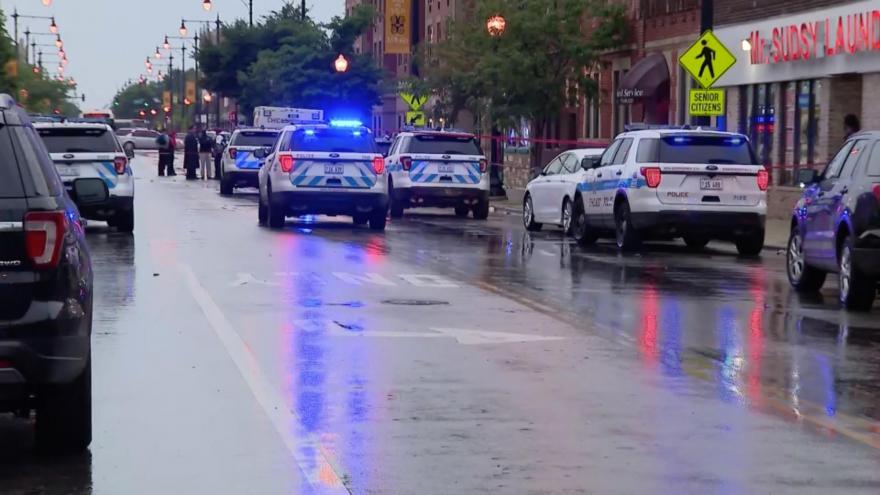 At least 14 people were injured in a shoot-out at a funeral Tuesday evening, police said.

"We can't keep meting out violence with violence," Brown said. "An eye for an eye makes us both blind. It's destroying our families and perpetuates this endless cycle of gunshot victims night after night."

Two of the people shot at the funeral are men "known to police," Chicago Police said. Both are in their 30s and are listed in serious condition, said CPD.

Of the injured, all of whom are adults, 14 were hospitalized. One person is in extremely critical condition and another is in critical condition, according to police. Police say the others who were injured in this shooting are expected to recover.

The oldest victim, a 65-year-old woman, was treated on scene and is in good condition, police said. There is a person of interest being questioned by police, CPD said.

The shooting is just the latest in a spate of gun violence in Chicago and in major cities across the United States in the past few months that coincide with the end of Covid-19-related lockdowns, mass protests against police violence and summertime, when crime annually increases.

On Monday in Chicago, 25 people were shot, and over the weekend, 63 were shot and at least 12 people were killed.

Gun violence has particularly increased in the past month. In the 28 days before July 19, there were 116 murders in Chicago, nearly triple during the same period in 2019, according to Chicago Police.

Despite the rise in gun violence, non-firearm related crimes have remained flat or decreased on the year. Overall, crime complaints are down 9% this year compared to last year, led by sharp declines in theft and criminal sexual assault, according to Chicago Police.

Brown, the police superintendent, said the violence Chicago has seen this year is tied to gangs and their conflicts externally and internally.

"This is about gangs, guns and drugs," Brown said. "Many of the retaliations, the murders, the initial murder, it likely is about some beef between a gang or another gang, external or internal, and or having to do with the drug market."

President Donald Trump said Monday he plans to send federal law enforcement to certain cities, including Chicago, "all run by very liberal Democrats," to try to crack down on the violence. A senior law enforcement official told CNN that there are plans to send federal agents to Chicago through the end of the summer. The agents will focus on illegal gun sales and gun violence and outstanding warrants, among other targets, according to a source.

Chicago Mayor Lori Lightfoot said the government could help by cracking down on illegal guns, but she warned against the type of involvement seen in Portland, Oregon, where federal law enforcement's presence and aggressive tactics have exacerbated protests.

Car used in shooting was stolen

Some at the funeral began to fire back, he said. The vehicle then struck a parked car and came to a stop, and its occupants got out and fled, according to police.

Chicago Police Chief of Detectives Brendan Deenihan said that the car used in the shooting was stolen and that the three occupants, including two suspected shooters, fled on foot. Officers have recovered at least 60 shell casings at the scene and are currently looking for more witnesses.

"This can't happen," Deenihan said as he urged witnesses to come forward. "You can't drive down the street and indiscriminately shoot in to a crowd of people and then flee the scene."

Brown said there were two squad cars at the scene for the funeral and a full tactical team in the area. He said the intelligence prior to the funeral showed that there was a gang connection to the shooting of the man who was being mourned, who was killed in a drive-by shooting.

The funeral was for a person who was shot due to a gang conflict, and his murder is related to a prior shooting, Deenihan said.

"This is an ongoing gang conflict where individuals are shooting at each other, and obviously those individuals then have no interest in cooperating with police," Deenihan said.