At a teen's funeral, a priest condemned suicide and 'basically called our son a sinner,' mother says 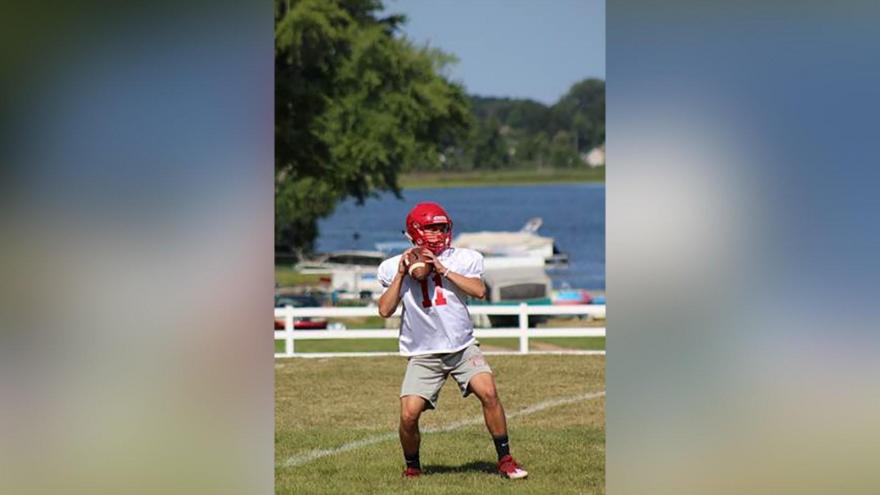 Maison Hullibarger was a straight-A student and a freshman at the University of Toledo, his family said. The 18-year-old took his own life.

(CNN) -- Grieving the most tragic loss two parents could endure, Jeff and Linda Hullibarger expected comfort from a priest's homily at their son Maison's funeral.

Instead, the priest lectured the hundreds of mourners that suicide is wrong, and repeatedly referenced the 18-year-old taking his own life.

"I looked at Jeff and thought, 'What is he doing?' " Linda Hullibarger said Sunday.

"We have five other kids. Nobody could believe it," Jeff Hullibarger said. "I looked at the parish, and everyone had the same look on their faces."

"After the first few times that he said that word [suicide], I approached the pulpit and I told him, I whispered in his ear, 'Father, please stop.' "

"He didn't miss a beat. He kept going," Jeff said. "He said that word another handful of times. It made the worst day of our lives more worse."

Veering off the plan

The Hullibargers barely had time to process their son's December 4 death when they met with the Rev. Don LaCuesta to discuss what they wanted in the homily, to be delivered at Our Lady of Mount Carmel Catholic Church in Temperance.

But once the priest started speaking at the December 8 funeral, "Not one word out of his mouth was about what we asked and what we talked about," Jeff said. "It was unprofessional and unacceptable."

LaCuesta had not responded to CNN's request for comment Sunday. But the Archdiocese of Detroit apologized to the Hullibarger family.

"We understand that an unbearable situation was made even more difficult, and we are sorry," the archdiocese said in a statement.

It said the priest will not be preaching at funerals for the foreseeable future, and "he will have all other homilies reviewed by a priest mentor."

"In addition, he has agreed to pursue the assistance he needs in order to become a more effective minister in these difficult situations," the archdiocese said.

"This assistance will involve getting help from professionals -- on human, spiritual and pastoral levels -- to probe how and why he failed to effectively address the grief of the family in crisis."

What the priest said

According to a copy of the homily, LaCuesta said, "God can forgive even the taking of one's own life. In fact, God awaits us with his mercy, with ever open arms. ... Yes, because of his mercy, God can forgive suicide and heal what has been broken."

But he also said "we must not call what is bad good, what is wrong right. Because we are Christians, we must say what we know is the truth -- that taking your own life is against God who made us and against everyone who loves us. Our lives are not our own. They are not ours to do with as we please. God gave us life, and we are to be good stewards of that gift for as long as God permits."

The priest also spoke about the consequences of suicide.

"The finality of suicide makes this all the worse," LaCuesta said. "... Now you will have to work through this pain by yourselves, or with those close to you now who will need to lean on you even as you lean on them."

Maison's mother said she had no idea the priest would deliver a homily so drastically different from what the family discussed.

"He basically called our son a sinner in front of everyone," Linda Hullibarger said. "We had no idea that he was going to do this. ... We've been lifelong members of the church."

The archdiocese said LaCuesta was trying to offer a message of confidence in salvation.

"We acknowledge, however, that the family wanted a homily based on how their loved one lived, not one addressing how he passed away," the archdiocese said.

"We also know the family was hurt further by Father's choice to share church teaching on suicide, when the emphasis should have been placed more on God's closeness to those who mourn."

'He was just an unbelievable son'

After LaCuesta's homily, the priest was supposed to turn the floor over to the parents to deliver their remarks, Jeff Hullibarger said.

But the priest didn't let the parents speak. Instead, "he proceeded to end the funeral, and the music started," Linda Hullibarger said. "We had to stop the funeral director because everyone just stood up."

The funeral director stopped the music, and the parents were able to honor their son the way they wanted him to be remembered.

"We would like to celebrate the life of Maison today," the parents said. "He has had a great impact on the lives of many people. Passionate and opinionated, that's what we loved about him.

"Our family's message for you today: Please be kind to one another. Reach out to those you care about. Show sincerity in your actions. And love forever, unconditionally."

The public is now taking those messages to heart -- and acting on them.

The Hullibargers' GoFundMe page, which was established before the funeral, listed a goal of $10,000 to help pay for Maison's funeral and burial expenses.

By Sunday afternoon, donors had contributed more than $20,000.

The Hullibargers said they're grateful for the outpouring of support. But they said their reason for speaking out is because they want LaCuesta to be dismissed, so no other family will suffer the way they did.

"We're supposed to have a meeting with the archbishop," Jeff Hullibarger said. "We're trying to set that up now. It may be difficult but I think it's something my wife and I have to do."

"We just don't feel that the consequences are where they need to be right now. We asked him [the archbishop] to remove the priest from the priesthood. We're wondering how they think that sending him to the classroom- how that's going to teach him empathy and to have some discretion. How do you teach somebody that?"

They also want to make sure the funeral doesn't overshadow the joy that Maison brought to his loved ones.

"Maison is a great person. He's a very caring person," his mother said. "We had numerous students come up to us and tell us how in their time of need he was there for them. ... He was just an unbelievable son."