At 95, Jimmy Carter is still living his faith through service 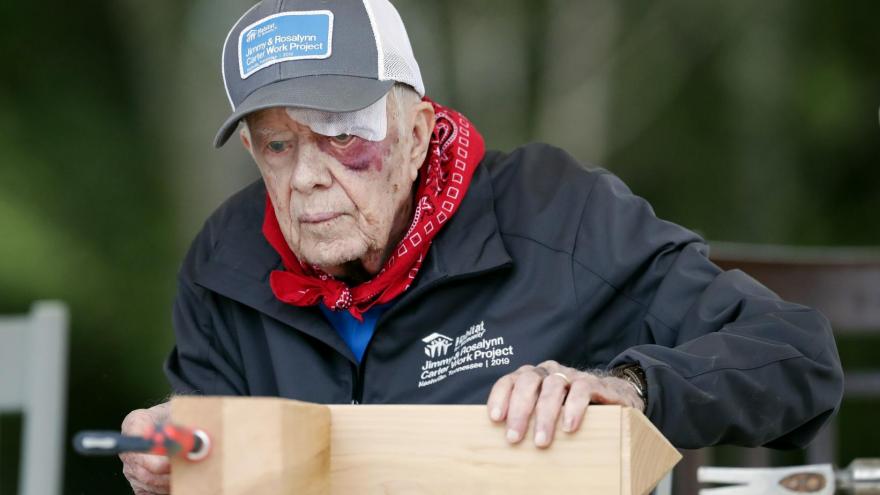 The Carter Work Project origin story begins with a run in Manhattan.

The former president stands underneath a tent on a muddy lot on a recent rainy morning constructing corbels, a support structure made by gluing, drilling and nailing three pieces of wood together. His wife, former first lady Rosalynn Carter, stands a few feet away, painting them white.

There's a designated area behind a white picket fence for press to watch as he works. Local news crews assemble, but after a while, they've got the material they need for their evening programs and move on to get other footage.

The Carters are here in Nashville for the weeklong 36th Jimmy and Rosalynn Carter Work Project with Habitat for Humanity. They have built, renovated or repaired more than 4,300 homes alongside more than 100,000 volunteers across 14 countries.

The week spent in Nashville is a scene of joy and sweat and tears, muddy boots and muddy faces. There's a spirit of togetherness and it's largely a politics-free zone, about as far as you can get from the bitter partisanship of Washington. Carter politely declined to answer a question about President Donald Trump and impeachment during a news conference.

Carter, who wears work boots, jeans, the same blue T-shirt given to all of the volunteers, and a red bandanna around his neck, stands out among the volunteers only in age. The oldest living former president celebrated his 95th birthday earlier this month, and though he's physically frail, he's sharp as a tack.

He also has a bandage above his brow and a visibly black eye, the result of a fall while getting ready for church Sunday morning that required 14 stitches. Undeterred, he traveled to Nashville that afternoon anyway.

"I had a number one priority and that was to come to Nashville and build houses," he told a crowd of volunteers Sunday evening at Ryman Auditorium.

The only other sign that he's any different from the other 1,000-plus volunteers on the build site is the quiet presence of Secret Service, who come to his aid only when he unexpectedly falls, nimbly help him up, and later suggest that he sit in one of the many chairs provided.

Carter looks up at one point and waves, and I ask how he's doing.

"Fine, so far! Haven't hurt anything," he says, his sense of humor intact.

It's a testament to his remarkable legacy of service and faith in his post-presidency. It's a story of service, stamina and love -- an American story.

The Carter Work Project origin story begins with a run in Manhattan.

Habitat for Humanity was founded in Americus, Georgia, in 1976, just about 10 miles from the Carters' home in Plains, Georgia, where they have lived since leaving the White House in 1981. Carter had been asked to get involved with the organization and had volunteered casually, but it wasn't until he was in New York City for meetings and out on a run on the Lower East Side that the Carter Work Project seed was planted.

"He ran by a group of students struggling to do a Habitat project, and he just made a comment, 'We need to do something to help these students,' " Habitat for Humanity International CEO Jonathan Reckford told CNN.

Soon after, Reckford said, the Carters took a bus ride back to Manhattan "with a boatload of folks from South Georgia" and worked on the Mascot Flats apartment building, the inaugural 1984 Carter Work Project, for a week. The volunteers -- including the former first couple -- slept on the floor of a local church basement each night. The Carters had been offered a small room at the church, which they gave up to a young couple who had skipped their honeymoon to attend the build.

That first trip, Reckford said, put the organization on the map.

"That's when the world found out about Habitat for Humanity," he said.

Since 1984, Carter Work Project has taken the former first couple across the United States and around the globe to 14 countries, from Milwaukee, Wisconsin, to Eagle Butte, South Dakota, to Hungary to the Philippines.

Next year, Carter said in an interview with CNN, the work will continue.

"We're going to go to the Dominican Republic next year in the year 2020," he said.

Cutting back with the Carters

Rosalynn Carter has been ever-present by her husband's side at the annual project. The two have been married nearly 74 years, their intense bond palpable.

The key to that successful marriage, the former President told reporters on Monday, is to "give each other plenty of space to do our own things and try to find things that we like to do together."

Among those adventures together: taking up downhill skiing at 62 and 59 years old, respectively, birdwatching, tennis, fly fishing, building Habitat houses and spending time with their family, which now includes four children, 12 grandchildren, and -- they think -- 14 great-grandchildren, including two babies born in recent months.

The two maintain an active lifestyle despite health issues over the years. They were both hospitalized in the spring -- Jimmy Carter for hip surgery after a fall on his way to go turkey hunting and Rosalynn Carter taken in for observation and testing after feeling faint days later. The former president also fought cancer in his liver and brain, announcing his cancer was gone in 2015.

"We've cut back in the last few months. I'm 92, he's 95, and we thought it was time to stop working steadily all day every day," Rosalynn Carter told reporters Monday. But they still maintain a busy schedule, she said, traveling to Atlanta monthly to spend time at the Carter Center.

Since leaving office, Carter has led a life of public service. The Carter Center's initiatives include monitoring international elections, fighting diseases in developing countries and seeking international peace. Carter traveled to Cuba in 2002 to outline his vision for improving US-Cuba trade relations. He met with Hamas leaders in Egypt in 2008. In 2010, he negotiated the release of a US citizen imprisoned in North Korea with Kim Jong Il. He's spoken to Trump about China trade negotiations.

There was no sign this week that the couple, who both walked with canes, had any intention of scaling back their work on the build site. Rosalynn Carter said it was important that each of the homes constructed this week "will have something we built."

"I'll stop when I have to. But I won't stop until I have to," Jimmy Carter told CNN.

The former president had a similar attitude in a New York Times dispatch from that first project in New York as he did here in Nashville at the 36th.

Asked Monday why, after all these years, they still make the effort to do the work, Carter simply said: "We've always gotten more out of it, our Habitat work, than we put into it."

He added: "We have a net gain when we come to a Habitat project. There's always an emotional feeling among the volunteers and the homeowners, kind of binding us together in a spirit of love, appreciation, and mutual respect, and also equality ... Treat everybody the same and try to help people that are in need."

Jimmy Carter still teaches Sunday School twice a month at Maranatha Baptist Church, people coming to Plains from around the world to hear his lessons. On Monday, Carter led a morning devotion for the Nashville volunteers before the building began.

He sat in a chair on a small platform and led the hard hat-clad audience through some questions.

"A decision only you can decide: What kind of person so far in my life have I chosen to be? If you're not satisfied at any time, you can change. Every person ... can be a complete success in the eyes of God," he said.

"One of the best ways to practice my faith as a Christian is to participate in Habitat every year," Carter said.

Nashville, which has experienced significant growth and gentrification in recent years, is facing a crisis of affordable, available housing for working families, according to Danny Herron, Habitat for Humanity of Greater Nashville's president and CEO. At the end of the weeklong Carter Work Project, 21 brand new Nashville homes will be more than halfway complete, the work continuing in the coming weeks, with most of the families moving in by the beginning of 2020.

The folks at Habitat like to say that it's "a hand up, not a hand out."

Families pay zero down and get 100% financing, but pay a monthly 30-year mortgage, Herron said. In addition to closing costs, recipients of Habitat homes are asked to pay in sweat equity -- they are right there with the volunteers all week.

Tara Morgan, 31, will be moving into the first home of her own with her 9-year-old daughter just before Christmas. She played the role of "catcher" on Monday.

"I stand on the floor and I catch the walls and I position them. That's my job right now, holding up walls. I looked over and I saw my neighbor doing the same thing. How crazy is this? That I'm watching my neighbor build her house the same time I build mine," she said.

This week with Carter Work Project means more than a roof over her head.

"I can truly be a backbone for my daughter," she said. "This is the beginning of -- this is mine and this is what I can provide or my daughter, this is ours. That stability, that independence, finally, it just means everything."

Morgan said she didn't believe it when she was chosen by Habitat as one of the 21 future homeowners.

"A part of me is wanting to say, like, why, what about me? And in that moment, I just have to stop and say, 'God, I asked for a change in my life and now it's coming, so let me just walk in. Let me just realize that if I'm chosen, it's because I'm worthy and I deserve it.' So I just said, 'Thank you, I'm ready, tell me what I gotta do,' " she said.

Carter constructed his corbels in Morgan's future front yard as she and volunteers took the home from a poured slab of concrete to a fully framed house within hours.

By the end of the week, the roof was up.

"It's things like this that gives me this overwhelming feeling of hope. This is what I want to fill my head up with in the morning. For him, as a former president to still be doing this work -- he's a great example. I wasn't alive when he was president, but I'm so grateful that he's alive, to see him and for my daughter to meet him," she said.

In this world, far removed from Washington, people's political affiliation seems to melt away.

Also among the volunteers: the "first couple" of country music, Garth Brooks and Trisha Yearwood, who met the Carters while building post-Hurricane Katrina homes in New Orleans and have now participated in 12 Carter Work Projects.

"We look forward to this every year," Brooks said. "It's the week of love."