Astronauts really just took Baby Yoda with them up to space 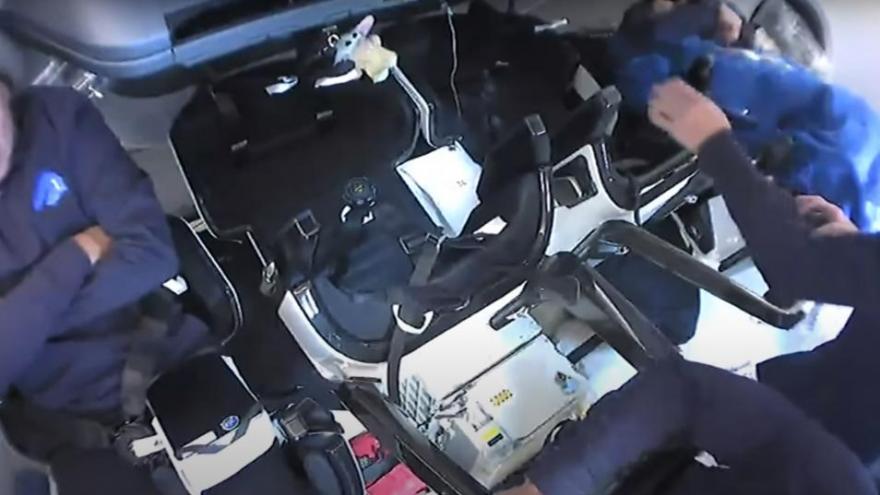 The plush Baby Yoda (top middle) can be seen in a live stream from inside SpaceX's Crew Dragon.

(CNN) -- Baby Yoda became an honorary astronaut over the weekend.

A plush toy version of the creature -- which stole people's hearts in Disney+'s Star Wars series "The Mandalorian" -- can be seen in a live stream from inside SpaceX's Crew Dragon.

In the video, Baby Yoda is spotted bouncing around alongside astronauts Michael Hopkins, Victor Glover, Shannon Walker and Soichi Noguchi. The four astronauts on Sunday became part the second-ever crewed flight of a SpaceX spacecraft. The first Crew Dragon to launch humans, which was still considered a test mission, took off in May.

It's not the first time SpaceX astronauts have brought a plush friend with them on board. Such objects are often used as chosen zero-gravity indicators, according to The Verge.

In March of 2019, Elon Musk -- SpaceX CEO -- tweeted an image of a test launch featuring an Earth-shaped toy.

"Super high tech zero-g indicator added just before launch!" he wrote in the tweet, adding in a response to another user that the plush toy was "going to float around in zero gravity."

In May 2020, astronauts Bob Behnken and Doug Hurley also brought a toy with them on board: A stuffed dinosaur, The Verge reported.

SpaceX did not immediately respond to CNN's request for comment regarding Baby Yoda's presence on the spacecraft.

Baby Yoda and the crew are expected to dock with the ISS around 11 p.m. ET on Monday, after a 27-hour journey.