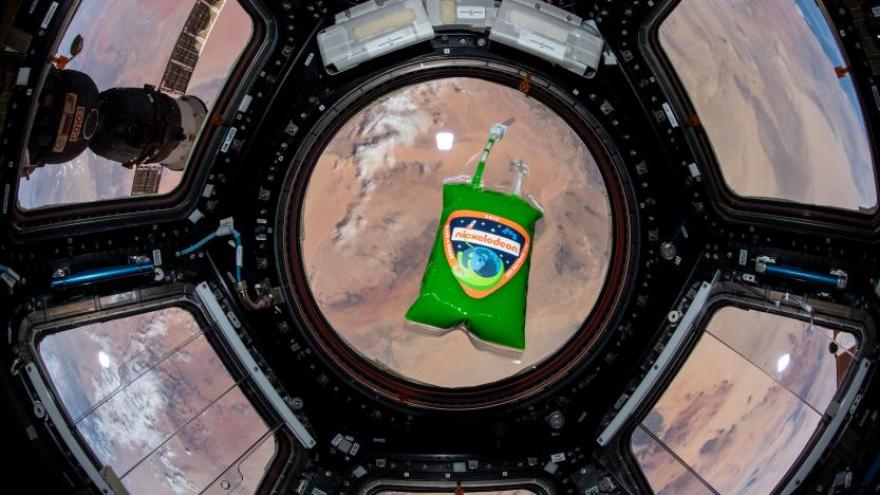 Even though things got as messy as can be expected, the biggest surprise of all was the strange and fascinating ways that Nickelodeon's famous green goo reacted in the absence of gravity.

(CNN) -- In a first for humans in space, NASA astronauts Christina Koch and Andrew Morgan and European Space Agency astronaut Luca Parmitano got slimed on the International Space Station — all in the name of science.

Even though things got as messy as can be expected, the biggest surprise of all was the strange and fascinating ways that Nickelodeon's famous green goo reacted in the absence of gravity.

The results of the experiment could have implications for handling liquids in space, including processing carbon dioxide and wastewater, watering plants grown on the space station and even life support systems on future deep space missions.

During her record-breaking 328 days in space, Koch worked on a vast variety of scientific experiments on the space station, including fire dynamics in space, plant biology and research that could benefit human health.

Koch has childhood memories of watching people get slimed on reruns of "You Can't Do That on Television" on Nickelodeon, but she never imagined she would be testing out the dynamics of slime in space.

While Koch and her fellow astronauts had fun with the slime, they were also surprised by the scientific observations they made during the activities.

"It's not often for your job on the space station that you're given a couple of hours to play with slime, with the ground teams directing you to shoot your friend with slime from a syringe or fill a balloon with slime," Koch told CNN.

"My favorite thing about that experiment is that it highlighted the concept of curiosity leading to discovery. This is discovery-based science. It's why we seek knowledge."

On Earth, liquids are governed by gravity. But in space and the absence of gravity, bubbles don't rise, droplets don't fall, and liquid doesn't flow the way we're used to observing them on our home turf.

Think about a simple factor of your morning routine, such as pouring a cup of coffee. In space, you can't pour coffee into a cup, and you can't drink coffee from a cup because the coffee wouldn't slide out of the cup and down your throat.

But a coffee cup designed to function in the absence of gravity can help, based on 2012 experiments conducted by astronaut Don Pettit on the space station with direction from Mark Weislogel, Portland State University professor in the department of mechanical and materials engineering.

Weislogel has a long history of conducting fluid experiments on the space station. So when Nickelodeon said they wanted to send slime to space, they worked with Weislogel and Rihana Mungin, a Portland State University mechanical engineering graduate research assistant.

Slime is considered a non-Newtonian fluid, which means that its viscosity changes in reaction to different forces.

Compared to water, slime is 20,000 times more viscous, or thicker, because it's a polymer substance that's part solid, part liquid. When the force of gravity is no longer acting on water, surface tension (the force on the surface of a liquid that causes it to act elastically) takes over.

Weislogel and Mungin designed the experiments the astronauts would conduct in space for Nickelodeon's Slime in Space project.

The slime experiment is an example of fluid dynamics, with eight different demonstrations to showcase the properties of slime in the absence of gravity. A set of hydrophobic paddles, or paddles with water-repellent coating, were also sent along with the slime.

"Interestingly, we define liquid on Earth as something that takes the shape of its container," Koch said. "Water just turns into a sphere in microgravity, so we've had to remake definitions of different kinds of matter in space. This experiment is a great demonstration of how microgravity can contribute to our understanding of things on Earth, especially the things we take for granted."

Slime has never been to the space station, so the astronauts tested it in a variety of ways. And they had fun doing it.

They started by releasing a similar amount of slime and water into the gallery. Both formed floating blobs, which the astronauts then tried to spin. While the wobbly water blob spun continuously unless it was interrupted by the paddle, the slime actually stretched out into a solid-looking oblong shape and rotated. It sprang back to a sphere when the rotation was stopped.

They also used dental floss in an attempt to cut the slime, which didn't work, and pumped air into a slime blob to create a slime bubble.

Koch expected to be slimed again when slime-filled balloons were popped. The balloons peeled back, but the slime maintained its shape as if it were still cocooned by the balloon. Perhaps the biggest surprise occurred when Parmitano put slime on the paddles. The slime appeared to stick to the paddle despite its water-repllent coating, and he created 3D waves in the slime by moving the paddle up and down.

Then, without being directed to, Parmitano brought two slime-coated paddles together. When he pulled them apart, a long "liquid bridge" of slime formed, then broke into five perfectly placed satellite droplets, Mungin said.

This is something Mungin once saw in Weislogel's class, but on a tiny scale within a thousandth of a second beneath a microscope.

"We were able to see that exact phenomenon with this large and bright liquid in free-floating space," Mungin said.

They hung a shower curtain in the galley to keep slime from getting all over the space station, but it still took them an hour to clean up after the experiments were over. Slime is designed to make a mess and cover everything, but luckily, they could capture the floating blobs.

In the footage of the experiments, the researchers could study what they call the viscous limit, a benchmark for liquid analysis. The results of the experiments will be published in journals and used when studying liquids on Earth, as well as designing future experiments for the space station.

Slime acts as an analog for other liquids on the space station because if a droplet is small enough, it will act like slime, Weislogel said. And slime is safe, without posing a risk to the astronauts, so they could handle it in the open cabin, Mungin said.

Future experiments on the space station could involve tabletop experiments, rather than being contained in boxes. Understanding how liquids and droplets behave in the open cabin is key to safely carrying out those experiments.

"When gravity is small, our intuition stalls when it comes to liquids in space," Weislogel said. "Without bubbles rising and droplets falling, most of our fluid systems we design for life on Earth don't work."

And if systems dependent on liquids in space fail, it would be more difficult to fix them the farther out missions travel away from Earth. Experiments on the space station involving liquids are critical to pushing technology ahead.

"We have so much to learn in terms of intuition, to build intuition, because we're so used to making spherical tanks and round tubes," Weislogel said. "In space, that's not the way forward."

Weislogel envisioned pump-less systems where liquid moves based on the shape and size of containers, like fuel depots that can orbit the moon and transfer propellant to a spacecraft without a pump. Watering plants on the space station also requires crew intervention, but Weislogel would love to see a system that can grow plants autonomously.

The space station is unique in that it doesn't focus on one kind of science, but what it can offer is something that other labs can't — withholding gravity as a variable, Koch said. And the space environment provides a wide spectrum of discovery, she said.

Experiments on the space station have another power: inspiration, especially for kids.

Nickelodeon created "A Virtual Field Trip," a video that showcases demonstrations on the space station with slime, as well as experiments with slime on Earth conducted by Mungin and a group of young students. They have also provided related activities for kids to do at home.

"It's such a unique experience," Mungin said. "It was pure joy sending slime to space and then getting to come back to it by doing experiments with kids who had the same excitement level as mine. The ultimate science can have such an impact on kids looking to go into STEM."

Especially during this unique time as the pandemic keeps students at home and out of their traditional classrooms, Koch hopes that the slime experiments cause kids to look around their homes and environment and ask new questions and "bring their curiosity" to each thing they encounter.

Koch's curiosity, dreams and hard work led her to become an electrical engineer and an astronaut.

"There's trepidation to dream too big," Koch said. "Even if you're thinking about something that seems too lofty, it isn't out of reach."