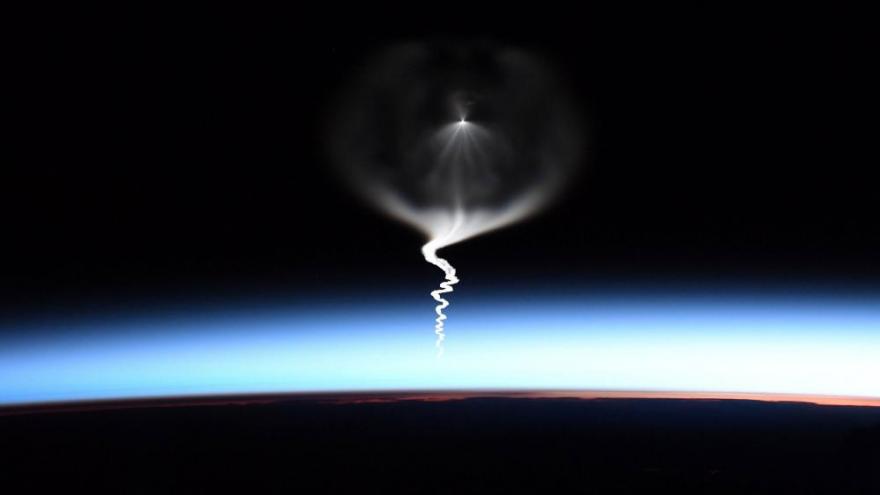 This is the jaw-dropping picture that NASA astronaut Christina Koch snapped Wednesday from her privileged position at the International Space Station (ISS).

(CNN) -- Sinuous smoke soars above the Earth's atmosphere while a bright star - actually a Russian Soyuz rocket - stands against the dark night sky, encircled by a ring.

This is the jaw-dropping picture that NASA astronaut Christina Koch snapped Wednesday from her privileged position at the International Space Station (ISS).

On board the ISS-bound spacecraft Soyuz MS-15 (Expedition 61), which launched from Baikonur Cosmodrome in Kazakhstan, was her best friend, NASA flight engineer Jessica Meir. Traveling with Meir were Oleg Skripochka, from the Roscosmos (Russian space agency), and Hazzaa Ali Almansoori, the first United Arab Emirates (UAE) astronaut to go into space.

As explained by Koch in her tweet, the incredible photo shows the second stage trajectory in progress, while the wiggly smoke is a remnant of the liftoff.

Pictures from people on the ground in Kazakhstan also show the uncanny shape the rocket's path took while on its way to the ISS.

Koch, who is not new to snapping great photographs of space, decreased the exposure on her camera to capture the peculiar visual effect. This is also why no stars are visible, as noticed by others in the comments.

The Soyuz docked correctly to the ISS at 3:42 p.m. EDT on the same day of the launch.

During their expedition, Meir and other crew members will install new lithium-ion batteries for two of the station's solar array power channels through a series of spacewalks, according to NASA.

Almansoori will spend only eight days at the ISS before he returns to Earth. The launch marked the last time the Gagarin's Start, the launch pad where Yuri Gagarin lifted off on April 12, 1961, to become the first human to fly into space, was used before an upgrade.