Gunman who killed 4 at Oklahoma medical building had been a patient of a victim, police chief says 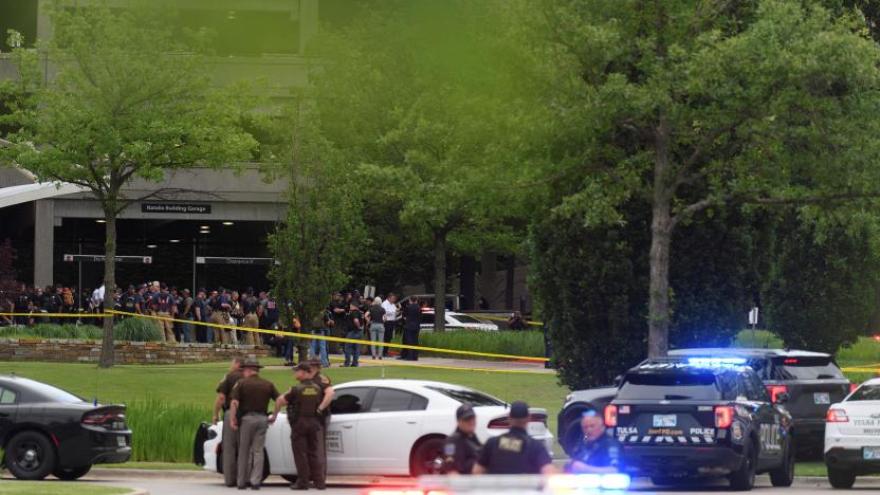 Four people were killed in Tulsa on June 1 after a gunman -- who was later found dead -- opened fire on the second floor of a medical building, authorities in Oklahoma said.

(CNN) -- The gunman who killed two doctors and two others at an Oklahoma medical building Wednesday did so after he blamed one of the physicians for causing him pain from a recent back surgery, a police chief said Thursday.

The shooter, Michael Louis, who police said killed himself after the rampage in Tulsa, had just earlier that afternoon legally purchased one of the firearms used in the slaughter, an AR-15 style rifle, city Police Chief Wendell Franklin said during a news conference.

Officers found a letter on Louis that "made it clear that he came in with the intent to kill Dr. Phillips and anyone who got in his way," Franklin said.

The others, Franklin said, just "stood in the way, and Louis gunned them down."

An unspecified number of other people were injured in the shooting, which happened in orthopedic offices of the Warren Clinic on the building's second floor, officials said at Thursday's news conference.

Officials declined to say whether the injuries to those people were caused by gunshots or attempts to flee the violence; authorities had earlier said that fewer than 10 people had non-life-threatening injuries.

The Warren Clinic is a series of primary and specialty care offices within the Saint Francis system.

The mass shooting is among the latest instances nationwide of first responders and civilians coming face-to-face with the threat of gun violence in public places. It comes more than two weeks after a racist assault at a supermarket in Buffalo, New York, and a bloody attack at a church in California; and eight days after a heartbreaking massacre at an elementary school in Uvalde, Texas.

The Tulsa shooting is one of the 233 mass shootings in the US this year, according to the Gun Violence Archive. CNN and the archive define a mass shooting as one in which at least four people are shot, excluding the shooter.

Louis, of Muskogee, a city roughly 45 miles southeast of Tulsa, had back surgery on May 19 performed by Phillips, and was released from a hospital May 24. He then called Phillips' office several times over several days, complaining of pain and wanting additional treatment, according to Franklin.

Louis saw Phillips on Tuesday for treatment, and called Phillips' office again on Wednesday before the shooting, "complaining of back pain and wanting additional assistance," Franklin said.

Police were initially alerted about the shooting in a 911 at 4:53 p.m. Wednesday. The call was made by someone off campus who'd been on a video chat with a doctor who was at the building, Franklin said.

"The doctor told her to call 911, saying there has been a shooting," Franklin said.

"We believe that was the final gunshot, with the suspect taking his own life," Franklin said.

At least one slain person was found in the same room as the gunman, as well as an uninjured female who was "hiding under a desk at the suspect's foot," Franklin said.

Phillips was an orthopedic surgeon at the clinic, with an interest in spinal surgery and joint reconstruction, the hospital system said.

The notion that anyone would go after Phillips is "mind blowing," said Dr. Cliff Robertson, president and CEO of Saint Francis Health System.

"He was -- he is -- a man that we should all strive to emulate, and of everybody, the fact that some individual would go after Dr. Philips is mind blowing," Robertson said. "He's one of those folks that ... his clinic can not always be on time because he will spend every minute with patients that they need."

"It is the ultimate loss for Saint Francis and for Tulsa," he said.

He also paid homage to Husen, a doctor of osteopathy who worked in the clinic's orthopedic department, and Glenn, the receptionist.

"The three best people in the entire world that are the most committed to doing what they do every day, and taking care of others, didn't deserve to die this way," Robertson said.

Saint Francis' associate chief medical officer, Dr. Ryan Parker, expressed condolences to the family of Love, the slain patient. "To the family of Mr. Love, I'm so sorry we couldn't save you," Parker said through tears at Thursday's news conference. "When I woke this morning, I really just wanted this to all be a bad dream, but this is the reality of our world right now."

Ruth Folly, a surgical technician at St. Francis Hospital, told CNN she'd gone on several medical missions with Phillips to Africa -- and that Phillips had a positive impact on many lives.

Phillips traveled yearly with the nonprofit organization Light in the World Development Foundation, which was founded by Phillips' colleague and Folly's father, Dr. Komi Folly, said Ruth Folly. The group aims to provide surgical services to those in need.

Phillips was scheduled to go on another mission to Togo in mid-June, she said.

"(He was a) guy you can rely on, and someone you want to have in your life because he was such a fun and loving guy," Ruth Folly said.

Lachelle Nathan told CNN affiliate KTUL that she had arrived in her vehicle with her daughter-in-law and grandchildren for a doctor's appointment when she saw multiple officers race toward the complex.

"It's awful, it's sad. My daughter-in-law is from Buffalo, so now it's so close to home. It's not even safe if you come outside anymore, you know?" Nathan said.

"I mean, you see it on TV," her daughter-in-law said, "but you don't think it's actually going to happen right in front of your eyes, so this is a wakeup call for my kids, this can really happen anywhere and it's very scary."

Debra Proctor was in another building on the hospital campus for an appointment when she heard police sirens.

"Police were everywhere in the parking lot, up and down the surrounding blocks," said Proctor, a registered nurse for more than four decades. "They were still arriving when I was leaving."

Kalen Davis, a lifelong Tulsa resident, was waiting in traffic around 5 p.m. local time when she saw multiple police cars responding to the scene.

In a video she shared with CNN, authorities can be seen running toward a building with their guns drawn. Two officers are seen taking long guns out of their trunks as more emergency vehicles race to the scene.

"I just knew that it was a shooting situation because I saw police running with rifles," Davis, 45, told CNN. "That's when I got emotional."

Correction: An earlier version of this story gave the wrong last name for victim Amanda Glenn due to incorrect information from police.