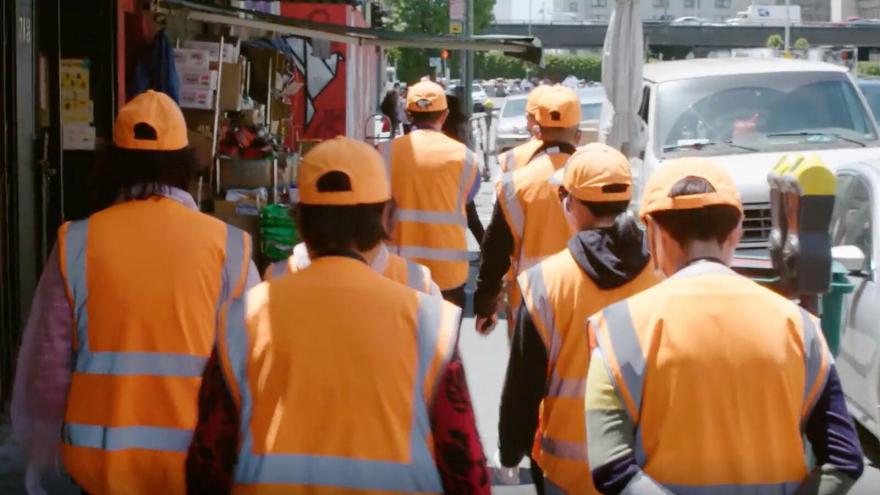 volunteer groups have emerged in the past year to patrol Asian neighborhoods in an effort to deter the racism and violent attacks that people of Asian descent have been subjected to in the past year.

(CNN) -- Carl Chan was walking in Oakland's Chinatown on his way to meet an Asian elder who had been attacked when a stranger called him a racial slur and hit him on the head.

"I am so fortunate to be able to live another day to tell my story," Chan told CNN.

As president of the neighborhood's chamber of commerce, Chan has closely seen how the Covid-19 pandemic and the wave of attacks on older Asians are keeping customers away. While police arrested a suspect, Chan says the April 29 incident motivated him even more to join a community foot patrol group.

From coast to coast, volunteer groups have emerged in the past year to patrol Asian neighborhoods in an effort to deter the racism and violent attacks that people of Asian descent have been subjected to in the past year.

In Oakland, about a dozen people wearing bright orange vests and caps daily comb the streets of Chinatown every day. They carry whistles and some even wear body cameras while they greet business owners and customers alike.

"We try to just show our presence to try to make sure that the individuals that might be out there don't try to commit any crimes," David Won, one of the volunteers, told CNN.

When the Covid-19 pandemic began, the number of people shopping at Oakland's Chinatown decreased significantly. Many businesses closed and those that were able to reopen have shortened their operating hours out of fear, Chan said.

The East Bay Toishan Association, a group of mostly seniors known for organizing social events and Tai Chi classes for people from Taishan in China's southern Guangdong province, created the foot patrol in February as the Bay Area saw a surge of anti-Asian attacks.

Won, a 59-year-old financial services professional who lives in Oakland, saw them while grocery shopping in the neighborhood and became curious about the group. He reached out to them and soon he began walking with them twice a week.

Won says he joined the group because "being out there is the right thing to do."

"I can't even imagine punching somebody so hard that you're going to break someone's nose or pulling someone's hair out," Won said about the anti-Asian violent attacks. "I can't even see how someone could actually even do that to another human being."

Volunteers are stepping up in other cities

Similar community watch groups have been created in several cities across the United States, including Seattle and New York.

At least four other groups in Oakland have patrolled the streets in the past year, trying to keep elders safe. Meanwhile, an emergency response team in San Jose, California, known for providing aid during natural disasters created a patrol unit in the city's Japantown.

Wan Chen, 37, couldn't "just sit around doing nothing" earlier this year when attacks surged in New York. At first, Chen tried contacting some of the victims, asking if they needed help because of language and cultural barriers.

"A lot of them were afraid just to even talk about what happened to them," Chen said.

Chen and a few others founded a group called Public Safety Patrol in Flushing, New York. About two dozen people, including city workers, waiters, students and drivers, have signed up to patrol with the group since March. Each shift, a person is responsible of video recording, another would take notes and a third person is responsible of communicating with police officers or community members.

"We are people trying to make a living for our families but at the same time we care about this community," Chen said.

Stop AAPI Hate, a center tracking reports of racism and discrimination against Asian Americans, has received more than 6,000 firsthand complaints since last year.

Last week, President Joe Biden signed into law a legislation aimed at countering the rise in anti-Asian hate crimes during the coronavirus pandemic.

"We heard out too many Asian Americans have been waking up each morning this past year, genuinely -- genuinely -- fearing for their safety," Biden said.

"Grandparents afraid to leave their homes even to get vaccinated, for fear of being attacked. Small business owners targeted and gunned down. Students worried about two things: Covid-19 and being bullied," he added.

A chance to 'turn that pain into action,' vice president says

Asian Americans have turned their pain and outrage into action in ways big and small, including the foot patrols. In a recent speech, Vice President Kamala Harris urged them to also consider using their political power.

"As a member of this community, I share in that outrage and grief, and I believe we have an opportunity now to turn that pain into action," she added.

While Asian Americans make up about 7% of the total US population, they were the fastest-growing segment of eligible voters among all major racial or ethnic groups between 2000 and 2020, according to a recent Pew Research Center analysis of US Census data.

Some AAPI cultures encourage people keep their heads down and remain unnoticed, experts say, but Trump's immigration policies and his rhetoric about the coronavirus' origins proved a galvanizing force for Asian American voters last year.

Nationally, Asian American turnout soared to record levels -- jumping from 49% in 2016 to 60% in 2020, according to an analysis by AAPI Data, which collects data and conducts policy research. Pacific Islander participation jumped from roughly 41% to nearly 56%.

"But there was kind of a collective realization during the pandemic that folks could not be silent and that we needed to be vocal," Varun Nikore, president of the AAPI Victory Fund has told CNN. "This has turned many more people in the AAPI community into activists instead of passive watchers of politics on TV."