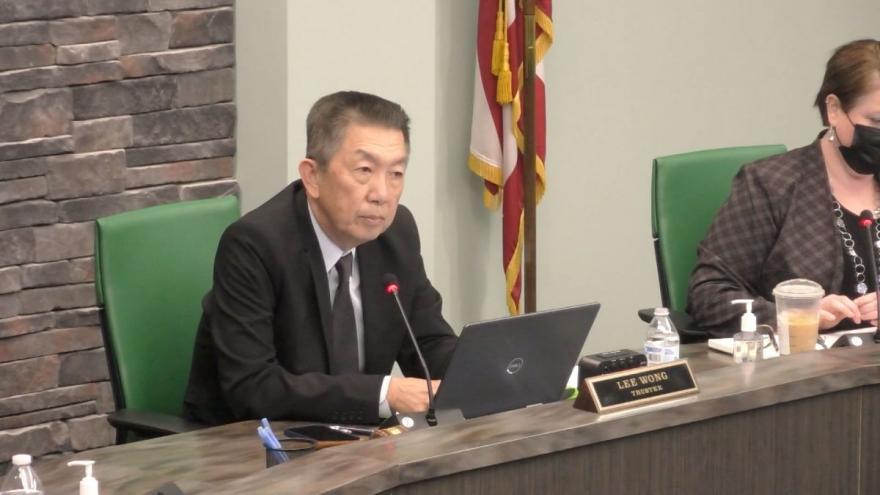 Elected official Lee Wong of Ohio, fed up with people questioning his patriotism because he's Asian American, bared his chest during a recent town meeting to reveal scars from injuries he suffered while in the US Army.

(CNN) -- An elected official in Ohio, fed up with people questioning his patriotism because he's Asian American, bared his chest during a recent town meeting to reveal scars from injuries he suffered while in the US Army.

Lee Wong, 69, says he came to America when he was 18 years old and has been a US citizen longer than many of his constituents have been alive. Wong retired from the Army after 20 years of active-duty service.p

"There are some ignorant people that will come up to me and say that I don't look American or patriotic enough," Wong said during a meeting of the West Chester Township Board of Trustees on March 23. "Now that just gets my goat."

"Here is my proof," he said pointing to his scars. "Now is this patriot enough?"

Wong has lived in West Chester Township, near Cincinnati, for about 20 years. He is president of the board of trustees and ran for a state Senate seat last year. He knocked on thousands of doors during his campaigns and said it's a dynamic and diverse community.

But he said anti-Asian sentiment has gotten "worse and worse" in the last few years for him and other members of the community, who he described as hardworking Americans.

Video of his speech has gone viral. Wong said he was surprised by the supportive comments and that friends in California had seen the video online.

Wong told CNN that he has always been self-conscious about his scars and isn't comfortable taking his shirt off -- even at the beach or a pool -- and decided to show his scars in the heat of the moment.

The scars are from multiple surgeries he underwent while he was in the Army to treat infected cuts he received during combat training in South Carolina.

Wong said he's ethnically Chinese, but was born in British Borneo, which is now part of Malaysia.

He told CNN that he's dealt with abuse and discrimination in silence -- ranging from children making racist facial gestures at him to being beaten up because of his race shortly after he came to America.

That attack derailed his plan to become a pharmacist and is one of the reasons he joined the Army.

He said he's heard from friends and family members across the country, who are afraid because of the recent surge of attacks against Asian Americans and the recent killings of eight people -- including six Asian American women -- at Atlanta-area spas.

Anti-Asian hate crimes are up 150% during the pandemic, according to the Center for the Study of Hate and Extremism at California State University, San Bernardino.

The violence is very disturbing and he has felt unsafe, he said.

"It has to stop. It just has to. I just felt that this is really going out of control here," he said. "A few ignorant people that insult all. Barbaric. Horrible."

Wong said he ran for office to make his community better and he hopes this experience helps restore the American values of compassion, love and kindness.

"That's my basic message, to be kind, and be a good citizen, to be a good role model," he said. "I mean, it's wrong to go out to hurt somebody just because they look different or they don't look American enough. We are America."