As Tulsa digs for victims of the 1921 race massacre, victims say the road to justice is a long one 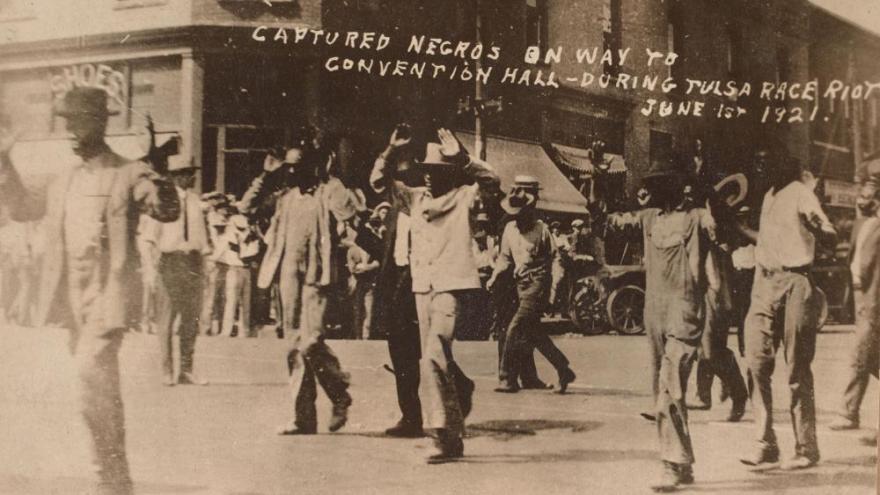 Men walk with their hands raised during the Tulsa massacre on June 1, 1921.

(CNN) -- One hundred years and a day after one of the country's bloodiest massacres of the 20th Century, the city of Tulsa, Oklahoma, on Tuesday will begin exhuming bodies possibly linked to the crimes.

The efforts to retrieve at least a dozen sets of remains -- which experts believe may belong to victims of the 1921 massacre on the city's Black Wall Street -- commences a day after a long Memorial Day weekend of events remembering the dark episode and honoring its victims.

On Tuesday morning, experts led in part by the Oklahoma Archaeological Survey will begin mapping and prepping the site located in Oaklawn Cemetery, near the headstones of massacre victims Eddie Lockard and Reuben Everett.

Though ground-penetrating radar identified 12 coffins, a funeral home ledger suggests there may be 18 bodies in the area. The excavation team is preparing for the possibility of finding as many as 30.

Heavy machinery will scrape off the first few feet of topsoil to begin the process.

"There may also be some hand-excavation, use of metal detectors, and screening of excavated soil -- depending on what is discovered during the first day," according to details released by the city. "At the same time, other research team members will be working to set up on-site workstations for artifact processing and laboratory analyses."

Once the bodies are exhumed, the city and its public oversight committee will determine the next steps for "storing remains, DNA testing and genealogical research, and commemorating the gravesites and honoring the remains," said a city news release.

The work -- which will unfold behind a screening fence with researchers, cultural monitors, historians, morticians, a forensic anthropologist and a videographer -- may take months, the city says. That's not counting the efforts to identify the bodies and determine if they are indeed victims of the massacre.

Yet, despite what appears to be an on-ramp to justice, some observers say the road is long and the direction isn't clear.

"I commend the city for doing something, but it is apparent that justice for the Greenwood community and for the survivors and for those who were killed is not a priority," said the Rev. Robert Turner of Historic Vernon AME Church, the basement of which survived the church's torching during the attack. He is also a member of the Tulsa Mass Graves Oversight Committee.

A descendant of massacre survivors has lambasted a plan, albeit now temporary, to inter victims in the same cemetery as the perpetrators of the attack. And a human rights watchdog has criticized Tulsa's refusal to deliver reparations to victims' relatives, despite the nonprofit Centennial Commission raising about $30 million in private funds -- the lion's share of which is earmarked for a history center.

Meanwhile, a lawsuit filed by descendants of victims, three centenarian survivors of the massacre and Turner's church demands reparations and accuses the city, Tulsa County and other defendants of "exploitation of the massacre for their own economic and political gain." Turner wishes reparations were as high a priority as finding the graves, he told CNN.

Tulsa spokesperson Michelle Brooks said the city cannot comment on pending litigation and emphasized that the funds raised for the history center were private, not taxpayer dollars. As for the pace of the excavations, Brooks pointed out that before Mayor G.T. Bynum was moved by the oral histories of victims to initiate the efforts, nothing had been done for 98 years.

The city wanted to wait until Tuesday to begin exhuming the bodies because the date is symbolic and because more archaeologists and experts would be available when school is out, she said. The process may be a drawn-out one, she said, as one archaeologist reported to the city that when the team started removing dirt from one of the coffins, it began to quickly deteriorate.

"That's why we're doing this the right way, at the right time, with the right people," Brooks said.

A beacon of Black opportunity destroyed

Recent efforts to resurrect the history have thrust the massacre into the public consciousness. The 2018 news that victims' bodies might have been found, along with plotlines from two popular TV shows -- HBO's "Lovecraft Country" and "Watchmen" -- have helped invigorate interest in the devastating saga. (CNN and HBO have the same parent company.)

Still, many details of what happened in Tulsa a century ago have been lost to time. No one even knows the death toll. It varies between dozens and hundreds.

It began on May 30, 1921, when Dick Rowland, a 19-year-old African American shoe shiner, ran from an elevator in a downtown building after the elevator's teen operator let out a scream. Bogus rumors of a rape circulated, Rowland was arrested, Whites formed a lynch mob, Black Tulsans arrived at the jail to defend Rowland, scuffles ensued, a gun went off, and as then-Sheriff William McCullough told Literary Digest, "All hell broke loose."

At the time, Tulsa had something most cities did not: The Greenwood District was a thriving Black hub of commerce, home to multiple millionaires and about 300 Black-owned businesses.

Thousands of White men, many of them armed and deputized, took up arms and traveled to the district following the jailhouse standoff.

The mob laid waste to about 35 blocks within 16 hours, arresting thousands of Black residents, while robbing, beating and killing others. Historic photos show entire blocks gutted by flame and African Americans lying in the street.

Exacerbating matters were insurance companies that denied many claims for what today would be tens of millions of dollars in property damage, including the destruction of two Black hospitals and 1,256 residences, according to the Greenwood Cultural Center.

"When the violence ended, Tulsa Negroes were homeless," the Journal of Black Studies noted in 1972.

'We were made refugees in our own country'

Viola Fletcher, who was 7 during the massacre, still remembers vivid images from that day, she told a House subcommittee this month.

"I will never forget the violence of the White mob when we left our home. I still see Black men being shot, Black bodies lying in the street. I still smell smoke and see fire. I still see Black businesses being burned. I still hear airplanes flying overhead. I hear the screams. I have lived through the massacre every day. Our country may forget this history, but I cannot," said Fletcher, who is party to the lawsuit against the city and county.

Pleading for congressional recognition, the 107-year-old continued, "We lost everything that day: our homes, our churches, our newspapers, our theaters, our lives. Greenwood represented all the best of what was possible for Black people in America and for all the people. No one cared about us for almost 100 years. We and our history have been forgotten, washed away."

Hughes Van Ellis, a 100-year-old World War II veteran who is part of the lawsuit, grew up with nothing after the mob robbed his family of what little they had, he told the subcommittee.

"We were made refugees in our own country," he said. "We live with it every day and the thought of what Greenwood was and what it could have been. We aren't just black-and-white pictures on a screen. We are flesh and blood. I was there when it happened. I am still here."

Chief Egunwale Amusan, who serves on Tulsa's Mass Graves Oversight Committee with the Rev. Turner, is the grandson and grand-nephew of massacre survivors. Only 40% of residents returned to Greenwood after the mob violence, he told Congress.

The laundry belonging to his grandfather's siblings was "burned to ashes," along with their home. They disappeared after the onslaught, Amusan said. His great uncle fled to Los Angeles and changed his name, he told lawmakers.

"One cannot imagine the trauma of not knowing if a family member is dead or alive. Now, I understand why my grandfather often said, 'No news is good news,'" he said.

'There's no expiration date on morality'

In 2018, calling it a "matter of basic human decency," Mayor Bynum prioritized investigating the gravesites, something he said he'd promised himself as a councilman he'd do if he ever had the power.

Oaklawn is just one of the potential gravesites. Other sites identified by the city are Newblock Park, an area outside Newblock Park, and the former Booker T. Washington Cemetery (now Rolling Oaks Memorial Gardens). The city plans to use ground-penetrating radar to seek out possible graves at Rolling Oaks in mid-June, Brooks, the city spokeswoman, said.

Amusan and Turner said they also believe victims' bodies were dumped in the Arkansas River and in an area now paved over for Interstate 244.

CNN could not reach Amusan for comment, but according to the Tulsa World, he spoke out against the idea of re-burying any victims in Oaklawn Cemetery because some of the perpetrators, including a reputed Klansman, reside there. He said he had spoken to other descendants who opposed the idea and likened it to burying Holocaust victims near Adolf Hitler.

City officials heard those concerns, Brooks said, and while the initial plan is to re-inter any bodies at Oaklawn on a temporary basis, they will not be buried there permanently. Amusan, Turner and the rest of the oversight committee will help determine their final resting place, she said.

As a pastor, Turner couldn't stress enough the importance of giving these souls their due, he said.

"They are people, children of God, who were killed brutally, and they never even had a funeral service. The ashes to ashes, dust to dust we say at the funeral is our symbolic way of releasing that person's soul to wherever it's going, and these people never had that," he said. "We have buried animals better than we handled the victims in Greenwood. We can do better."

Justice, however, is not solely about finding the bodies. It's also about repairing the victims and their descendants and holding the government and others accountable, Turner said, acknowledging that while the players have changed, Tulsa is the same city whose fire department watched Greenwood burn and whose police department arrested Black victims rather than the orchestrators of the assault. The sheriff's department is the same entity that deputized the mob, he said.