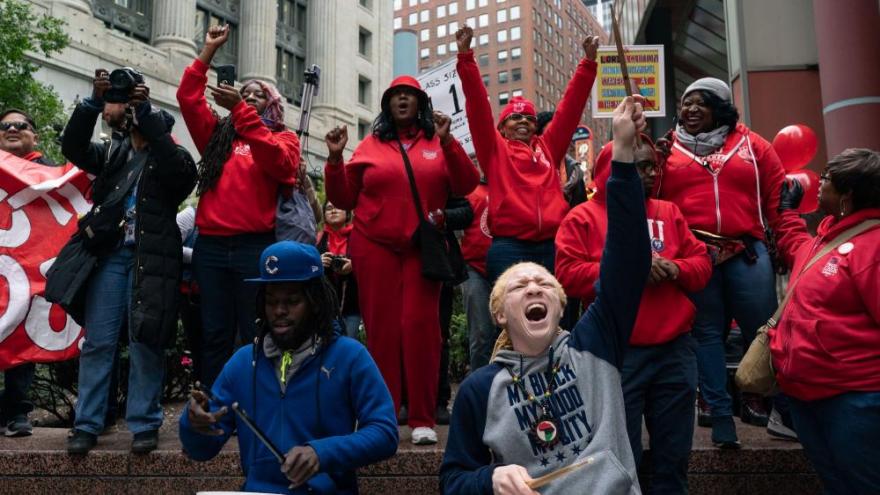 (CNN) -- The Chicago Teachers Union believes it has reached a tentative agreement, and says it is prepared to vote on it Wednesday night if Mayor Lori Lightfoot and officials agree to make up the instructional days lost during the strike.

Students in the country's third-biggest school district have missed 10 days of classes since the strike started.

School districts typically add the lost days to the end of the school year so the number of instructional days remains the same, CTU spokesman said Eric Ruder said in an email. Ruder said that issue, however, is settled in the process of agreeing to a new contract.

Lightfoot said previously that CPS is not planning to make up days lost by the strike by extending the school year, CNN affiliate WGN reported.

"The CTU may have reached a monumental agreement and want to convene our HoD to suspend the strike," CTU Vice President Stacy Davis Gates said in a statement.

CPS said: "Depending upon the outcome of their meeting, we will know if classes can resume tomorrow."

Chicago Teachers Union President Jesse Sharkey had told reporters Tuesday night that a vote to end the strike by the union's House of Delegates, which consists of more than 800 members, could happen Wednesday afternoon if a "tentative" agreement was reached.

Sharkey said the union negotiated with Chicago Mayor Lori Lightfoot until 5 p.m. Tuesday. At a news conference following the meeting, the mayor said she was "disappointed" that the sides had not yet come to a resolution.

"What's prolonging this strike is the unions' insistence on a shorter school day or school year and their insistences that I agree to support their political agenda," Lightfoot said.

Chicago Public Schools Superintendent Dr. Janice Jackson spoke along with the mayor, saying in part to teachers, "You have the power to end this strike and get our students back in classrooms tomorrow."

Jackson said the parties had resolved the "major" issues the union brought to them, including class sizes and higher pay for teachers.

While an agreement with the teachers remains unsettled, Chicago Public Schools did reach an initial deal on Monday with SEIU Local 73, the union representing school support staff.

"The lowest-paid support workers who are the backbone of our schools are going to see raises that mean their families won't have to struggle living in an expensive city where costs keep going up."

Members of that union joined the teachers' strike Monday. Palmer said they will continue protests until the teachers' union gets an appropriate contract as well.

Where the disagreement lies

Sharkey said he and city officials -- including Lightfoot -- have found some common ground.

"She wants to prioritize money and resources to some of our neediest schools. I get that. I think that makes sense. So we're part of the way there," the teachers' union president said Monday. "But there also needs to be something for schools that have massively oversized classes that are in other parts of the city."

What the teacher's union wants

The CTU has been fighting for smaller class sizes, as some classrooms have more than 40 students.

In a city where many children face poverty, violence or grief at a young age, teachers are pushing for more case managers, librarians and other support staff.

In addition to more staffing, "We've asked the (school) board to give us a little more time to do our jobs," Sharkey said.

Sharkey said he understands the growing frustration over the ongoing strike.

"No one wants a long strike. That's not what we set out to accomplish," he said.

"What we set out to accomplish was a fair settlement where we can look our students and each other in the eye and say, 'Yep, conditions are going to be better.