As the campaign closes, coronavirus remains the main event 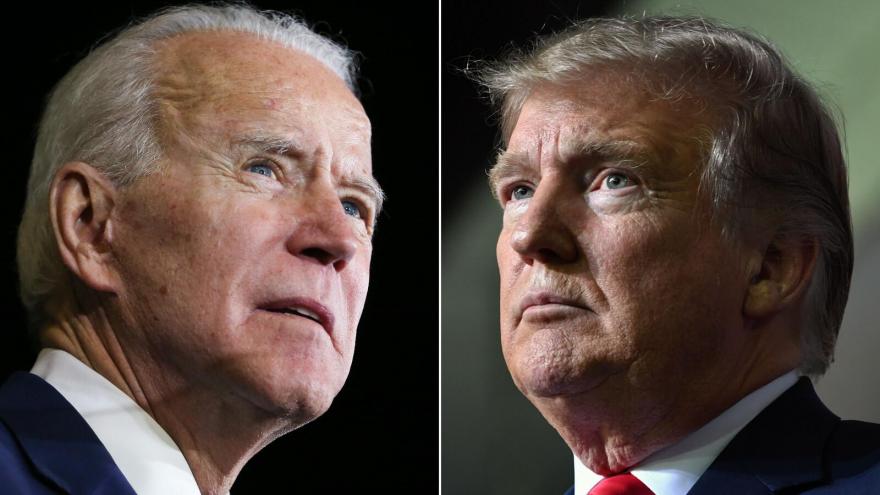 Coronavirus dominated what Americans heard, read or saw about this year's presidential election and was consistently a part of what they heard about President Donald Trump.

(CNN) -- Coronavirus dominated what Americans heard, read or saw about this year's presidential election and was consistently a part of what they heard about President Donald Trump. Americans recalled hearing about a larger variety of topics related to former Vice President Joe Biden throughout the campaign.

"Coronavirus" was the top used word for Trump 15 out of the last 18 weeks of the project. The words used for Biden varied, but the topic that reached first place the most times was "campaigning," hitting the top spot seven times. Over the course of the entire project, which began in late June, "coronavirus" was cited 3 times more often for Trump than for Biden.

But coronavirus wasn't always the same story for Trump. Analysis of other words within mentions of the topic found surges at different times for masks, stay-at-home orders, vaccines, and Bob Woodward's book "Rage," which focused on Trump's handling of the virus.

More recently, recalled news about coronavirus was related to Trump's own infection, with words and phrases following his diagnosis including "hospital," "test positive," "infect," and "recover."

Biden's words were less focused throughout the campaign, with much more variance depending on the week. For a few weeks, his top words surrounded news about his selection of Sen. Kamala Harris as his running mate, in step with significant recollection about the Democratic National Convention. This in contrast to Hillary Clinton's nomination of Sen. Tim Kaine in 2016, whose nomination made less of an impression in that year's version of this project.

The topic of race, racism and the Black Lives Matter protests appeared in Biden's top 3 topics in a number of ways throughout the campaign. In August, when he announced his selection of Harris, "Black" appeared a number of times in his top 20 words. Other instances of the topic of race came up when he called Trump the "first racist president" in July, and around his visit with Jacob Blake's family in Wisconsin.

Now and then, "health care" appeared in the top mentioned works for Biden, as well as "economy," more frequently. While "economy" appeared in Trump's top words with consistency, he never saw a single mention of health care in his top 20 words or phrases.

Other recent topics that made an impact for Biden were the debates and controversies. For Biden, the only significant mentions of controversial news about him have related to news about his son, Hunter Biden, and published emails that purport to detail his business dealings in Ukraine and in China. The emails have been seized upon by President Donald Trump, Republican allies in Congress and conservative media in the closing weeks of the election to attack the Democratic nominee. CNN has not determined the authenticity of the emails. The FBI is investigating whether the emails are connected to an ongoing Russian disinformation effort targeting the former vice president's campaign, according to a US official and a congressional source briefed on the matter.

Looking at the sentiment of words used about each candidate, Biden finished the campaign on a high note, with sentiment toward him near the highest level over the entire 18 weeks. On the whole, Biden's sentiment on recalled news generally tilted more positive than Trump's, with Biden's highest and Trump's lowest the week of the Democratic National Convention.

Trump's highest sentiment came a few weeks ago, after he was diagnosed with Covid-19. Even though his handling of the coronavirus pandemic garnered high disapproval in pre-election polling, the shift in focus to his health reduced the negative sentiment associated with the topic in this project across parties.

In the final week, fittingly, Trump's final word was coronavirus, with around 1 in 5 respondents who recalled news about Trump mentioning it. Biden's top word was "want," referring in part to him wanting to raise taxes and partly him wanting to raise the minimum wage. Coronavirus followed closely in mentions for Biden, but only about half as many people cited it for Biden as for Trump.

The word "win" appeared on both Trump and Biden's top 20 words, with people saying they will win the election. "Lose" also appeared on Trump's list, but not on Biden's.